In economics and finance, there is a phenomenon known as the “base effect”. People refer to base effects when a significant amount of the change in a given variable is a function of its level during the prior period. Last year at this time, earnings were collapsing; today, that collapse is making it look like they are surging.

Despite this backdrop of robust U.S. economic and profit growth, interest rates have been sending a more ominous message. While much of the move lower in rates has been technical, the spread of the Delta variant serves as a reminder that the return to normalcy may not be as easy as some had assumed. At the same time, recent economic data has disappointed relative to expectations, and a new set of economic projections from the Congressional Budget Office point to below-trend growth taking hold by 2023. In an environment characterized by uncertainty, elevated valuations become a greater risk.

Solid profit growth should help the equity market grow into its current valuation, and the current earnings season has been impressive. As of the week ending August 13, with 459 companies reporting (90.8% of market cap), our current estimate for 2Q21 S&P 500 operating earnings per share is USD 52.23. If realized, this would represent growth of nearly 95% from a year prior, but an increase of 10% on a quarter-over-quarter basis. Quarterly growth has moved from negative to positive territory since the earnings season began, as 85% of companies have beaten earnings estimates and 83% have beaten revenue estimates. Furthermore, both earnings and revenue surprises are tracking well above their long-run averages.

The biggest risk stems from the potential impact of supply chain disruptions, semiconductor shortages, and rising wages on profit margins. Various supply chain disruptions and extended wait times at various ports have pushed the price of moving cargoes (and therefore containership earnings) to the highest level seen in more than a decade.

These higher transportation costs are not the only thing pressuring margins. Rising input costs are a headwind as well, such as plastic, the raw materials needed to produce plastic, as well as soft commodities that are essential to production of food and beverages have all seen prices move higher. 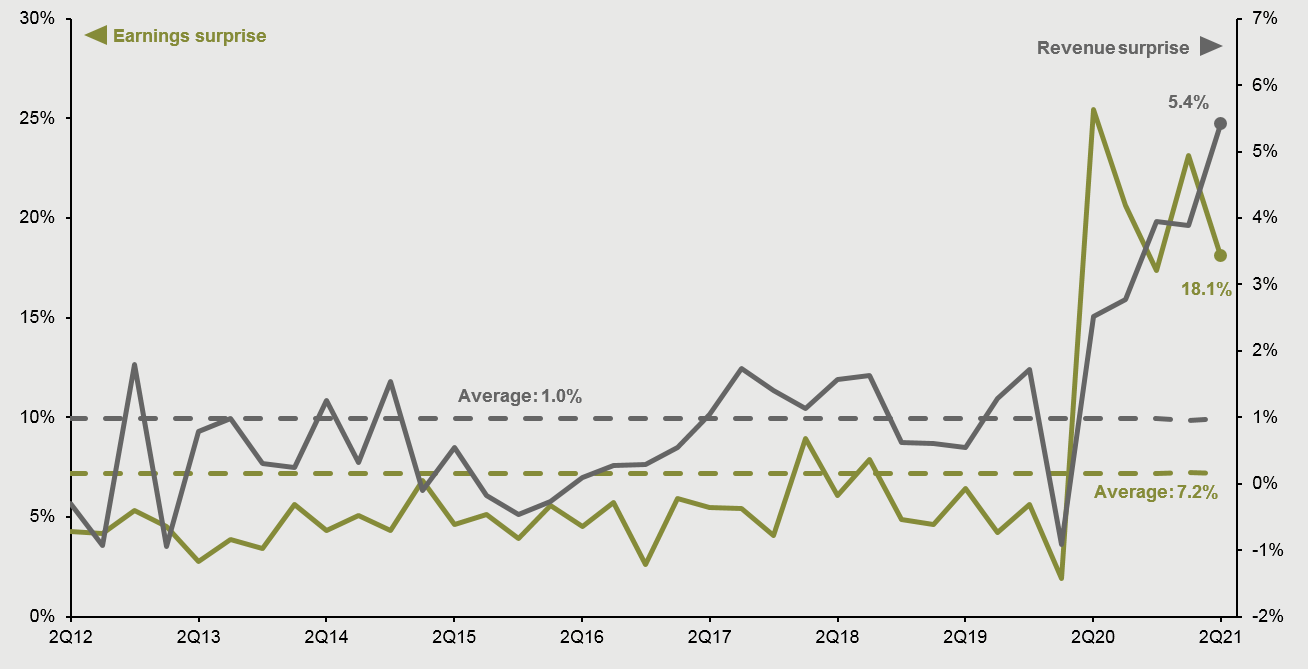 Company reports have cited strong orders, lean inventories, stretched lead times, and above-average pricing trends, many of which are all reflective of strong demand and lagging supply in the semiconductor market. This gap between supply and demand is expected to widen further as spending accelerates during the back half of 2021. On the supply side, producers have expressed confidence in growing capacity going before year-end; however, any expansion will be incremental and insufficient to close the gap. Additionally, while factories in Asia have remained open despite an increase in COVID-19 cases, many factories are operating at reduced output levels. Overall, supply-side indicators are tight across all markets, with some companies reporting lead times nearly twice as long as normal levels potentially into next year.

The combination of declining interest rates, fears about the Delta variant, and economic data that has disappointed relative to expectations has led growth to outperform value in recent weeks. As a result, more and more clients are actively rethinking their equity positioning into the end of the year. While it may be tempting to chase recent performance, we continue to anticipate that the second half will see interest rates move higher, repricing more in-line with the above-trend pace of economic activity that currently characterizes our forecasts. This should be supportive of cyclical assets broadly, and allow value to outperform growth.