Should investors hedge the currency when investing in international equities?

We would suggest allocating to international equities without hedging currency for two reasons: maximizing diversification and boosting total returns.

Over the last 15 years, international equities have underperformed U.S. equities by a cumulative 270%. Currency played a role in this underperformance, subtracting 25%, as foreign currencies steadily weakened against the U.S. dollar. Investors are left wondering: should they hedge currency exposure when investing in international equities? The reality is that in the short-term currencies are impossible to predict,  as they are prone to sudden swings. As Alan Greenspan once said about currency trading, “to my knowledge, no model projecting directional movements in exchange rates is significantly superior to tossing a coin.” Longer term, currencies do tend to revert to their fair value over time. As the U.S. dollar looks overvalued versus a basket of currencies, this suggests a depreciating trend over a multi-year horizon. Crucially, for portfolio construction, allocating to international equities on an unhedged basis helps to maximize the diversification benefits of the asset class and may boost long-term returns.

Despite coming into this year already overvalued, the U.S. dollar has appreciated 3.6% year-to-date. The biggest move occurred following Russia’s invasion of Ukraine due to: 1) a flight to safe haven assets (associated with U.S. markets), 2) widening growth differentials between the U.S. and the rest of the world, as growth downgrades have been larger in Europe (and China due to its “COVID zero” policy), and 3) widening interest rate differentials between the U.S. and other developed countries due to a quicker repricing of Fed rate hikes over the next 12 months. Given these risks, it is surprising the U.S. dollar has not strengthened more, suggesting some fatigue for this upward trend may be occurring.

Longer term, currencies should revert to their fair value based on structural economic drivers, such as trade balances (with the U.S. registering a record wide trade deficit in January) and growth and inflation differentials (which are less favorable for the U.S. than suggested by current currency levels). Based on these metrics, the U.S. dollar looks overvalued, suggesting a cycle of depreciation over a multi-year horizon. 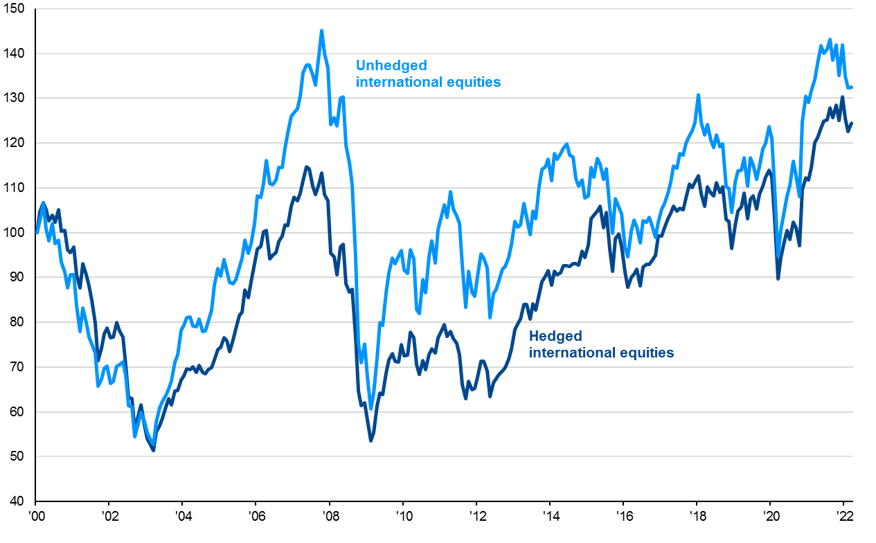