Yield Curve Inversion: Should We Trust the Alarm?

The yield curve, specifically its potential inversion, has become one of the most trusted signals of impending economic turmoil. The reason for this is shown in Exhibit 1: an inverted yield curve (typically when the U.S. 2-year Treasury yield is higher than the U.S. 10-year Treasury yield) has almost always been followed by a recession.

Yield curve discussions have become particularly relevant in recent months, with the curve presently within 0.25% of inversion after gradually flattening since late 2016. As we near inversion, investors have become increasingly nervous that we are approaching the end of the cycle and are pondering whether to derisk their portfolios. That said, there are a few aspects to consider when assessing the likelihood of a recession through this lens: first, yield curve flattening is very common at this stage in the cycle, especially when the Fed is raising interest rates; and second, the yield curve can stay flat for very long periods of time before inverting. In the late 1990s, for example, the yield curve remained flatter than today’s level for nearly three years before finally inverting in early 2000. With this in mind, the steepness of the curve is simply reflective of monetary policy: steepness suggests easy policy, inversion suggests that policy is too tight. Presently, the yield curve is telling us that monetary conditions are tightening but not yet too tight.

Should we trust the fire alarm?

Furthermore, when a fire alarm goes off, it tells you that there is a fire somewhere, but not where or when it will arrive at your door. Yield curve inversions have predated recessions by as little as five months and as many as 17 months, with an average lead time of 11 months. Meanwhile, the S&P 500 has, on average, peaked about six months prior to the start of a recession. Therefore, when the alarm does go off, investors should not panic, as there is typically plenty of time to work out the best course of action.

Investors would also be wise to question the present quality of the alarm. Since 2008, global central banks have adopted a number of unorthodox monetary policy tools to stimulate the economy, including asset purchases and negative interest rates. These policies have had some side effects, particularly in fixed income markets. As central banks gradually normalize monetary policy, there may in turn be knock-on effects to the shape of the yield curve. 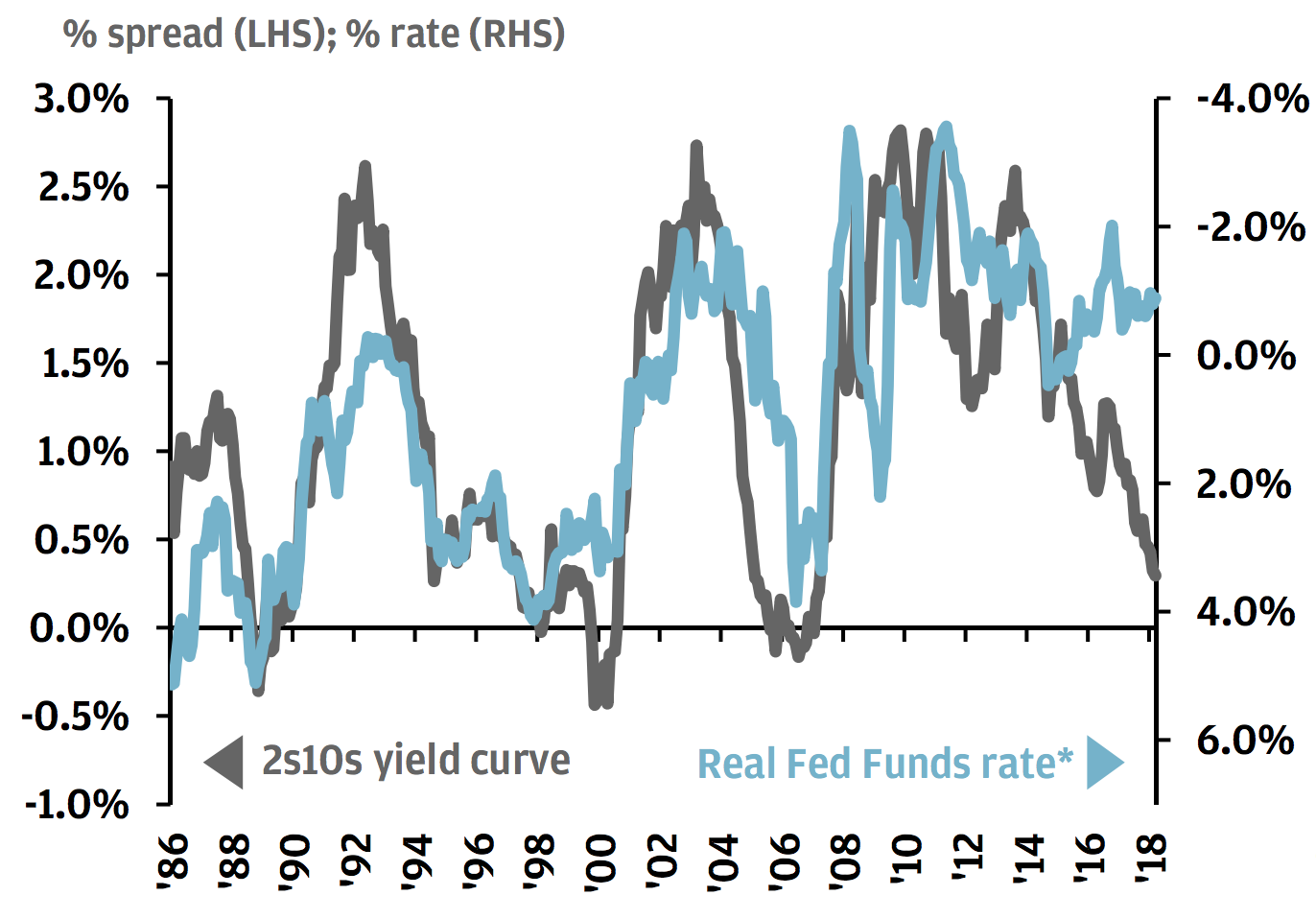 The impact of unorthodox monetary policy is reflected in Exhibit 2: prior to the Financial Crisis, the shape of the yield curve worked as an effective gauge of the tightness of financial conditions. However, this relationship has broken down recently, with central bank asset purchases having warped the back end of the curve. In short, the yield curve may not be as accurate at predicting the next recession as it has been in the past.

So where else should investors be looking? A recent Fed study highlights one such alternative indicator: the “near-term forward spread.” This indicator looks at the difference in yield between the present three-month Treasury bill and its expected yield six quarters from now.1  When the present yield is higher than the implied future yield, an impending recession is likely.

The theory behind this is sound: when the market starts to price in lower short-term yields in the futures market than the present short-term yield, monetary policy is expected to ease in the near future. This reflects a view that policy will be responding to the onset of a recession. 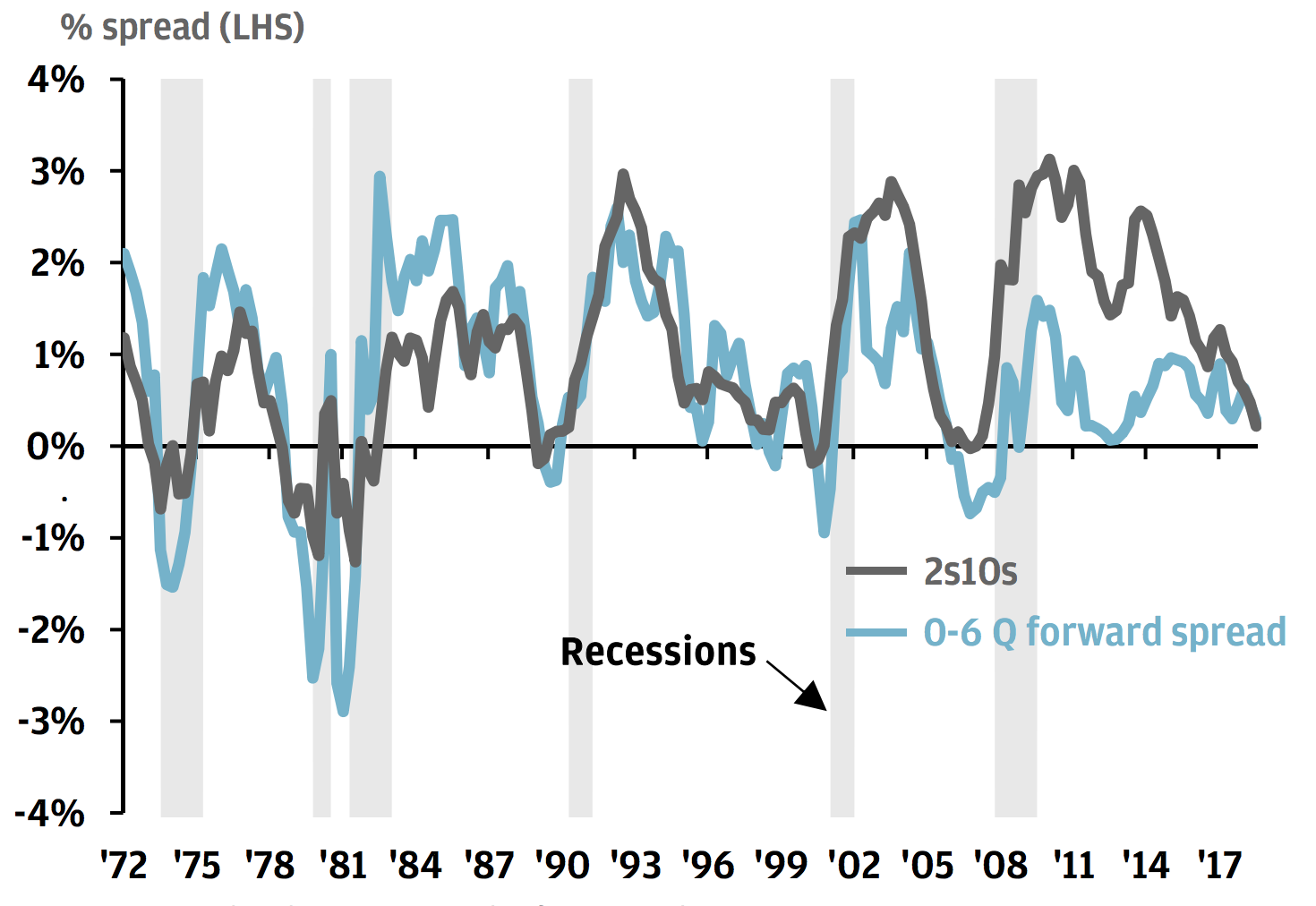 So which method is more reliable? Exhibit 3 compares the near-term forward spread indicator to the traditional 2-year versus 10-year measure. Prior to 2008, these two measures moved closely together, with a correlation of 0.72. However, in recent years these two measures have moved separately: since 2010, the correlation has fallen to 0.32. As the yield curve has flattened in recent years, the near-term forward spread has moved sideways, suggesting no signs of an approaching recession. Furthermore, since the near-term forward spread measure removes long-dated bonds from the analysis, it is less likely to have been affected by central bank policy, making it a more effective tool for judging the next recession. The good news for investors is that this empirically stronger measure is not showing signs of economic stress at this juncture.

So how should fixed income investors think about this flat yield curve? Tighter U.S. monetary policy has seen yields in fixed income slowly creep higher, which increases the attractiveness of bonds despite the higher-than-average duration of the bond market.

The reason is straightforward: as shown in Exhibit 4, the starting yield ultimately dictates the future total return. Today, the Bloomberg Barclays U.S. Aggregate yields 3.4%; historically, this has implied an annual return of approximately 4.5% over the next five years, low relative to long-term history but higher than in the last few years.2

In the shorter term, investors may still experience challenges in their fixed income holdings. The Fed is continuing to tighten monetary policy by shrinking the balance sheet and raising rates, which will put pressure on bond prices. But for long-term focused investors, higher yields in bond markets today should see better total returns in the future.

Feel free to call our InvestorLine or email us if you would like further information about our Funds or eTrading services: