Have bond yields and the dollar peaked for the cycle?

Is there a bigger market story this year than the sharp rise in bond yields? The U.S. 10-year Treasury (UST) yield moved from 1.51% at the start of the year, cresting above 4.20% in October and again in early November. The cumulative rise in yields from 2020 dwarfs every period since the early 1980s. And because lower starting yields mean less carry and longer duration, the price impact on a portfolio of intermediate-maturity Treasuries has been even more comparatively negative. The implications have been far-reaching, as the yield moves have accounted for a significant share of risk asset volatility.

In this report, we examine the key causes of this year’s higher yields consider where developed market (DM) yields might be headed in the year ahead, and contemplate the role of duration in multi-asset portfolios.

In hindsight, the drivers of most of this year’s rise in bond yields seem clear: stubbornly strong global inflation, the hawkish response from DM (ex-Japan) central banks, and the broader economy’s surprising insensitivity to much tighter financial conditions (which suggested a potentially higher-than-expected equilibrium policy rate).

In recent weeks, though, yields have declined by over 50 basis points (bps), coinciding with some backtracking in all the major fundamental factors that had driven yields higher. Published U.S. inflation data has been cooler than expected, central banks’ messaging suggests an inclination to slow the pace of policy tightening, and economic activity continues to decelerate.

In our base case, a continuation of these fundamental trends—slower inflation, a peaking of policy rates, and weaker growth—should push yields lower.

To be sure, we have low conviction in this base case view. One month of cooler inflation data hardly confirms a trend. And even as inflation and wage pressures are cooling from extremely hot levels, global economic slack remains exceptionally, and probably unsustainably, tight. The fact that central banks have signaled a slower pace of tightening ahead reflects a reasonable expectation that the delayed effects of monetary tightening already delivered will slow the economy enough to bring inflation down to central bank targets. But that outcome is far from guaranteed. .

We note another reason to avoid becoming too bullish on bonds: Market pricing has already reacted, perhaps a little too optimistically, to better inflation data. At the front end of the U.S. yield curve, investors have priced even sharper policy rate cuts following their peak next year, even as the risk of recession has arguably diminished. In addition, the deeply inverted U.S. yield curve may keep intermediate yields from declining significantly from here unless front-end yields also move lower.

Finally, while we expect only a modest impact from increased net supply of duration, including from DM quantitative tightening, this effect remains an additional risk that could push yields higher.

Taking all these uncertainties into account, our base case  sees U.S. yields moving lower across the curve over the next several months. On a probability-weighted basis, our forecast for the U.S. 10-year yield in one year comes in just below the market’s one-year-forward pricing (Exhibit 1). However, despite this modest difference, we would be wary of taking a meaningful overweight position given the wide range of potential yield outcomes around our central forecasts. These alternative outcomes hinge mainly on the future path of inflation and whether the economy enters a recession. Notably, a scenario where growth remains resilient and inflation stubbornly hot (we assign a 30% probability to this outcome) would likely push the U.S. 10-year yield to new cycle highs.

Our base case  sees U.S. yields moving lower across the curve 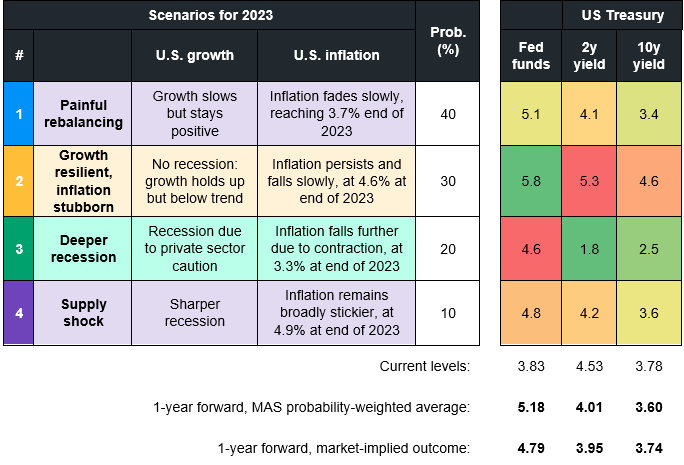 Wherever DM yields ultimately land in the next several months, we expect considerable interim market volatility. Investors will be highly sensitive to incoming data, most notably any surprises around U.S. inflation.

Although we are not contemplating a duration overweight, we are, in effect, adding duration indirectly. We do this through our preference for higher-yielding, higher-beta government bonds over their lower-yielding, lower-beta counterparts. Also, while a gradual downshift in inflation and the fading of central bank hawkishness are global narratives, regional differentiation also informs these relative value trades.

Within Europe, we favor higher-yielding Gilts, and are more bearish on lower-yielding Bunds and other core euro-area bonds.  This spread holds positive beta to global duration.

In the euro area, the European Central Bank (ECB), unlike the Federal Reserve (Fed), has not convincingly moved policy rates into restrictive territory. Inflation momentum is still relatively hot across Europe. As a result, we see room for further rate hikes, incoming quantitative tightening, and an inflation insurance premium, all of which should see European yields price a higher terminal rate.

In contrast, in the case of Gilts, we consider a sudden stop or reversal to the tightening cycle as a material risk. In the UK, underlying growth momentum is particularly weak due to scarring from both the pandemic and Brexit, which have depressed growth in the labor force.

Against this backdrop, the Bank of England, in comparison to the ECB, faces a greater risk that further tightening will tip the economy into recession, leading to a rate-cutting cycle. In our view, these factors cap how far long end Gilt yields can rise.

Similar dynamics are at play between Canadian government bonds, where we are modestly bearish, and U.S. Treasuries, which are our most favored overweight. Markets have priced a U.S. terminal rate above 5% vs. a Canadian terminal rate below 4.5%. With Canadian nominal wage pressures still accelerating, we believe it is too early for markets to credibly price an end to Bank of Canada (BoC) rate hikes.

Yields on U.S. 10-year Treasuries are now over 70bps higher than their Canadian counterparts, the widest spread in decades. We believe current valuations materially underprice the likelihood that Fed and BoC policies converge to some extent (with yields on 10-year USTs moving lower and 10-year Canadian bonds moving higher).

Finally, we view Japanese government bonds as a lower-yielding market to underweight. Anchored to low levels by negative interest rate policy, we anticipate short and intermediate term yields to trade with low beta to global duration. However, as the end of Governor Haruhiko Kuroda’s term at the Bank of Japan approaches, inflation remains above target.

As a result, we view the 10-year sector of the curve as biased to pricing an adjustment and potential outright exit to yield curve control (YCC). If the BoJ widens the YCC band, markets would reprice JGB yields sharply higher.

Throughout this year, the U.S. dollar (USD) has significantly and broadly appreciated. This coincided with a rise in global policy rate expectations and government bond yields, trends that were more pronounced in the U.S. than in its key trading partners. Today, we anticipate the U.S. hiking cycle is nearing its conclusion. We expect that higher-yielding, higher-beta U.S. yields are biased lower relative to their peers. That implies that U.S. dollar has most likely already peaked.

Moreover, other factors that have been tailwinds to the USD are probably fading. Most notably, European growth momentum and risks are stabilizing. The energy supply situation has improved, and recent economic activity has been surprisingly resilient, helped in part by fiscal transfer payments to both households and businesses. A European recession, though still likely, should be modest. In the near term, the ECB could see its way clear to further tightening policy rates, which would be positive for the euro.

Our FX views echo our relative value views in duration. At current valuations, we thus prefer low-yielding currencies over high-yielders. Higher yields are biased to fall more than lower yields, which should compress interest rate differentials and lead to depreciation of higher-yielding currencies.

Our multi-asset portfolios remain roughly neutral on duration, given the wide range of potential intermediate-term outcomes and elevated bond volatility. Still, if yields were to back up, we would be biased to add duration. As discussed, we see safer opportunities to add duration indirectly, including our preference for higher-yielding markets like the U.S., with our remaining bond underweights concentrated in Germany and Japan.up-in-quality approach, expecting that decelerating global growth will widen

We remain modestly underweight equities. consistent with our continued expectations for below-trend growth in the U.S. We underweight credit overall in the near-term and maintain an up-in-quality bias. In our view, further deceleration in global activity will likely widen spreads and create better entry points in the months ahead. 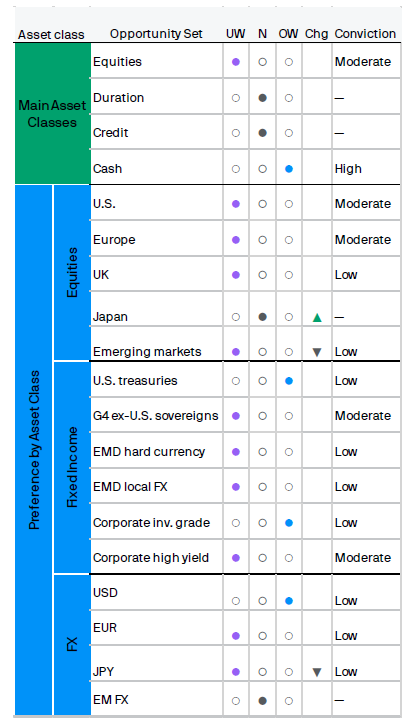 The tick chart and views expressed in this note reflect the information and data available up to September 2022.