On the Minds of Investors
How should investors position for a yield curve inversion?

The current backdrop suggests investors should remained broadly balanced within portfolios: risk assets could benefit from a potential strong late-cycle rally, while duration still serves as a useful hedge against an equity sell off.

An inverted yield curve driven by short rates rising more than long-term yields has preceded every US recession since 1960 and is therefore a closely watched metric among investors regarding the outlook for the economy and markets. The curve, as measured by the 2s/10s spread, has been flattening through most of the year and currently sits at just under 25 bps. With elevated inflation and a strong labor market, the Fed seems intent on delivering a series of rate increases beginning in March. Meanwhile, given the low probability of an immediate peaceful resolution overseas, long-term yields are expected to remain suppressed, likely leading to a further flattening bias in the curve in the coming months. With the potential for a yield curve inversion—indeed, the 1-yr. forward 2s/10s curve has already inverted— investors are concerned if a recession may be imminent and if so, how to position within portfolios?

While it’s likely the curve could invert sometime this year, there a few things investors should consider:

It should also be emphasized that while bear flattening is a common occurrence as the Fed begins hiking rates, long-term rates have fallen—like the brief inversion in 2019—suggesting markets may be more concerned about a potential growth scare, rather than a policy error. This is further corroborated by the fall in real yields and rise in inflation breakevens, a backdrop of looser policy. That said, the current backdrop suggests investors should remained broadly balanced within portfolios: risk assets could benefit from a potential strong late-cycle rally, while duration still serves as a useful hedge against an equity sell off.

Bear flattening is common leading up to curve inversions*
3-month change in nominal 2- and 10-yr. TSY yields prior to inversion, basis points 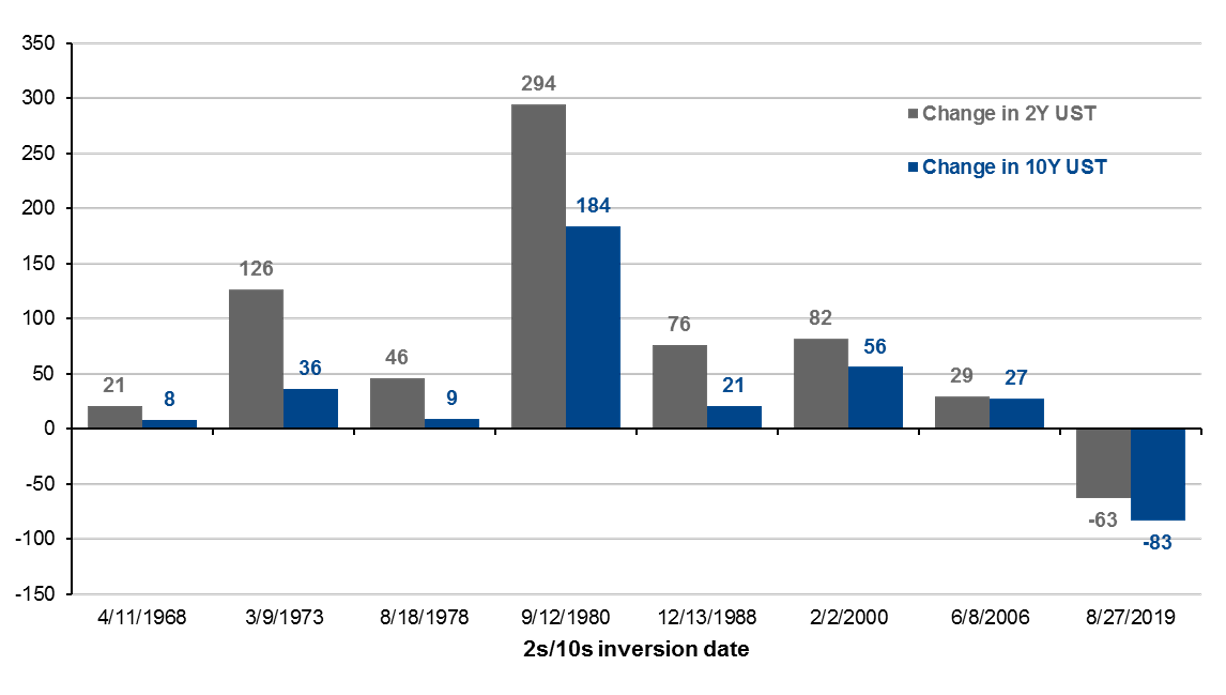 Source: Federal Reserve, FactSet, J.P. Morgan Asset Management. Prior to June 1976, the 1-yr. yield is substituted for the 2 yr. yield due to data availability. *Bear flattening occurs when short term rates rise faster than long term rates.
Data are as of March 7, 2022.