Answers to the key investor questions on the Russia/Ukraine conflict

As the events in Ukraine continue to unfold, this note seeks to answer the economic and market questions from investors around the world.

How will the crisis affect global energy prices?

Russia accounts for 13% of global oil production and 17% of global natural gas production. However, the European Union’s (EU’s) reliance on Russian energy sources is far greater: around a quarter of EU crude oil imports and 40% of natural gas imports currently come from Russia. There is only limited scope for the EU to offset any disruption in supply by accelerating imports from other sources, and recent price swings have been exacerbated by the fact that EU energy stocks started winter at depleted levels after an unusually cold autumn. Sanctions imposed to date have been designed to minimise the impact on energy supply, but energy prices will remain highly sensitive to further developments.

The risk to energy prices is asymmetric. We could see significant moves higher in the event that concerns around supply disruption worsen. If the situation calms, we would expect energy prices to decline but the tight supply/demand balance in the market is likely to keep prices at elevated levels relative to history. There are other possible sources of supply that may help to restore demand and supply balance in the long run. This includes sanctions against Iran being lifted if the nuclear agreement is restored, release of global strategic reserves and an increase in production capacity by other oil-producing countries, including the U.S. However, this would still take time and would be unable to address the short-term disruptions.

Will USD100/barrel lead to a recession?

In our opinion, not for the U.S.. Our judgment is that middle- to upper-income consumers have sufficient savings from the pandemic to support spending. We expect lower income households to receive government subsidies. U.S. President Joe Biden is likely to try to find new legislation to push through an extension for the family tax credits. In addition, although inflation is high, low unemployment is spurring rising wages, with low-wage earners experiencing the strongest gains. In the U.S., inflation has accelerated to 7.5% but real incomes have been at least supported by an acceleration in wage growth of more than 5%.

This would be more of a challenge for mid- to-low income emerging and Asian economies since their households spend a higher proportion of their income on food and energy, while not enjoying the benefit of higher wages. Their governments could need to step up fiscal support, including fuel tax cuts or energy subsidies, to offset higher spending on these necessities to protect discretionary spending.

Will central banks have to hike more rapidly in the face of higher commodity-driven inflation?

In our opinion, no. We expect central banks to prioritise growth and thus see central banks normalising policy more gradually as they acknowledge the downside risk that higher commodity prices present to growth. Market pricing for a 50-basis-point hike from the Federal Reserve (Fed) and the Bank of England (BoE) at their next meeting has fallen to 20%, whereas in previous weeks it had been as high as 80%. Market pricing for policy rates by the end of the year has also fallen, with investors now expecting at least one fewer hike from both the Fed and the BoE than they did a few weeks ago.

For Asian central banks, the urgency to follow the Fed was low before the Ukraine crisis. Inflation in the region is manageable and many Asian economies are still at an early stage of pandemic recovery. The latest rise in commodity prices should reinforce their cautious tone.

Which regions are more vulnerable?

The European economy is the most exposed given its high dependency on Russian energy. We see the extreme scenario where Russia cuts off all gas supplies as unlikely given the effects it would have on Russia’s income. Europe’s banking system is also exposed. But according to the Bank for International Settlements the total exposure is USD 89billion, which appears manageable. Our judgment is also that the ECB has the most scope to slow the pace of monetary tightening because wage pressures are less acute, which should cushion economic activity and spreads in the periphery.

The U.S. consumer can be sensitive to rising gasoline prices, but the oil and gas sector tends to benefit from increased activity. The U.S. became a significant net exporter of energy in 2019, so periods of higher oil prices are not as detrimental to activity as we saw historically.

In the emerging world, there are winners and losers. Commodity exporters are benefitting from higher prices. However, unlike in the developed world, central banks may be forced to tighten policy in the face of rising inflation which would slow activity. There is therefore a significant dispersion of market performance amongst emerging market (EM) benchmarks. MSCI EM Asia is down over 6% in the last two weeks, while EM LATAM has fallen less than 2%. For Asia, while most economies are net energy importers, their current account surpluses should provide some protection against currency depreciation. Asia’s real rate differential against the U.S. dollar is also at a multi-year high and this offers additional buffer. 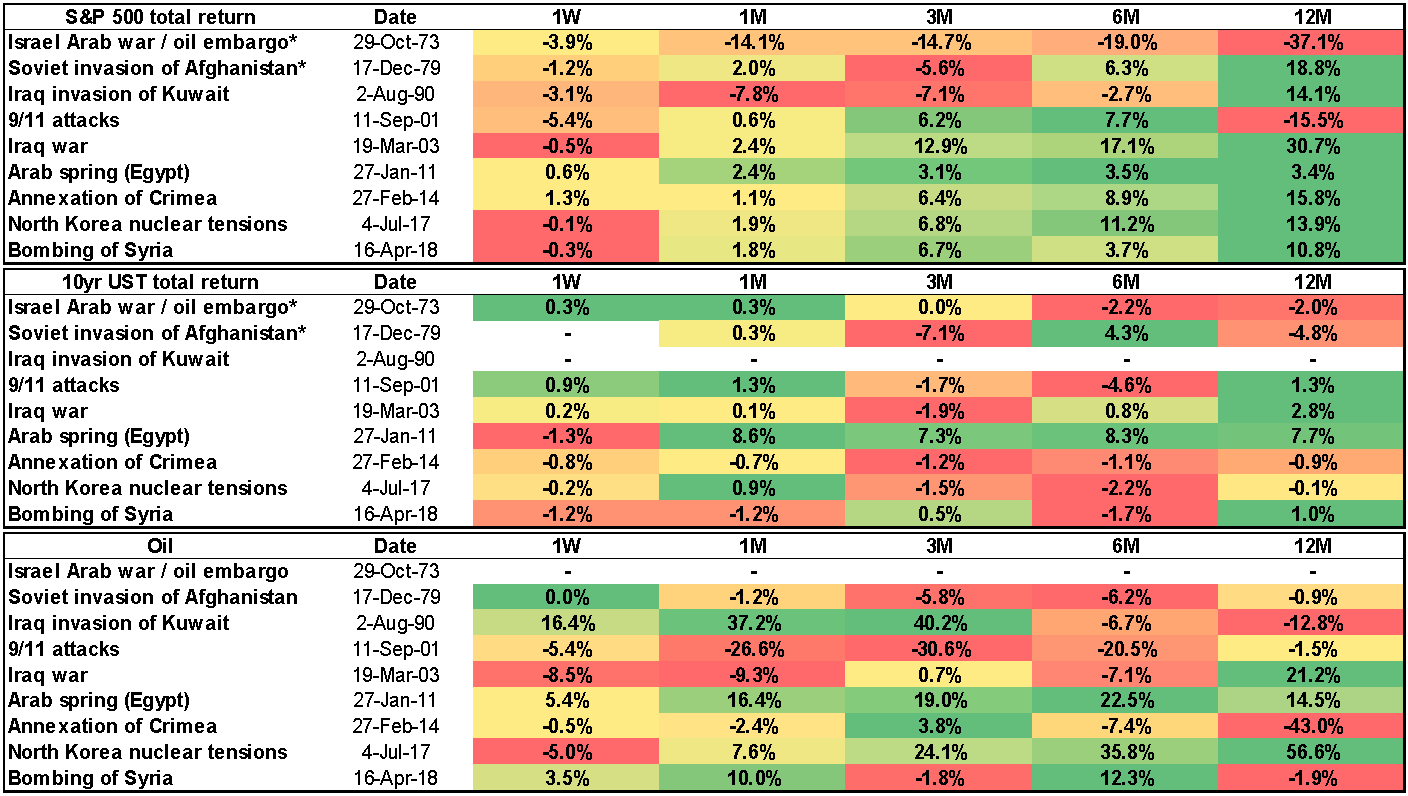 Historically, geopolitical events, even those involving major energy producers, have not had a lasting impact on markets. Looking back at equity market sell-offs relating to geopolitical events, they have tended to be short and sharp, with sell-offs not lasting much longer than a month as markets react to the sudden event. The size of the market reaction can be considerable, as it has been in this instance, with equities sometimes falling more than 10%. But in most previous geopolitical incidents, markets have tended to recover to their prior levels in under a month, after investors assess that the macro environment has not materially changed. Of course, if the growth backdrop has materially changed, as it did with the 1973 oil shock, then it can lead to a more material sell-off and a longer period to recover losses.

De-risking a portfolio might be tempting given the potential consequences of a meaningful prolonged period of conflict between Russia and the west. However, it is possible that absent the introduction of energy-focused sanctions, investors could turn back to the broader 2022 narrative relatively quickly: one of modestly higher interest rates and a rotation of performance towards value segments of the market, which benefitted benchmarks like Europe.

One thing does seem abundantly clear: in the short term and long term, we expect the crisis to intensify the investment in the transition towards renewables as higher energy prices and fears of energy security add to existing climate concerns.