Investors are long familiar with the influential role China plays in the global economy and the vast potential of its domestic capital markets. The US$13.9 trillion Chinese bond market1 has grown more than sixtyfold over the past 20 years, from US$214.6 billion in 2000, and has overtaken Japan as the second largest in the world. While the government bond yields for most developed markets have approached zero or even negative on the back of massive quantitative easing, China offers the highest government bond yield1 among the world’s largest fixed income markets.

The launch of Bond Connect and inclusion of Chinese bonds in major indices4 have brought about ample investing opportunities for Chinese bonds, where foreign ownership remains at a relatively low level. Index inclusion in major global fixed income indices will likely lead to over US$250 billion of passive inflows to the Chinese bond markets5.

Not all Chinese bonds are the same

The world of Chinese bonds is composed of three distinct markets:

Different segments of Chinese bonds come with distinct characteristics. Relatively small in size, China’s offshore bond markets have seen issuers of higher quality in general, with a forecast default rate for 2020 similar to that of Asia and lower than those of emerging markets (EM) and the US.

In times of uncertainty, allocating to low or uncorrelated assets could help diversify3 investment sources within a portfolio. Both onshore and offshore China bonds exhibit a lower correlation with global aggregate and developed market bonds when compared with those in EM, while offering relatively attractive risk-adjusted returns. 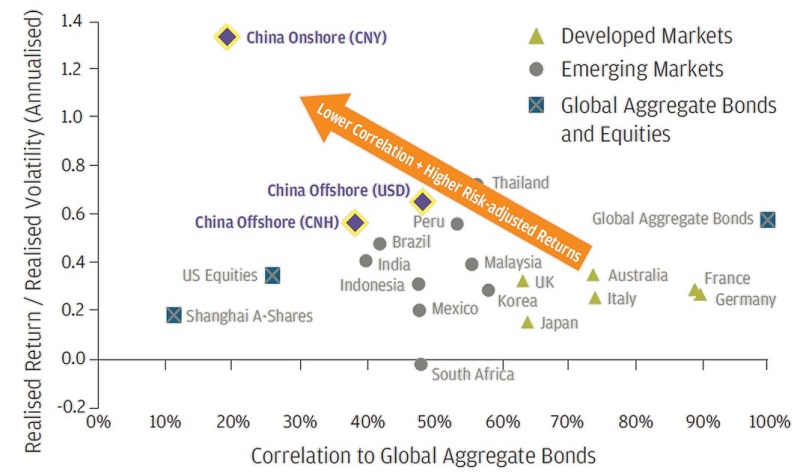 In addition, higher allocation to Chinese assets could mean greater currency diversification3. Getting exposure to domestic Chinese asset markets means getting Chinese renminbi (RMB) exposure. The RMB became a reserve currency in 2015, but so far has not gained significant traction in terms of usage. This could change now that investors have access to several assets priced in RMB.

Risk-free rates and cash returns are likely to stay low for an extended period of time as we expect the recovery process from the acute respiratory pandemic’s economic fallout to be gradual. In times of market uncertainty and with the global economy in a recession, it has become tougher for global investors to find income.

The income potential of Chinese bonds is becoming more appealing. Chinese government bond yield, for example, is relatively attractive compared with US Treasury yield even after hedging9.

Focus on flexibility and quality

Not limited by any benchmark, JPMorgan Funds – China Bond Opportunities Fund invests flexibly across the onshore and offshore Chinese bond markets. The Fund may include bonds and debt securities issued by governments and their agencies, financial institutions as well as corporates to capture the diverse opportunities in varying market conditions. Annualised yield of the Fund’s USD (mth) Class is 5.67%10. (Aim at monthly distribution. Dividend rate is not guaranteed. Distributions may be paid from capital. Refer to important information 3)

With a focus on quality, the Fund allocates at least 50% of the portfolio in securities that are rated investment grade at the time of purchase. The average credit rating is BBB, as of end-April 202012.

Chinese bonds look set to become more prevalent in bond investors’ portfolios2 with initiatives such as Bond Connect and the inclusion in major indices4. As the search for income becomes tougher, investors could consider the US$13.9 trillion Chinese bond market1 for potential income and diversification3 opportunities.

Provided for information only based on market conditions as of date of publication, not to be construed as investment recommendation or advice. Forecasts/ estimates may or may not come to pass.