This has been quite a midsummer’s nightmare for investors, coming off an escalation of US-China trade tensions, a debate over the renminbi, slowing growth in major economies, alongside a frenzy in the bond markets over curve inversions.

Against this backdrop, our Global Fixed Income, Currency & Commodities Team believes this turbulent period could serve as a good environment to engage in active investing within Asian debt markets to find income opportunities and manage risks.

Top-down: What do the latest tariffs mean for Asia?

Despite all the negativity, the good news is we’ve already had quite a few rounds of trade tariffs to serve as a guide of what to expect:

Assuming more tariffs to come, economic data is likely to decelerate further but may also prompt increased policy response by Asian central banks to ease and offset growth headwinds. Rate cuts would be positive for local bond duration (i.e. local bonds with longer maturities) but could also be negative for some Asian currencies due to interest rate differentials versus the US.

As such, based on their investment objectives and risk appetite, investors could consider keeping exposure towards longer maturity local government bonds coupled with active management in currency risks1.

Whilst the top-down approach suggests exposure to longer maturity bonds, we believe there are also potential opportunities from bottom-up selection - especially in a backdrop of increasing negative-yielding debt in developed markets.

Asia, in particular, has potential opportunities as some Asian markets have lagged the US Treasuries rally. Meanwhile, most bonds are still positive yielding2. 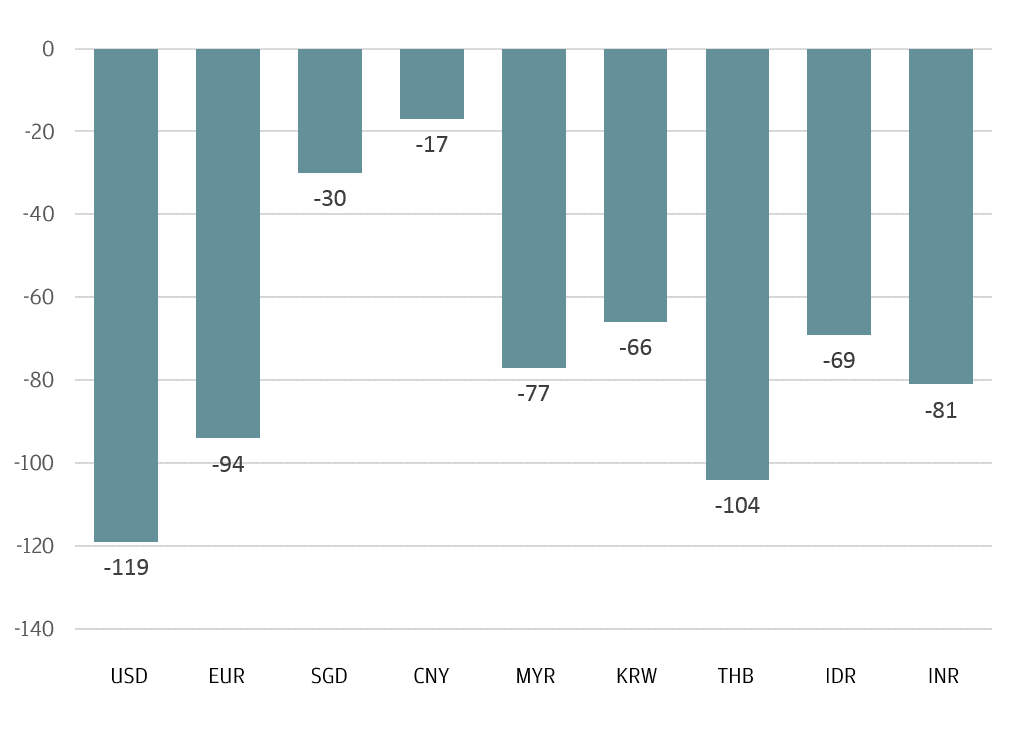 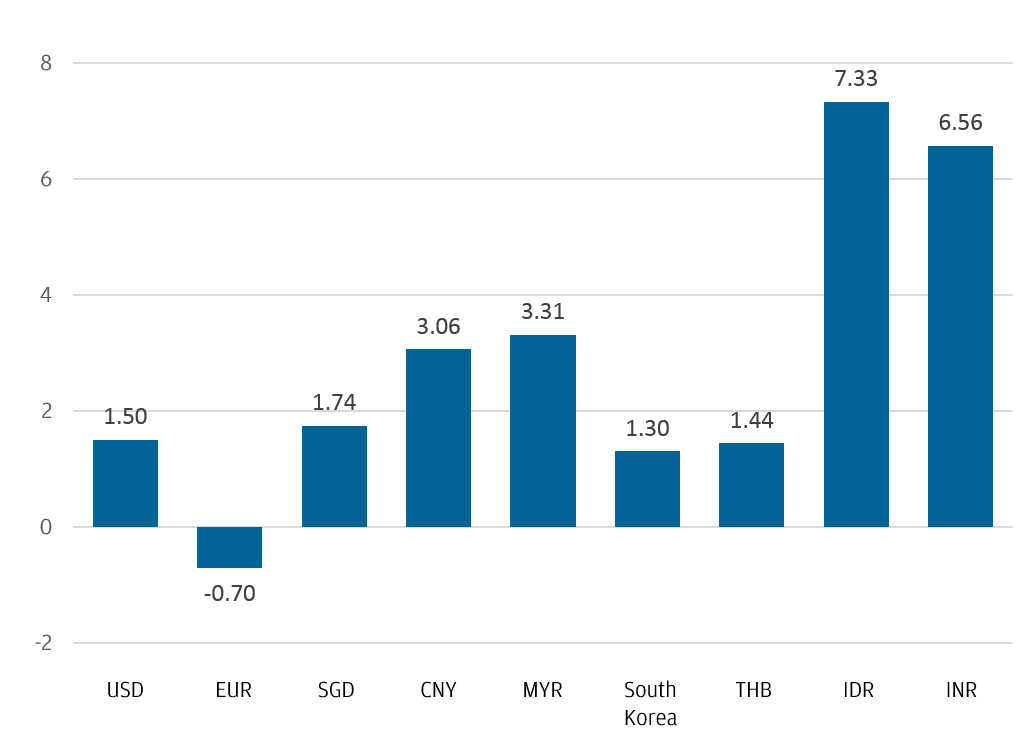 The key idea for us, is to find a middle ground between countries that offer potentially attractive bond yield, but also have additional policy headroom for more easing if the economic climate deteriorates further. In our opinion, some opportunities in this backdrop include1:

Although there is a compelling investment case for buying local government bonds, one should not simply gain exposure by passively investing in index names.

As shown below, the returns of local currency government bonds so far this year were diverse and offered opportunities for investors. In particular, some investments would have benefited from tactical foreign exchange hedging and long duration bias, while some others such as the Philippines and Thailand did remarkably well regardless of currency hedges. 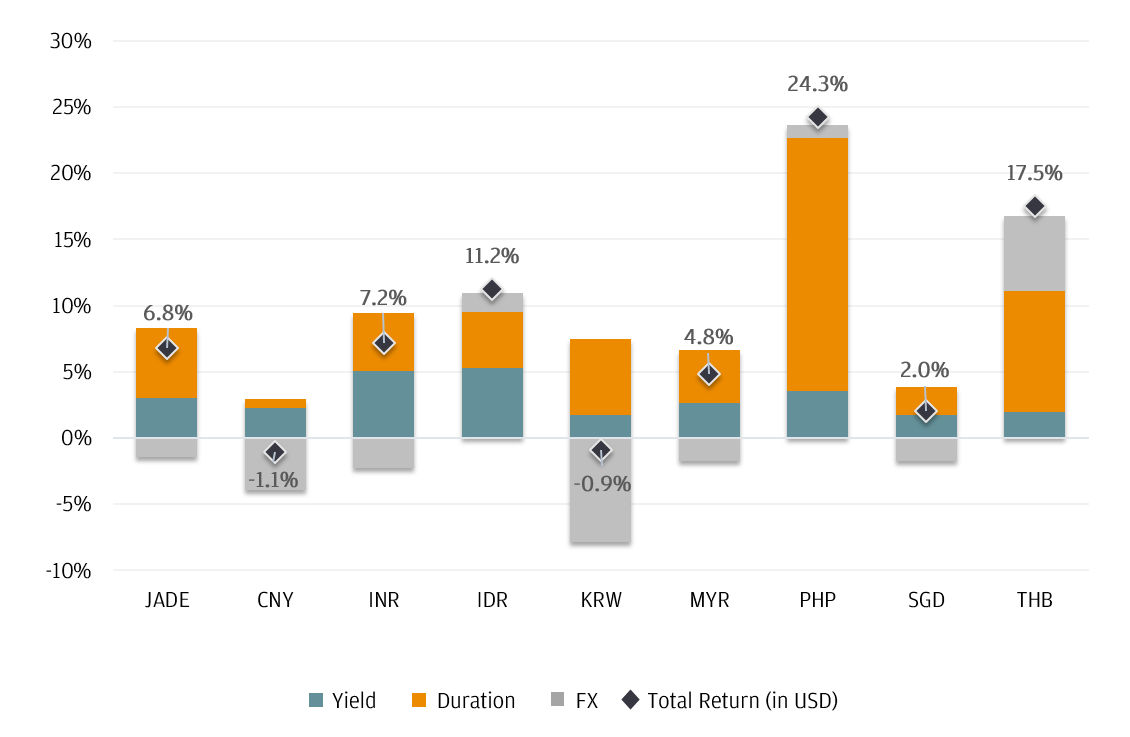 Amid elevated uncertainty and volatility, we believe a more active management style is critical for investors. This is particularly so in strategies with the ability to capture returns resulting from macro themes as we are more likely to have further episodes of start-stop on risk sentiment, followed by roller-coaster thrills in asset pricing for the time being. It is thus imperative for investors to utilise skilled security selection to navigate the markets.

Investment involves risk. Not all investments are suitable for all investors. Investors should consult professional advice before investing. Investments are not similar to or comparable with fixed deposits. The opinions and views expressed here are as of the date of this publication, which are subject to change and are not to be taken as or construed as investment advice. Estimates, assumptions and projections are provided for information only and may or may not come to pass. This document has not been reviewed by the SFC. Issued by JPMorgan Funds (Asia) Limited.

Is this an optimal time to hold Asian bonds?

Investors are urged to remain calm and rational in their investing decisions, and to keep a long-term investment horizon with a high-quality and diversified allocation for potential income opportunities.

Inside a portfolio: ABS, MBS in 4 minutes

Make equities a partner in your multi-asset journey

How equities could still play a role in your multi-income portfolio.

Go ‘West’ in the search for quality high yield

Move towards quality fixed income for more resilience in a multi-income portfolio.

Yield can still be found in a low rate, low inflation and low yield environment.

Chasing yield during the trade turmoil

How can investors keep a balanced risk and return profile amid geopolitical volatilities?

The A.B.C. of multi-asset income investing

Learn the A.B.C. in multi-asset income investing to add resilience to your portfolio.

Go beyond traditional with agency MBS in multi-asset income

Agency MBS could be a source of income for yield seekers who also want to manage risk.

Applying the “three lines of defense” in multi-asset income

As interest rates stay low, government bonds are not the only option as defensive plays.

Our answers for three bond questions investors may ask.

Tapping more than one income sources could help enhance income and cushion risks.

Hunt for income as the Fed stays dovish

As low yields are likely to persist, income is playing an increasingly important role.