The Three Phases Model guides positioning for Quantitative Tightening, but with some new monetary quirks.  Risk-off with simultaneously rising yields might not persist much longer.

Back in 2018, I published a series of notes* proposing and then updating a framework for how Quantitative Tightening (QT) might impact both markets and the underlying economy. That was a volatile time, and unfortunately the monetary-policy-induced volatility has returned with a vengeance.  The framework, the Three Phases Model, is once again serving as our guide in navigating the current episode of excruciating policy transition, albeit with at least one major new factor: the impact of the Fed’s reverse repo facility (RRP).  Today I begin with a brief reintroduction to the Three Phases Model, and then update it for the current market and monetary context.

We are convinced that Quantitative Easing (QE) causes asset price inflation.  On its own, QE likely does not cause consumer price inflation, however when coupled with Modern Monetary Theory-Financed Fiscal Transfers as was the case in 2020 and 2021, consumer price inflation is the inevitable icing on the inflationary cake.  QE’s principal mechanism for affecting mostly asset prices (instead of consumer prices) is not fully understood, but the way we see it is fairly simple. The world’s wealth can be stored in only two places:  cash and everything else (non-cash assets).  The world has an equilibrium allocation between the two buckets, considering relative risk, return, liquidity and so on.  QE by its nature is a giant swap, inserting cash (reserves) into the economic system, and removing non-cash assets (government bonds, mortgages, and sometimes even corporate bonds and ETFs). When the supply of cash goes up and the supply of non-cash assets goes down, the aggregate price of non-cash assets needs to go up to restore equilibrium to the global allocation between cash and non-cash assets.

In the Three Phases Model, QT runs this process in reverse, at least at first. QT removes cash (reserve destruction) and increases the supply of non-cash assets as bonds are allowed to mature or are sold from the central banks’ balance sheets. So, initially, asset price inflation runs in reverse. That means lower stocks, wider credit spreads, higher interest rates, higher volatility, and a stronger currency. In other words, all five components of financial conditions tighten at exactly the same time, and this period is exceptionally painful in markets because government bond yields rise at the same time as generalized risk-off occurs in other markets.  Everything goes down in price together, so core fixed income provides no diversification to a risk portfolio. Duration is not helpful, and in fact is actively harmful to a “diversified” portfolio. We call that “wrong-way correlation” and it’s a hallmark of Phase 1 (risk-off with higher yields).

In Phase 2, risk-off continues, but importantly government bond yields decline. This phase, as we visualize it, is caused by the market’s acknowledgement that financial conditions matter for economic performance, and that central banks may overshoot. Financial conditions indices measure the generic cost of raising capital.  The tighter financial conditions are, the more expensive raising capital is, regardless of the form that capital might take: debt, equity, callable, non-callable, domestic, or foreign. If capital becomes more expensive, economic output slows down.  The labor market cools.  Can you think of any companies whose stock prices went down recently and a round of layoffs ensued? What about private companies whose access to pre-IPO financing was curtailed and layoffs ensued? Financial conditions matter.

So in Phase 2, more risk-off, but this time in “right-way correlation” where once again government bonds are an effective diversifier for risk assets. Markets assume or actively observe that tighter financial conditions are biting the real economy, and project that eventually a dovish course correction will be necessary from the central banks to avoid recession.

Phase 3 occurs after the dovish course correction. Risk markets rally back, and bond yields rise from low levels again in traditional right-way correlation. It may seem counter-intuitive to have rising bond yields after a dovish course correction from central banks, but the starting point for yields will reflect rising recession risks from overly tight financial conditions and a respite from those conditions will both reduce near-term recession risks as well as raise the terminal rate that an ultimate policy tightening pathway can achieve. 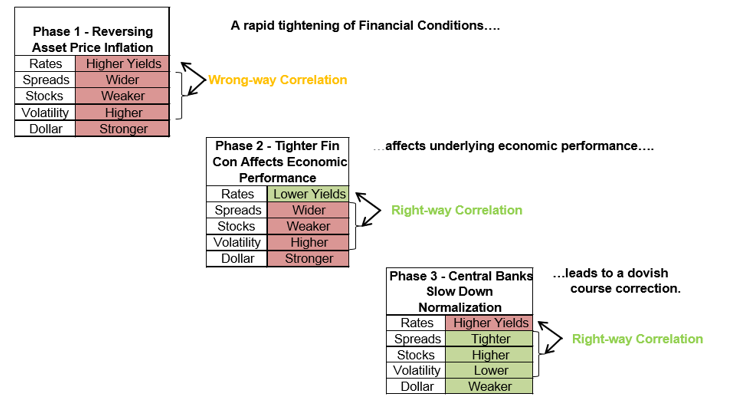 Source: JPMAM. For illustrative purposes only.

The Three Phases Model is imperfect.  It evolved back in 2018, for example we didn’t initially understand that the Phases could go in cycles rather than just 1-2-3-done, and indeed markets went through two or more complete cycles of the phases as QT was digested.  In the current iteration, the timing and magnitude of the Phases have been significantly affected by the reverse repo facility (“RRP”) at the Fed.  The monetary plumbing is frustratingly complex, but we feel it is important and will attempt to explain the view. While preparing our portfolios for Phase 1 price action (ideally, underweight risk and significantly underweight duration), we expected to see Phase 1 market dynamics (risk-off with higher yields) right around now, i.e. at the start of QT. But of course, the current wrong-way correlation risk-off regime has prevailed since December 2021, and was intensified during the month of April.  The reality is that cash is already being destroyed. Notwithstanding the fact that QE continued until March, reserves have been declining since December 2021, and that decline accelerated in April (Chart 1).  In April alone, reserves declined by nearly $450bn – a big number in the context of QT’s target pace of $95bn per month.  So far, there are $960bn fewer reserves in the system compared to December. The reason for the decline was twofold: 1) The debt ceiling was raised in December and then tax payments in the month of April exceeded the federal government’s expectations, both of which resulted in the Treasury General Account (“TGA”) swelling to nearly $1 trillion, money that comes out of circulation until it is spent by the government, and 2) money market funds have continued to increase their usage of the Fed’s reverse repo facility, which also removed money from circulation.

While the rise in the TGA was significant, it was a one-off phenomenon and for purposes of forward-looking analysis of QT and markets, the RRP growth is more important because it is more likely to continue. I have long argued that the RRP actually represented a risk-positive or helpful element of the Fed’s broad desire to reduce its balance sheet size. In theory, the RRP represents a stock of “shadow QE,” which could be used to offset the destruction of the monetary base while QT happened.  In essence, approximately $4.5 trillion of QE occurred during the COVID crisis, but the monetary base only went up by about $2.5 trillion, because the remaining $2 trillion of reserve creation was sterilized by the RRP (and at times, the TGA). So, in theory this could run in reverse, with the RRP draining during QT helping to blunt the reserve destruction while the aggregate balance sheet size still declined.  With hindsight this may have been wishful thinking and the RRP is more likely to grow than shrink. Once the Fed began hiking policy rates in March, they hiked the RRP rate by the full 25 basis points, rather than just 20 basis points to put the RRP rate back at the bottom of the Fed Funds corridor (i.e., between the March and May Fed meetings, the RRP rate sat at 30 basis points, not 25, and now it’s at 80 basis points following the 50 bps hike in May). That extra 5 basis points is probably semantics, but it signals that the Fed currently has no desire to slow down RRP and/or money market fund growth. Bank deposit interest rates are notoriously slow to adjust to rising overnight Fed policy rates, but money market fund rates adjust more quickly especially for large institutional-sized money fund shareclasses. Therefore, with each successive rate hike, there is an increasing interest rate incentive for deposits to flow (further) out of the banking system into money market funds. And then, money market funds park that cash in the RRP earning 80 bps, thereby removing it from circulation. It is a reserve destruction.

In the context of the Three Phases Model, there are a few implications:

Positioning implications: stay underweight risk until the data gets wobbly, but begin to add back high quality duration in anticipation of Phase 2 price action.

Back to the Transitory Future

What if inflation was transitory all along? Exploring the growing case that the Fed has made sufficient progress and tightened enough.

Night of the Living Fed

The Fed’s view that inflation would be transitory has turned into a horror movie. We flag several risks that suggest the Fed might now be making more progress than it thinks.