The importance of profit growth in a rising rate environment

US equities have come under pressure this year from a cocktail of concerns, including elevated inflation, rising interest rates, slower growth and geopolitical tensions.

A useful way to illustrate how severe the fall in US equities has been is by looking at the forward price-to-earnings (P/E) ratio of the S&P 500 Index. The forward P/E ratio measures the price of the index divided by estimated earnings-per-share of its constituents for the next 12 months. This multiple provides a meaningful comparison against historical market movements and is a useful way to break down the different drivers of return: price and earnings.

Exhibit 1: Equity volatility has been driven by a re-rating in valuations 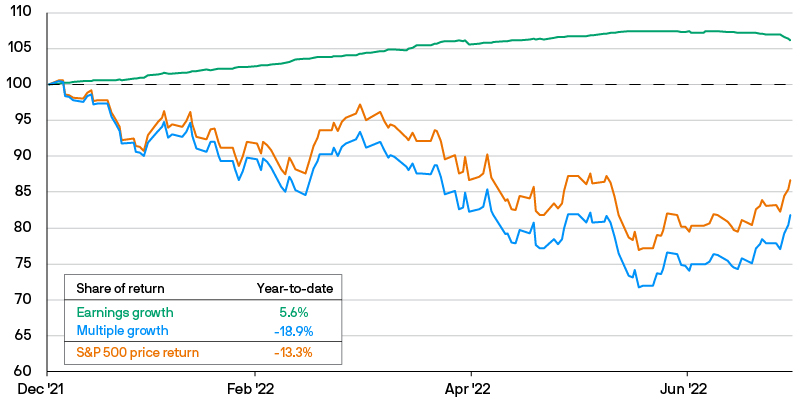 Source: Compustat, FactSet, Standard & Poor’s, J.P. Morgan Asset Management. Earnings estimates are based on estimates from Standard & Poor’s and FactSet Market Aggregates. Earnings and multiple growth are both year-to-date percent changes of next twelve-month estimates. Past performance is not indicative of future returns. Data as of 31 July 2022.

With the US Federal Reserve set to continue raising interest rates over the coming months, equity market volatility will likely persist and P/E valuations will likely remain under pressure. This means company earnings are likely to be the main driver of returns for investors. Although earnings for the second quarter of 2022 were better than expected, the outlook for profits rests on the ability of companies to defend profit margins.

Rising inflation has put pressure on profit margins. To be able to defend these margins, we think there are three levers that companies can pull – reduce costs, pass costs along in the form of higher prices, or focus on automation and efficiency. In the current environment, businesses seem inclined to pull all three. We have heard about hiring freezes and layoffs in sectors such as technology, whereas costs are likely to be passed on in the industrial, energy, materials and consumer staples sectors.

Across the board we expect a greater focus on productivity improvements, which could potentially be supported by some further investment into efficiency by companies. Exhibit 2 shows how margins have started to decline from their 2021 highs, but we don’t expect a collapse similar to previous recessions. We expect margins to stabilise in the mid-12% range barring a more significant downturn in the economy.

Exhibit 2: Margins will decline from all-time highs, but seem unlikely to collapse 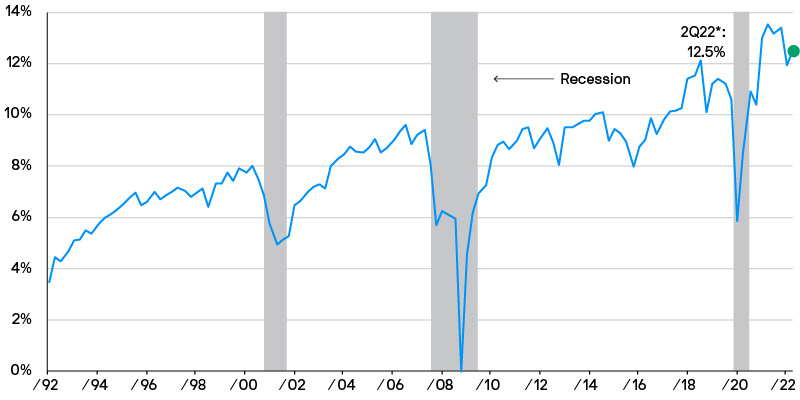 Source: Compustat, FactSet, Standard & Poor’s, J.P. Morgan Asset Management. Past performance is not indicative of future returns. *S&P 500 2Q22 profit margins estimated is based on current operating earnings and sales per share estimates from Standard & Poor’s. Data as of 31 July 2022.

In our opinion, the sell off in US equities has created opportunities to invest in select areas of the market at attractive prices. Value-style companies – which tend to trade at lower P/E ratios during normal markets – are looking even cheaper and, given how far prices have fallen, we think valuations should be less sensitive to any further rate increases. Growth companies – which are categorised by their relatively high P/E ratios and strong expected earnings growth – are now trading at more attractive levels and we think investors are likely to increase exposure to those growth companies which are currently profitable.

Overall, we are inclined to focus on companies with large market capitalisations and those sectors and industries that are able to continue growing profits against a backdrop of slowing economic growth, elevated inflation and rising interest rates.

Whether you’re looking for a monthly all-round update from our insights team, or timely updates on our individual trusts.

Drawing on the depth and breadth of their market and economic expertise, our global macro strategists offer insight into today's big investment themes to enable more confident portfolio decisions.

Helping you take the long view on your investments

Discover how investment trusts can help you reach your long-term savings goals and manage the risks that are part and parcel of any market-based investment.

This is a marketing communication and as such the views contained herein do not form part of an offer, nor are they to be taken as advice or a recommendation, to buy or sell any investment or interest thereto. Reliance upon information in this material is at the sole discretion of the reader. Any research in this document has been obtained and may have been acted upon by J.P. Morgan Asset Management for its own purpose. The results of such research are being made available as additional information and do not necessarily reflect the views of J.P. Morgan Asset Management. Any forecasts, figures, opinions, statements of financial market trends or investment techniques and strategies expressed are unless otherwise stated, J.P. Morgan Asset Management’s own at the date of this document. They are considered to be reliable at the time of writing, may not necessarily be all inclusive and are not guaranteed as to accuracy. They may be subject to change without reference or notification to you. It should be noted that the value of investments and the income from them may fluctuate in accordance with market conditions and taxation agreements and investors may not get back the full amount invested. Changes in exchange rates may have an adverse effect on the value, price or income of the products or underlying overseas investments. Past performance and yield are not reliable indicators of current and future results. There is no guarantee that any forecast made will come to pass. Furthermore, whilst it is the intention to achieve the investment objective of the investment products, there can be no assurance that those objectives will be met.

J.P. Morgan Asset Management is the brand name for the asset management business of JPMorgan Chase & Co. and its affiliates worldwide. To the extent permitted by applicable law, we may record telephone calls and monitor electronic communications to comply with our legal and regulatory obligations and internal policies. Personal data will be collected, stored and processed by J.P. Morgan Asset Management in accordance with our EMEA Privacy Policy www.jpmorgan.com/emea-privacy-policy. Investment is subject to documentation. The Annual Reports and Financial Statements, AIFMD art. 23 Investor Disclosure Document and PRIIPs Key Information Document can be obtained free of charge from JPMorgan Funds Limited or www.jpmam.co.uk/investmenttrust.

This communication is issued by JPMorgan Asset Management (UK) Limited, which is authorised and regulated in the UK by the Financial Conduct Authority. Registered in England No: 01161446. Registered address: 25 Bank Street, Canary Wharf, London E14 5JP.