A number of events have coincided with the volatility seen in sterling markets:

In our view, the combination of all these individual events created uncertainty in markets about the UK’s institutional architecture, and the central bank and government’s commitment to sustainable monetary and fiscal policy.

Sterling has seen the largest of the moves. The pound has fallen 8% against the dollar since the start of September, however this has been in an environment of broad dollar strength. Perhaps a more accurate characterisation of individual sterling risk premia is to consider the fall against the euro, amounting to around 3.5%.

Gilt prices fell substantially as markets digested the impact of the fiscal package on UK monetary policy and the changing outlook for demand and supply of UK Gilts. The new packages suggest that net borrowing this fiscal year will amount to around £190bn. Although this is less than the £300bn in fiscal year 2020/21 at the peak of the Covid pandemic, the backdrop for Gilt demand has now changed. In 2020 the Bank of England was a net buyer of Gilts amounting to around £270bn. The Bank had previously announced that over the next 12 months it would be a net seller of Gilts to the tune of £80bn. However, as conditions became disorderly the Bank announced that it was postponing its plans to sell and instead embarked on a new temporary Gilt purchase programme. This served to effectively backstop the market, although the 10-year Gilt yield still stands at over 4%, up from around 1% at the start of the year. This apparent easing of policy at a time of monetary tightening was explained by the need to meet the financial stability component of the Bank’s mandate.

In contrast, the FTSE 100 has been relatively resilient. Roughly 80% of the earnings generated by FTSE 100 companies are made overseas and therefore become more valuable when sterling declines. However, the FTSE 250 generates 40% of its earnings domestically and has seen a decline of 9% month-to-date.

The focus remains on the Bank of England, which next meets on 3 November. Against a backdrop of declining sterling, the Bank released a statement on 26 September stating that “it will make a full assessment at its next scheduled meeting of the impact on demand and inflation from the Government’s announcements, and the fall in sterling, and act accordingly”. This dampened expectations that were building in the market of an interim policy announcement.

The Bank finds itself in a difficult position. Although the government has made clear that many of its initiatives aim to boost the supply of the economy, in the near-term at least they will merely add to demand at a time when the UK appears to be running at full capacity and inflation is already uncomfortably elevated and persistent. The decline in sterling will also feed imported and domestic inflation. The Bank of England has little choice but to meet fiscal loosening with monetary tightening.

Without the ability to tighten policy with asset sales, efforts will now focus on increasing short-term interest rates. At the time of writing, the market expects the Bank will need to raise interest rates by 1.25 percentage points (pp) in November. The following meeting in December is expected to see another 1.00pp increase, taking rates to 4.5% by the end of the year.

Market expectations for Bank of England base rate % 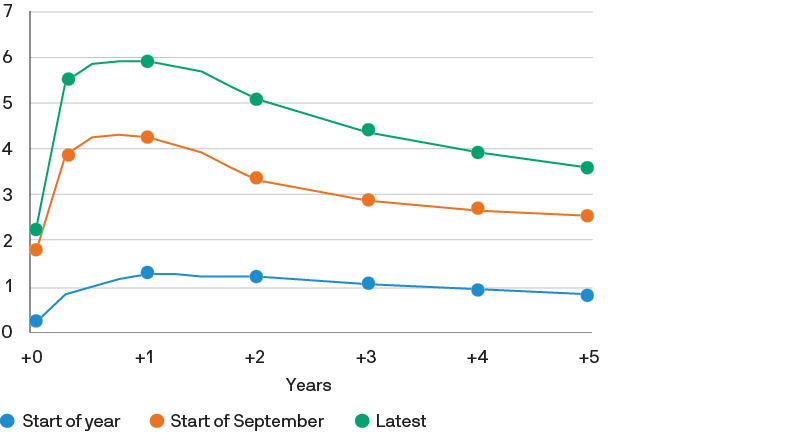 Source: Bloomberg. J.P. Morgan Asset Management. Expectations are calculated using 6-month OIS forwards. Past performance is not a reliable indicator of current and future results. Data as of 26 September 2022.

This will clearly have a dampening effect on economic activity. UK mortgage rates on a typical 2-year fix had already more than doubled in the first eight months of the year, hitting 3.6% in August. UK interest rate swaps – a key determinant of mortgage rates – have surged further in September. For many UK homeowners, the feedthrough from higher interest rates will not be instant given that only 20% of households are currently on floating rate mortgages. That said, for the 35% of mortgage holders with a fixed rate mortgage for only 2 years, refinancing will be a painful process. If mortgage rates hit 6% next year as markets are currently pricing, the average household would be paying over £1,400 a month for a 75% loan to value, 2-year fixed mortgage. This compares to an average payment of less than £900 on equivalent terms in the first half of 2021.

The problem for the Bank is that failure to act with sufficient force risks undermining its commitment to inflation, a further decline in the currency, further imported inflationary pressures and a need to act with even greater hikes further down the line.

S&P (AA stable) and Moody’s (Aa3 stable) rating reviews are due on 21 October and rating downgrades are possible. Although markets often move well ahead of official ratings announcements, sometimes changes can push a bond beyond a threshold forcing investors to sell for regulatory purposes. For example, downgrades to A+ would remove Gilts from the investible universe for some central bank type mandates, and foreign investors hold 30% of the Gilt market.

Several data releases may also be important. UK inflation data for September is released on 19 October; another upside surprise would only strengthen calls for the Bank of England to tighten even more aggressively. Monthly GDP for August is also due in mid-October. If this suggests UK activity is slowing sharply, it will add to concerns about the government’s cash flows.

These are not easy times for policymakers in any region. They face an uncomfortable balancing act of trying to support demand and maintain popularity amongst their electorate, yet without stoking further inflation and losing credibility over the long-term sustainability of their plans.

Words and actions will be heavily scrutinised over the coming days and weeks as markets assess whether policymakers in the UK are getting that balance right.

Our core judgment is that the market volatility witnessed will ensure that policymakers provide sufficient assurance about medium-term plans to anchor credibility, and as such we have seen the worst of the market moves.