ECB reduces the rate hike but increases the rhetoric

A smaller hike with a hawkish message

At its last monetary policy meeting of 2022, the ECB increased all key interest rates by 50 bps, bringing the refinancing rate to 2.50%, the marginal lending facility to 2.75% and the deposit facility rate to 2.00%. This rate hike was a step down from the 75-bps increases of the previous two meetings. Paradoxically, the message that accompanied this downshift was surprisingly hawkish; at the press conference, President Lagarde stated that the ECB “need to do more on rates than the markets price”, and that it was “obvious to expect more 50-bps hikes”. Despite language in the press release suggesting that monetary policy decisions will continue to be data dependent and taken meeting to meeting, these comments seemed like a return to forward guidance.

The rationale for this forceful tone is that inflation “remains far too high and is projected to stay above the target for too long”. While headline inflation fell to 10% year on year (yoy) in November from 10.6% yoy in October, this was principally a function of energy costs. The ECB is clearly concerned that underlying inflation has strengthened and become more persistent, evidenced by core inflation remaining at 5% yoy in November (Exhibit 1).

Exhibit 1: November headline inflation came off its peak but core inflation is unchanged at a record high of 5% 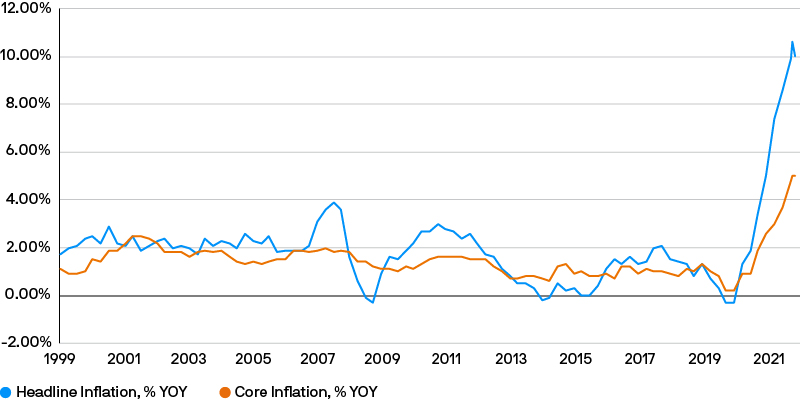 This central bank meeting also provided the latest staff projections for growth and inflation. The growth forecast for 2023 was revised down to 0.5%, while the longer-dated projections predict a recession that will be “relatively short lived and shallow”, with growth forecast to recover to 1.9% and 1.8% in 2024 and 2025, respectively. The ECB’s inflation forecasts grabbed the headlines, particularly the projection for 2025 that sees core inflation still above the ECB target level at an uncomfortably high 2.4% yoy – a key propellent of the bank’s more hawkish stance.

In line with expectations, the ECB also announced the start of QT. The central bank will slowly reduce the Asset Purchase Programme (APP) holdings by an average of EUR 15 billion per month until the end of the second quarter 2023, with the subsequent pace to be determined.

Combined with the previously announced changes to the terms of the ECB’s Targeted Longer-Term Refinancing Operations in October – which has motivated banks to repay funding – systemwide liquidity has started to decline.

The fact that each of these policy adjustments contributes towards tighter monetary policy probably helped tip the argument in favour of today’s smaller rate increase.

The latest monetary policy action by the ECB has increased the deposit rate to its highest level in more than a decade (Exhibit 2). With money market rates still closely aligned to the deposit rate, euro cash investors will benefit from a significant increase in net yields.

Exhibit 2: The ECB deposit rate is at the highest level in more than a decade

In anticipation of further ECB rate hikes, the money market curve has increased significantly in recent months and remained relatively steep (Exhibit 3a & 3b), creating good opportunities to add incremental yield. J.P. Morgan’s Euro Liquidity strategies are well positioned for the additional ECB tightening cycle, having maintained a relatively low weighted average maturity (WAM) with investments concentrated in shorter tenor securities. Money market fund yields will move higher in the coming days as they benefit from higher deposit rates and steeper yield curves, albeit with a few weeks lag for reinvestment to catch up fully.

While policy rates are likely to remain on an upward trajectory in the first half of next year, the slower pace of hikes and ultimately the approach towards a peak rate will give us more confidence to add some risk back in to portfolios. However, while uncertainty remains regarding the path for inflation and the extent of the oncoming economic downturn, European interest rates will likely remain volatile. We believe euro investors should continue to take a cautious approach to cash management, ensuring sufficient diversification and laddering to optimise the balance of risk and return.

Source for all data is the ECB and data is as 16 December 2022, unless otherwise stated.