Is the pandemic changing the long-term outlook for Social Security?

Due to pandemic-related unemployment, funding from payroll taxes is down, but this is expected to be temporary, so it shouldn’t set back the program significantly.

The pandemic caused a host of economic issues. We may add hastening of the depletion of the Social Security Old Age, Survivor and Disability Insurance (OASDI) trust fund to the list, but we should be careful to not overstate the damage. Rather, it might be considered an unexpected pothole on a road that will require significant construction in the form of payroll tax increases and benefit reductions in approximately a decade. The trustees estimate this construction timeline is only pushed up about one year to 2034 due to the economic shock from COVID-19. The primary reason for the pothole and needed road work? The high degree of dependence on current workers for funding:

The decline in payroll taxes due to lower employment levels isn’t the only factor that impacted the near-term projections. The trustees also cited:

Looking past 2023, the trustees do not expect a smooth road and this is consistent with their view in prior years. Even if the trust fund is completely depleted – something Congress has never allowed to happen - they still project enough in payroll taxes to pay the majority of benefits. Although they admit uncertainty, their projection is there will be enough in payroll taxes coming in to pay 78% of scheduled benefits through 2034 and 74% by the end of the projection period in 2095.

In prior years, the trustees incorporated the likelihood of possible periodic negative events and the aging population into their assumptions. This means that while the projection slightly worsened in 2021, it does not change the long-term outlook or materially hasten the need for Congress to act in the coming years to shore up the program. Historically, Congress has waited until trust fund depletion was imminent to act. Enacting changes sooner would allow for more options, more gradual phase-in of changes and more notice. While we are not optimistic about Congress acting in advance, we believe current beneficiaries will be shielded as much as possible for one simple reason - there are a lot of older people, and older people tend to vote. 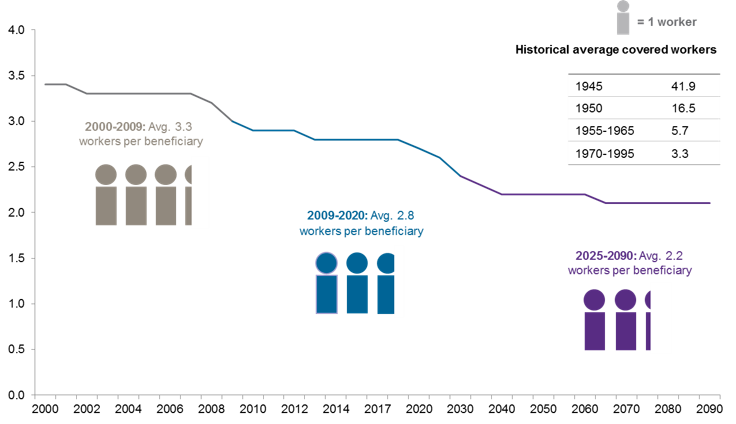 This guide provides a powerful framework to support advisor's retirement planning conversations with clients by using data, exhibits and analysis to explain complex retirement issues in a clear and concise manner.