Back in 2013, the US Federal Reserve (the Fed) created a bout of market volatility in what became known as the “taper tantrum”. The question now is whether markets are in for a similarly rough ride as asset purchases cease in 2022.

Our central expectation is that markets will avoid another taper tantrum. On aggregate, we expect global stocks to be resilient for three reasons:

Exhibit 7: The 2013 ‘taper tantrum’ was mostly disruptive for EM

S&P 500 vs. MSCI EM performance and US 10-year Treasury yield around the previous Fed taper

If we’re right, and bond yields drift higher gradually rather than experiencing a rapid spike, and if earnings growth remains strong, then rising yields shouldn’t be a problem.

That’s not to say there aren’t any areas of concern. The key difference between today and the last time the Fed tapered is that valuations for some stocks are much higher now than they were back then. The forward price-to-earnings (P/E) ratio for the S&P 500 was 14x in the middle of 2013, compared with over 20x now.

Extremely elevated valuations are concentrated in some growth segments of the market, which may be more vulnerable to rising rates, particularly if bond yields were to rise more quickly or more sharply than we anticipate. Growth stocks have had a “good pandemic”, in that the nature of the recession was good for their earnings. Technology companies, for example, benefited from all the home office equipment being purchased and the rapid adoption of cloud computing. But valuation uplift has also played a key role in their spectacular returns, and zero rates has undoubtedly been part of this valuation uplift. Therefore, some stocks and sectors do look more vulnerable to the risk of a more rapid repricing of bond yields, as we saw in the first quarter of 2021, when US 10-year Treasury yields rose from 0.9% to 1.75% (Exhibit 8).

Exhibit 8: A spike in bond yields may challenge growth stocks, but benefit others 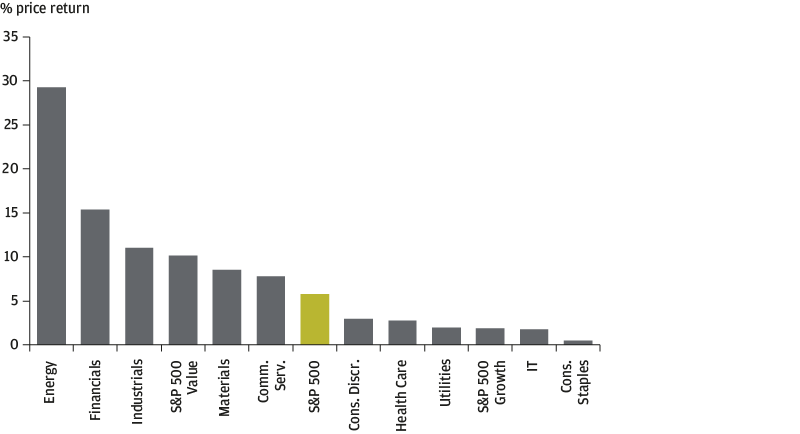