Review of markets over the fourth quarter of 2021

In the fourth quarter, developed market equities continued to rally, providing investors with the third calendar year in a row of strong positive returns. Strong earnings growth drove equities higher. Fixed income performance over the quarter was flattish, as markets had to digest rising inflation and less easy policy from central banks.

The emergence of the highly infectious Omicron variant led to a spike in equity market volatility at the end of November, but markets quickly recovered as data from South Africa and the UK indicated a lower risk of severe disease. Current corporate strength and the prospect of further potential earnings growth in 2022 outweighed the risk factors over the quarter, despite the fact that hospitalisations rose towards the end of the year in several countries. 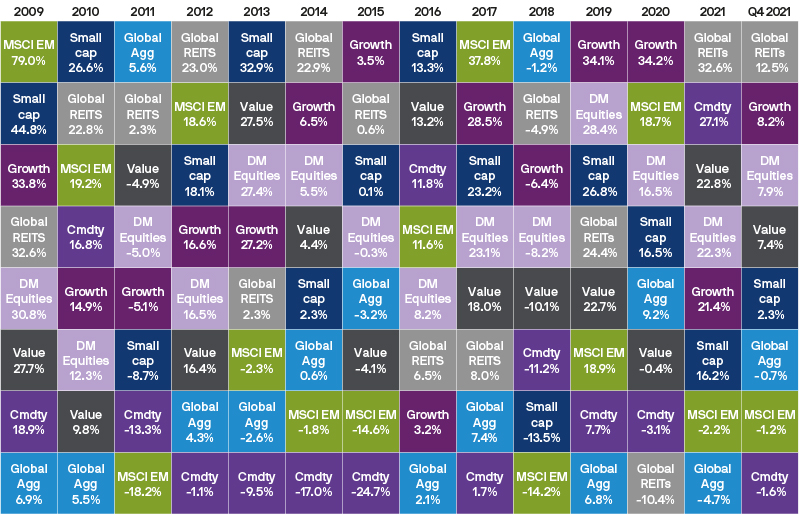 But the fear of a weaker future growth backdrop, partly due to projected central bank policy normalisation, led to a flattening of the US yield curve. Small caps also underperformed large caps over the quarter as uncertainties about future growth weighed on their performance. 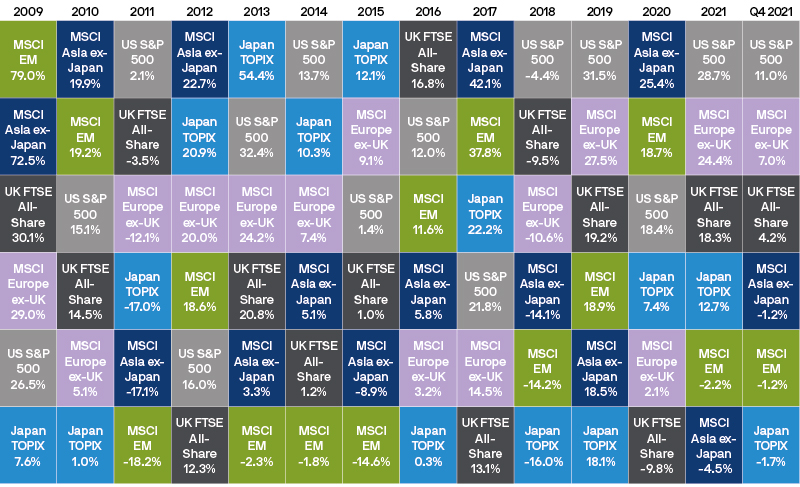 Source: FTSE, MSCI, Refinitiv Datastream, Standard & Poor’s, TOPIX, J.P. Morgan Asset Management. All indices are total return in local currency, except for MSCI Asia ex-Japan and MSCI EM, which are in US dollars. Past performance is not a reliable indicator of current and future results. Data as of 31 December 2021.

In Q4, the rapid increase in infections due to seasonality and the new Omicron variant began to take its toll on global growth. The recent fall in December flash services purchasing managers’ indices (PMIs) in the US, the eurozone and the UK is a clear indication that the service sector is losing some of its positive momentum. However, global manufacturing sentiment is relatively resilient despite supply constraints and rising input prices. December flash manufacturing PMIs in the US (57.8), the eurozone (58.0) and the UK (57.6) indicate a still healthy expansion in this sector of the economy. This bodes well for corporate earnings, which are more closely linked to manufacturing than services.

In the US, President Biden signed the Infrastructure Investment and Jobs Act, a long awaited $1.2 trillion bipartisan infrastructure bill. The bill includes $550 billion of additional spending, 49% of which will be allocated to upgrading America’s transportation sector, including ports, airports, railroads, roads, bridges and public transport, and 32% will be used to improve water and power infrastructure. The remainder will be spent on broadband (12%) and the environment (7%). The ambitious Build Back Better spending bill ($1.7 trillion) didn’t muster a majority in the Senate in December. However, private sector fundamentals look solid enough to carry US growth next year. Strong performance of financial assets and real estate have pushed the ratio of US household liabilities to assets to its lowest reading since 1973. This, along with still elevated savings, gives the consumer significant firepower in the coming years.

In Europe, an unreliable supply of Russian gas, falling investments in thermal energy and maintenance work on nuclear power plants led to a sharp rise in gas and electricity prices across the continent before falling towards the end of the quarter. Higher energy prices are adding to the rise in inflation in the region.

Inflation is also an issue outside of Europe. In December, three of the four major developed market central banks indicated that they have greater concerns about inflation heading into 2022 than about the economic disruption that could be caused by the Omicron variant. Government bond markets were mixed over the quarter. The short end of the curve moved higher in the US and the UK as markets priced in a faster pace of rate hikes. 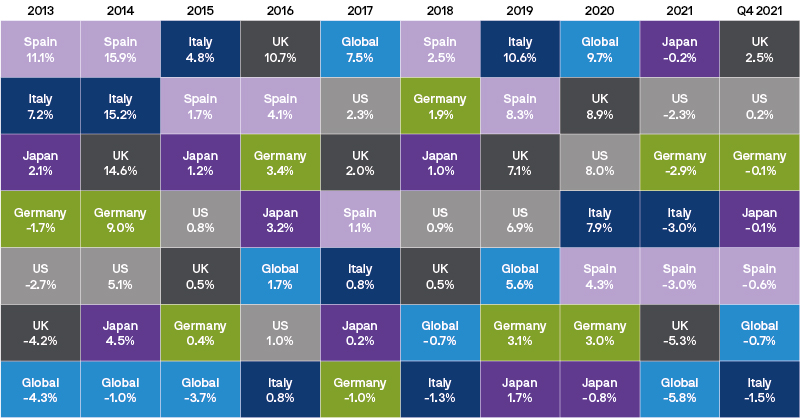 In November, the US Consumer Price Index (CPI) jumped to 6.8% year-over-year, its highest reading in 39 years, and the unemployment rate fell to 4.2%. The rapidly tightening labour market and persistent inflationary pressures pushed the Federal Reserve to adopt a more hawkish stance. While the Federal Open Market Committee (FOMC) voted to maintain the current federal funds target rate at a range of 0.00% – 0.25%, it announced plans to accelerate the tapering of asset purchases from $15 billion to $30 billion per month, beginning in January. This suggests the FOMC will conclude tapering by March 2022, paving the way for additional rate hikes next year, with the median member now forecasting three hikes in 2022.

In the UK, CPI rose to 5.1% year-over-year and the unemployment rate dropped to 4.2%. A new record in job vacancies of 1.2 million is a clear indication of increasing labour market tightness that could cause further wage increases, potentially fuelling further price increases. The Bank of England reacted by raising interest rates by 0.15% to 0.25%, despite the rapid spread of Omicron. The European Central Bank (ECB) confirmed that the pandemic emergency purchase programme (PEPP) would end in March, reducing purchases to roughly €40 billion per month via the asset purchase programme in 2Q 2022, €30 billion per month in 3Q 2022 and then €20 billion per month until shortly before the first rate rise. Waning central bank support and persistent inflation pressure continue to be headwinds for fixed income markets going into next year. But credit, particularly high yield, should be supported by strong corporate balance sheets and earnings. 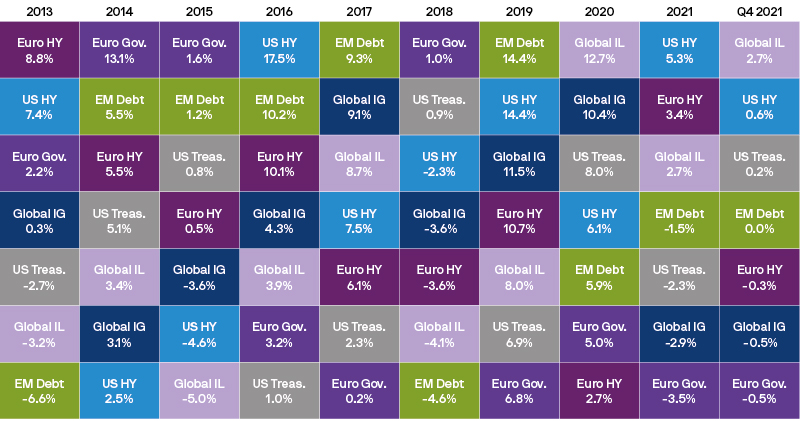 With regards to monetary policy, China is heading the opposite way. The People’s Bank of China (PBOC) showed more easing bias in its operations, while staying cautious on the aggregate level of leverage in the economy. In early December, after cutting the reserve requirement ratio (RRR) by 50 basis points (bps), the PBOC lowered the re-lending rate by 25 bps to support agricultural and small enterprises. In 2022, there may be more cuts to the RRR and the short-term loan prime rate (LPR) to reduce lending costs. The easing bias of the PBOC reflects the growing concerns of Chinese policymakers about downside risks to the economy. Supportive fiscal and monetary policy, which have been recently reintroduced, might continue at a larger scale in 2022. This also suggests more patience on behalf of policymakers regarding long-term structural reforms.

In 2021, Chinese equities significantly underperformed global equities contributing to the 25% underperformance of emerging market equities vs. developed markets. More supportive fiscal and monetary policy and a less restrictive regulatory environment should provide a better backdrop for the region in 2022. However, a less lavish supply of US dollars and the prospect of higher US rates could continue to be a headwind for some emerging markets, at least in the near term. The long-term growth and investment outlook for emerging markets still looks compelling, particularly after the sharp price-toearnings (P/E) ratio contraction of the past year.

Due to the spread of Omicron, the first quarter of 2022 could be challenging for the global economy. Continued pandemic-related restrictions could coincide with disappointing economic data. So far, the market has largely been willing to look through the near-term risks but any further disappointment on the virus front could lead to increased market volatility.

Investors will have to stay broadly diversified to make sure their portfolios are generating the returns they need. However, over the next 12 months, if the hit from Omicron is short-lived, the prospect of another year with above trend GDP growth and rising corporate earnings probably still justifies an overweight to equity risk in portfolios. But, Omicron, structural inflation threats and normalising fiscal and monetary policy are risks to watch. 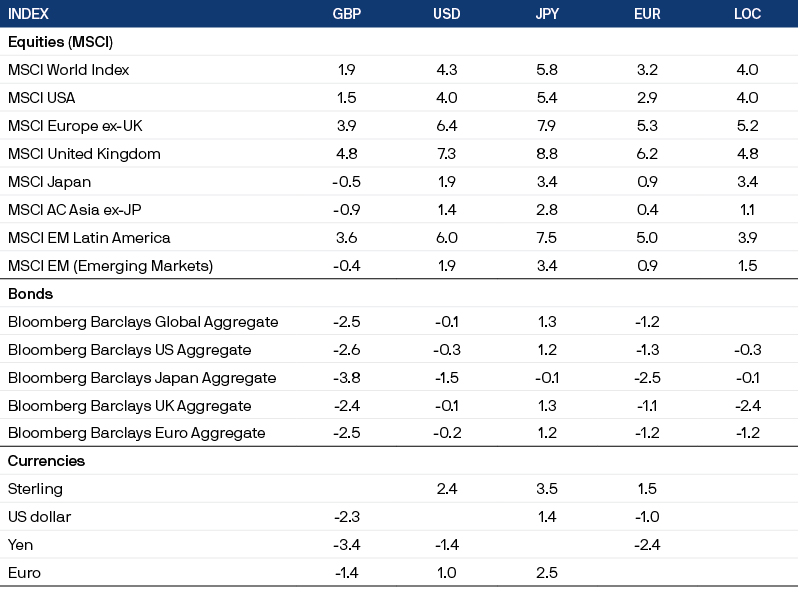 Source: Bloomberg Barclays, MSCI, Refinitiv Datastream, J.P. Morgan Asset Management. Past performance is not a reliable indicator of current and future results. Data as of 31 December 2021.