Review of markets over April 2022

The first quarter of the year was difficult for investors and April proved no different. The war in Ukraine, lockdowns in China and the prospect of substantially tighter US monetary policy all weighed on sentiment.

Global equities continued their recent decline, with MSCI All Country World falling by -8.0% over the month. The commodity-heavy FTSE All-Share was a relative bright spot, returning 0.3% in April. Conversely growth stocks saw substantial losses of -11.9%.

Fixed income also came under pressure, with global bonds delivering -5.5% in April as US 10-year Treasury yields approached 3%. Expectations for the path of monetary policy have seen a major shift this year, with markets now pricing in interest rates of well over 2% in both the US and the UK by year-end, while eurozone rates are expected to move into positive territory as early as October. 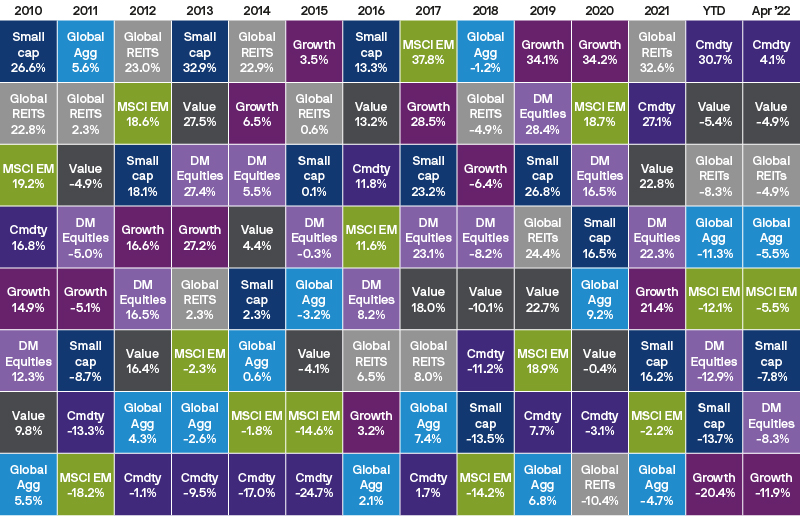 April concluded with no sign of a resolution to the war in Ukraine, as fighting in the eastern and southern parts of the country intensified. The impact on energy markets remains particularly notable given the difficulties faced by Europe in reducing its energy dependency on Russia. European gas prices cooled a little on the month but still stand 42% higher year-to-date. The recent increase in oil prices paused due to both the release of strategic oil reserves and also expectations of lower demand from China.

The impact of the conflict is now starting to become clearer in economic data. Labour markets continue to be the bright spot, with unemployment rates across both the UK and euro area sitting close to multi-decade lows. Yet despite strong wage growth, consumer confidence in both the eurozone and the UK has tumbled to levels consistent with a recession. April’s flash purchasing managers’ indices (PMIs) were a little more positive in the eurozone, with the composite index rising to 55.8 despite a sharp fall in German manufacturing. UK data was weaker, with retail sales declining by 1.4% month-over-month in March and flash PMIs falling by more than anticipated. A relatively strong 3.7% start to the year for the FTSE 100 highlights the disconnect between the UK economy and UK large cap stocks in an environment where the energy and materials sectors are performing strongly.

Meanwhile, Emmanuel Macron was re-elected for a second five-year term as French president, defeating Marine Le Pen in a repeat of the 2017 run-off. While the margin of victory was narrower than five years ago, the result had little bearing on financial markets given that it was largely as predicted by polls. 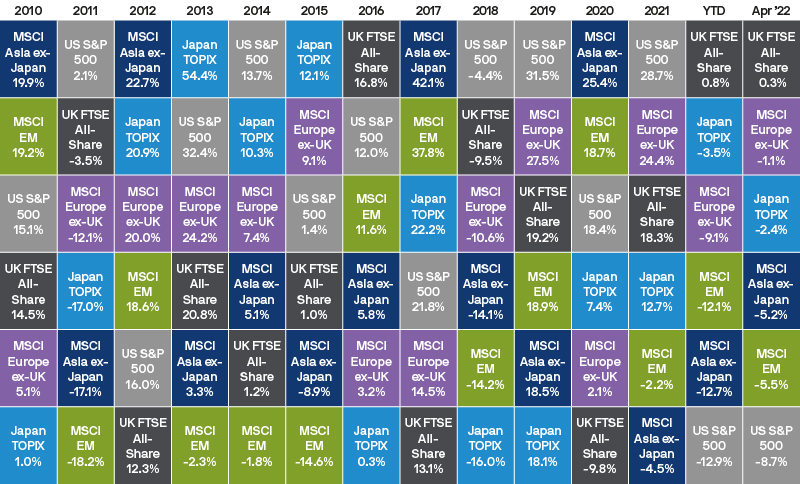 Source: FTSE, MSCI, Refinitiv Datastream, Standard & Poor’s, TOPIX, J.P. Morgan Asset Management. All indices are total return in local currency, except for MSCI Asia ex-Japan and MSCI EM, which are in US dollars. Past performance is not a reliable indicator of current and future results. Data as of 30 April 2022.

Having kept Covid-19 under tight control for most of the past two years, Chinese authorities are now struggling to contain a major outbreak. Shanghai spent all of April in full lockdown, and market sentiment was dented further towards the end of the month when reports emerged of new containment measures being implemented in Beijing. Monetary and fiscal policy has provided some offset, but China’s 5.5% growth target for 2022 is now looking difficult to achieve while policymakers prioritise the zero-Covid strategy over economic activity. Stock markets came under further pressure, with the MSCI China index declining by -4.1% in April. Valuations on Chinese stocks relative to developed markets now stand at levels last seen in 2015, while Chinese 10-year yields have moved below US 10-year Treasury yields for the first time in over a decade. 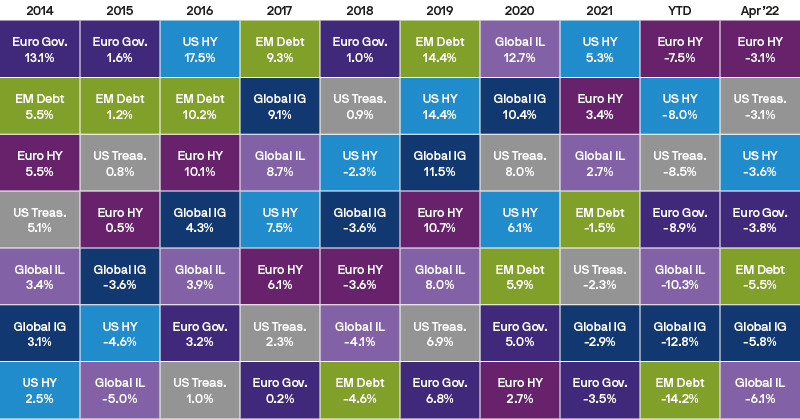 After several months of talking the talk, there are now signs that the Federal Reserve (Fed) is preparing to walk the walk on tackling inflation. With US headline inflation standing at 8.5% – the highest level since 1981 – several members of the Fed’s Board of Governors used speeches in April to highlight their desire to take rates back to neutral as quickly as possible. The market has now priced 50 basis point hikes at each of the Fed’s next three meetings, a path that Fed Chair Jerome Powell hinted was perfectly feasible during a panel discussion at the International Monetary Fund. Bond markets reacted sharply to Powell’s more hawkish tone. US 2-year and 10-year yields rose by 39 basis points (bps) and 56 bps respectively in April, with global government bond yields rising in tandem. Credit spreads also widened over the course of the month.

Rising US yields continue to support the US dollar, with the greenback now up 7.3% on a trade-weighted basis year-to-date. Dollar strength has been especially notable relative to the Japanese yen. The Bank of Japan (BoJ) is coming under increasing pressure to move away from its current yield curve control targets, with the yen down -11.1% versus the dollar year-to- date. No changes were made at the BoJ’s April meeting, but its actions will be important to monitor in the coming months given the potential impact on global bond yields if Japanese yields move higher. 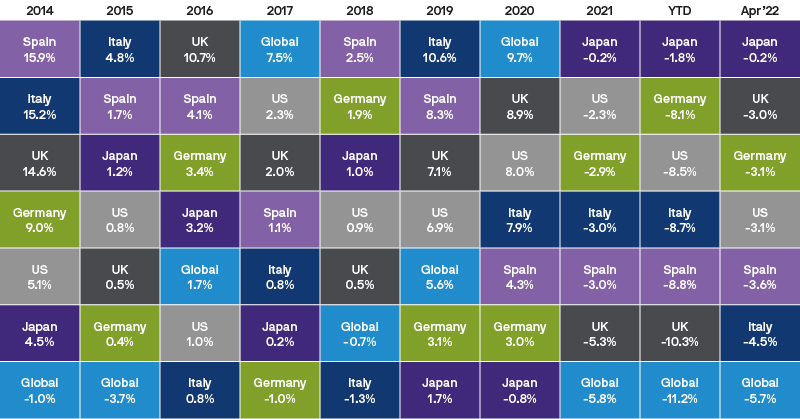 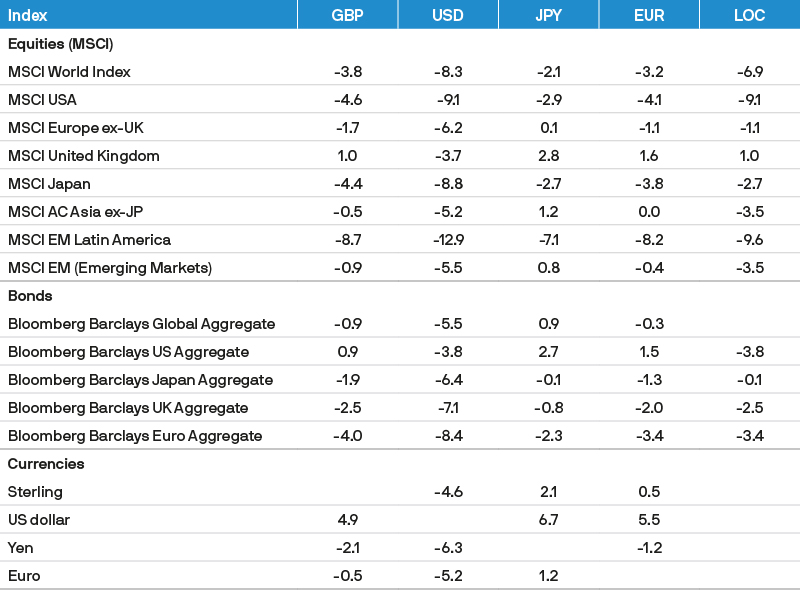 Source: Bloomberg Barclays, MSCI, Refinitiv Datastream, J.P. Morgan Asset Management. Past performance is not a reliable indicator of current and future results. Data as of 30 April 2022.

The global economy entered 2022 with strong tailwinds. While robust labour markets and large amounts of pent-up savings remain supportive, risks to the recovery are building, most notably in Europe. Central bankers face substantial challenges as they look to tighten policy to help bring inflation back down to target without tipping the economy into recession. Against this backdrop, we see the potential for further pressure on equity valuations ahead. Companies that can maintain healthy margins thanks to strong pricing power will likely be relative outperformers. In fixed income, the case for owning duration is stronger than it was at the start of 2022, but yields may still rise further as central banks push ahead with their tightening plans.