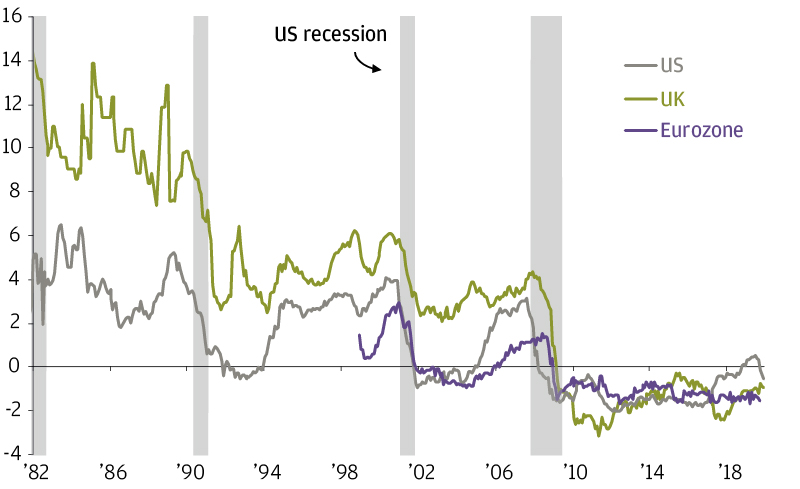 Indeed, central banks are determined to do whatever it takes to keep the expansion going. Having cut interest rates by 75 basis points and injected liquidity to calm tensions in the repo market, the Federal Reserve (Fed) has indicated that policy will pause while the dust settles. The European Central Bank’s (ECB’s) sizeable package of stimulus included an open-ended commitment to purchase government and high-grade corporate bonds.

The Bank of England (BoE) has been caught in the Brexit headlights for some time, but has indicated some inclination to lower interest rates should the outlook deteriorate. However, an almighty fiscal expansion may end up doing much of the heavy lifting to support the UK economy in 2020.

The message to investors from the central banks is clear: should further stimulus be required, it will be delivered. The Fed is under particular political pressure to demonstrate that it is a ‘national champion’.

The central banks do not believe they are out of ammunition. They have new innovations up their sleeves. Quantitative easing has now been accepted as a ‘normal’ tool. Ambitions to return assets to the public markets seem to have been abandoned and central banks have accepted permanently larger balance sheets. Indeed, some are happy to take an increasing share of risk markets. With such large holdings of government and corporate bonds, the Bank of Japan is increasingly focusing its balance sheet expansion on the purchase of corporate equity (see below).

There is also a growing consensus that zero is not the lower bound on interest rates. In theory, this is simply an extension of normal interest rate policy; interest rates are cut to entice savers to spend, but negative interest rates have the added sting in the tail that savers will be penalised if they persist in their prudence. Christine Lagarde, the new president of the ECB, may have little choice but to pursue negative rates further if European activity and inflation fail to pick up. We suspect, however, that her greatest contribution will come from her diplomatic skills, which will be necessary to advance the discussion among policymakers and politicians on the need for both fiscal expansion and further integration.

Whether negative interest rates serve to boost private sector spending remains to be seen. But this may not be the primary channel of transmission. Low interest rates are an enormous cash windfall for governments, and could encourage governments to turn on the fiscal taps. This certainly seems to be playing out in the UK, where austerity has been well and truly declared over.

Long duration government bonds now provide little to no income in much of Europe. Discover the alternatives to consider when trying to improve a portfolio.

Considerations for investors in the near-term given uncertainties

We address investor uncertainty by outlining three different post-pandemic scenarios, assessing the risks and opportunities that present under each.