Following an off-cycle monetary policy meeting on July 14, the Monetary Authority of Singapore (MAS) announced it would re-center the mid-point of the Singapore dollar nominal effective exchange rate (S$NEER) policy band (Fig 1a) to its prevailing level – implying an approximate 1.6% increase.  Meanwhile, the slope and width of the S$NEER band were left unchanged.

While the timing of the MAS statement was a surprise, the market was expecting further policy tightening. As the central bank acknowledged in the accompanying statement,  external and domestic factors have exerted further pressure on inflation (Fig 1b) and action was required to prevent price pressures becoming more persistent.

Singapore’s second quarter GDP, also published on July 14, was flat at 0.0%q/q (4.8%y/y). This highlights the dichotomy facing the MAS.  Weaker external demand, as trade and manufacturing momentum faded, was partially offset by a rebound in domestic demand. The latter has benefitted from a reopening of borders and easing of social distancing restrictions which boosting local and tourist spending.  Notably, while, the MAS expects local growth to remain reasonable for the remainder of the 2022 (at the lower half of its 3-5% range), it highlighted downside risks to growth in 2023 as global “monetary policy tightening… dampens consumption and investment demand”.

Of more immediate concern to the MAS is the rapid and broad increase in consumer prices.  Headline inflation hit a decade high of 5.6%y/y in May, while core inflation jumped to a 14-year high of 3.6%y/y, on sharp price rises across goods, services, food, transport and utilities.  The MAS expects inflationary pressures will remain elevated in the months ahead, and is increasingly concerned about pass-through cost pressures and upside risks to domestic wage pressures. Reflecting these concerns, the central bank revised its 2022 headline CPI forecast by 0.5% to 5-6% and its core CPI forecast up by 0.5% to 3-4%. 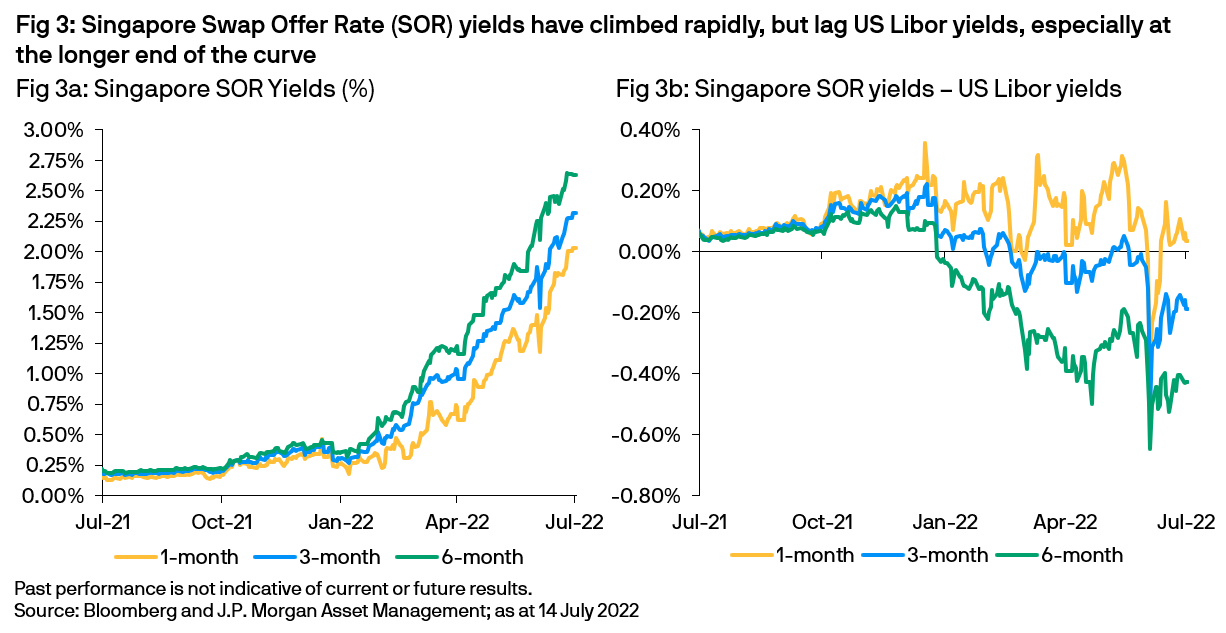 The MAS, historically one of Asia’s most hawkish central banks, originally pivoted to a hawkish bias at its October 2021 meeting. However, despite early hikes, the speed and breath of inflationary pressures caught the central bank off guard and has necessitated faster and more aggressive hikes over the past several months.  With the MAS expecting upside risk to inflation from fresh shocks to global commodity prices and domestic wage pressures, we believe further hawkish actions are likely at its next monetary policy meeting in October.

For SGD cash investors, short term yields have finally returned to pre-Global Financial Crisis levels, presenting attractive yields during a period of broad market volatility.  With the MAS and Federal Reserve focused on combatting inflation via front-loaded rate hikes, this trend is likely to continue. Nevertheless, we believe robust diversification across tenors and instruments remain important to help achieving an optimal risk-return strategy.

Diversification does not guarantee investment returns and does not eliminate the risk of loss. Yields are not guaranteed. Positive yield does not imply positive return.