Our 2023 base case of positive returns for developed market equities rests on a key view: a moderate recession has already largely been priced into many stocks.

By the end of September 2022, the S&P 500 had declined 25% from its peak. Historically, following this level of decline, the stock market has tended to be higher a year later. There have been two exceptions since 1950: the 2008 financial crisis and the bursting of the dot-com bubble in 2000.

We don’t see macroeconomic parallels with 2008, but what about valuation similarities with 2000? One risk to our bullish base case scenario for stocks would be if valuations still need to fall considerably further from here.

S&P 500 valuations started 2022 not far off those seen during the dot-com bubble. However, high valuations could largely be attributed to growth stocks (Exhibit 10). Despite underperforming in 2022, these stocks are still not particularly cheap by historical standards. 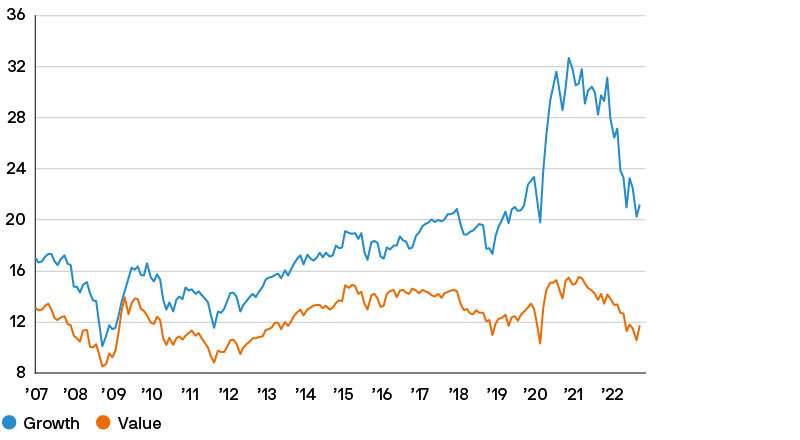 Source: MSCI, Refinitiv Datastream, J.P. Morgan Asset Management. Past performance is not a reliable indicator of current and future results. Data as of 31 October 2022.

Value stocks, however, are now quite reasonably priced compared with history. We have stronger conviction that value stocks will be higher by the end of 2023 than we do for those growth stocks that still look expensive. However, a peak in government bond yields could provide some support to growth stock valuations in 2023.

Another risk to equities is that consensus 12-month forward earnings expectations currently look too high, having only declined by about 5% from their recent peak. A recession is likely to lead to further reductions in earnings expectations. We believe that in a moderate recession, 12-month forward earnings estimates are likely to decline somewhere around 10% to 20% from the peak, as they did in the 1990s or early 2000s.

While some might argue that when these earnings downgrades materialise, they will lead the stock market lower, we believe that the market has already priced in some further downgrades to consensus forecasts (Exhibit 11). For example, at the beginning of 2022, US bank stocks were reasonably valued at 12x earnings and consensus 12-month forward earnings forecasts rose about 10% over the course of the year – yet bank stocks fell about 35% from peak to trough. This supports our view that the market is already factoring in worse news than consensus earnings forecasts suggest.

Source: MSCI, Refinitiv Datastream, J.P. Morgan Asset Management. Earnings are 12-month forward earnings expectations. Past performance is not a reliable indicator of current and future results. Data as of 31 October 2022.

We also note that the interaction between consensus earnings forecasts and markets has been inconsistent over time. In the early 2000s and in the 2008 financial crisis, reductions in earnings forecasts led to further stock market declines; but in the early 1990s, stocks rallied as 12-month forward earnings expectations declined (Exhibit 12).

Performance of the S&P 500 vs. drawdown in 12-month forward earnings
%, drawdown from local peak 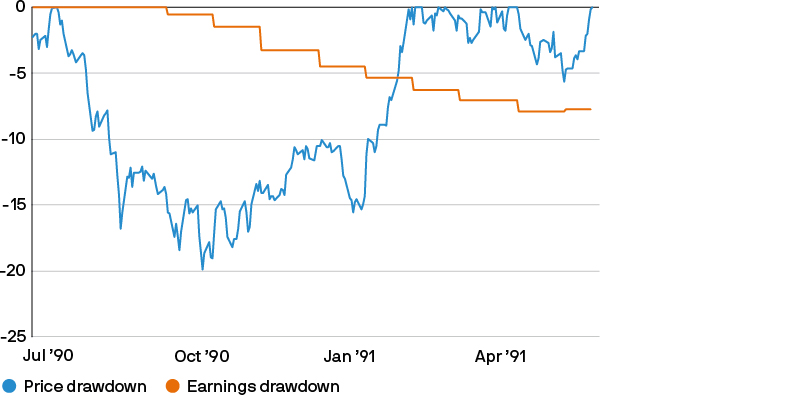 While falling earnings forecasts could lead stocks lower, if the magnitude of the decline in earnings is moderate – as we expect – then it would likely only lead to limited further downside for reasonably valued stocks, relative to the declines already seen in 2022.

We acknowledge that it would be unusual for the stock market to have bottomed already—that does not tend to occur before the unemployment rate has started to rise and the Federal Reserve (Fed) has started to cut interest rates. However, the market has already declined much more than usual before jobs have started to be lost. Given this is probably the best predicted recession in the last 50 years, we believe there is a chance that equity markets could have priced it in sooner than they normally do.

Overall, while we are not calling the bottom for equity markets, we do think that the risk vs. reward for equities in 2023 has improved, given the declines in 2022. With quite a lot of bad news already factored in, we think that the potential for further downside is more limited than at the start of 2022. Importantly, the probability that stocks will be higher by the end of next year has increased sufficiently to make it our base case.