At its monetary policy meeting on 4 of October, the Reserve Bank of Australia (RBA) raised its Overnight Cash Rate (OCR) by 25 basis points (bps) to 2.60% (Fig 1a).  This was the sixth hike in the current cycle as the central bank attempts to reconcile a “committed to returning inflation to the 2-3%” while “achieving a sustainable balance … in the Australian economy”.

A commitment to guidance:

The recent combination of stronger than expected global inflation momentum and elevated market volatility had renewed hawkish global central bank rhetoric – and boosted market expectations that the RBA would continue hiking aggressively to ensure alignment with a predicted higher peak in global policy rates (Fig 1b).

However, the central bank demurred, preferring to stick with previous guidance and noting “the cash rate has been increased substantially in a short period of time. Reflecting this, the Board decided to increase the cash rate by 25 bps this month as it assesses the outlook for inflation and economic growth in Australia”.

While slowing the cadence of rate hikes, the RBA confirmed it still “expects to increase interest rates further over the period ahead”- a necessary pledge given domestic economic data remains robust with few signs of dampened demand.  Unemployment is close to record lows at 3.5%, supporting healthy retail sales and a rebound in consumer confidence.  Business conditions also exhibit persistent strength (Fig 2a), helped by solid demand and companies’ ability to pass on higher costs.

Predictably the housing market has been negatively impacted with house prices (Fig 2b) declining and new loans falling for the past several months in response to higher mortgage rates.  Nevertheless, following the initial negative reaction, property conditions have stabilized with high clearance rates, reasonable affordability and elevated valuations relative to historic levels. 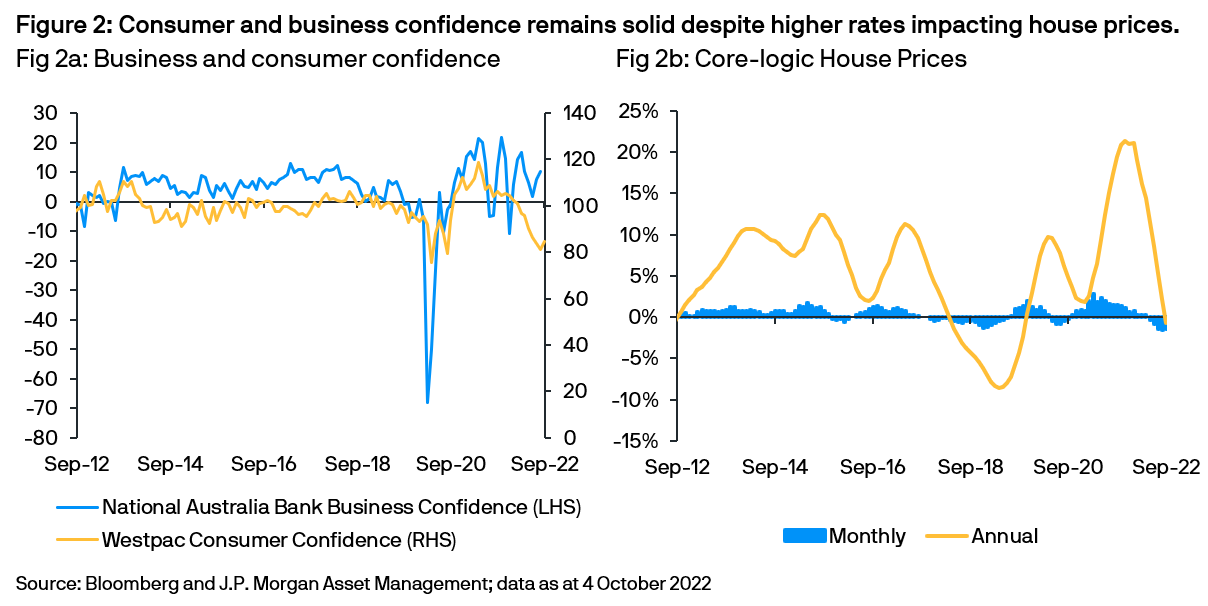 Following the smaller than expected RBA rate hike, the AUD weakened versus the USD and bond yields declined across the curve as economists reassessed the steadfastness of the central banks guidance pivot.  The market still expects further rate hikes in November, December and into 2023, although the terminal rate prediction has declined slightly.

While acknowledging that “price stability is a prerequisite for a strong economy”, the RBA’s tone has shifted as it confirmed that “keeping the economy on an even keel” was also a priority.  With inflation expected to peak at a significantly lower level (7.75% y/y) relative to other Western markets, the central bank obviously believes its prior front loading has given it flexibility to slow the pace of hikes.  Future employment, wage growth and inflation trends will be critical determinants if the RBA can maintain its commitment to guidance.