A dovish pivot? Too early to judge

At its 27 October policy meeting, the ECB’s Governing Council voted to raise key eurozone interest rates by 75bps, in-line with market expectations. The deposit rate increased to 1.50%, the marginal lending facility to 2.25% and the main refinancing rate to 2.00%. The central bank’s rationale for a third large rate hike was the recognition that inflation remains “far too high”. Headline inflation only narrowly avoided printing in double digits in September (at 9.9%) and signs of a broadening in price pressures were evident, with the core inflation reading reaching a new high of 4.8% (Figure 1). 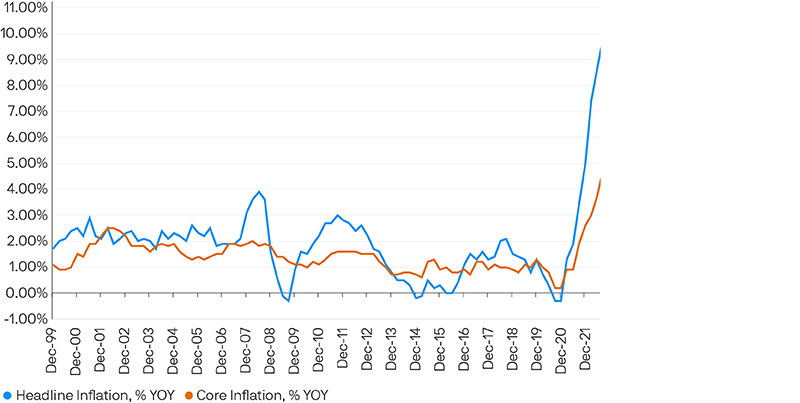 However, in the accompanying statement, the Bank removed the reference to front-loading rate hikes and added that it has “made substantial progress in withdrawing monetary policy accommodation”. This is not that surprising considering the ECB has already hiked by 200bps in the past four months – its fastest ever pace of rate rises. Nevertheless, the Bank confirmed that it expects to raise rates further and during the subsequent press conference, ECB President Lagarde remarked that rates may have to go beyond normalisation to curb upward pressure on prices.

The dichotomy of ECB comments will likely magnify debate regarding the magnitude of its next rate move, although the ECB wisely shied away from forward guidance and maintained its commitment to a data dependent view. While some of the latest changes in language and tone do suggest the potential for a reduction in the size of future rate hikes, any upside inflation surprises will keep the pressure on for a third consecutive 75bps move. Underlining this point, the first estimate for October inflation came in ahead of expectations, with both headline and core readings reaching new record highs of 10.7% and 5.0% respectively.

The ECB’s next growth and inflation forecasts, presented at the December meeting, will be a key indicator of the Bank’s thinking. Though one thing seems certain, the ECB has not finished and acknowledged “we have more ground to cover”.

On the topic of the ECB’s massive balance sheet following several years of quantitative easing, President Lagarde said the Council would discuss important criteria for a reduction in December. This raised the prospect of quantitative tightening (QT) starting in early 2023. The timing, style and size of any QT programme will have a strong impact on euro bond markets, which suggests a gradual approach – at least initially.

In anticipating future balance sheet reduction, the ECB announced a change in the terms of its targeted longer-term refinancing operations (TLTRO 3), which was launched in the wake of the Covid pandemic. By increasing the cost of this funding, the ECB reduces the arbitrage opportunities for banks and potentially motivates them into early repayment. The central bank announced three additional windows for banks to do so, the first being on 23 November. Given the abundant levels of excess liquidity still present in the euro system, we believe this will probably not have a significant impact on money market rates. It does, however, work in the same direction as the ECB’s other monetary policy tools and could have the added benefit of being marginally helpful to the scarcity of collateral currently impacting the euro re-purchase (repo) markets.

The latest action by the ECB moves the deposit rate to its highest level in more than a decade (Figure 2). With money market rates still closely aligned to the deposit rate, euro cash investors will benefit from a significant increase in net yields. 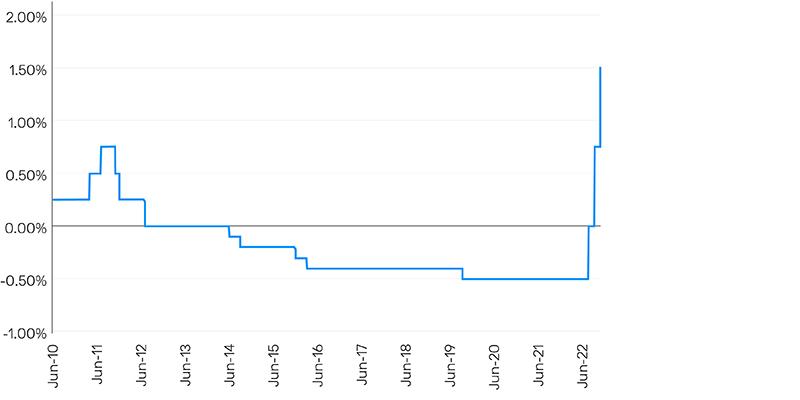 In anticipation of ongoing ECB rate hikes, the money market curve has continued to increase significantly in recent months and remained relatively steep (Figure 3) – implying widespread opportunity to add positive yield. J.P. Morgan’s euro liquidity funds were well positioned for a front-loaded ECB tightening cycle, having reduced weighted average maturity (WAM) to a historical low. Fund yields will move higher as they benefit from higher deposit rates and steeper yield curves, albeit with a few weeks lag for reinvestment to catch up fully. 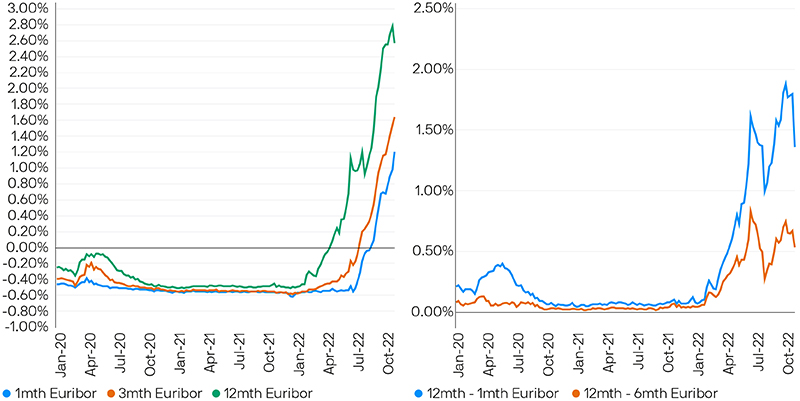 Elevated uncertainty regarding the likely inflation peak and the extent of the likely economic downturn suggests European interest rates will remain volatile. We believe euro investors should continue to take a cautious approach to cash management, ensuring sufficient diversification and laddering to optimise the balance of risk and return.

Source for all data is ECB, as at 28 October 2022, unless otherwise stated.