The latest ECB rate hike, described in the press release as a “major step”, was not a complete surprise given several of the more hawkish ECB members had commented ahead of the meeting that 75 bps should be “on the table”. The increase moves the deposit facility rate to 0.75%, the refinancing rate to 1.25%, and the marginal lending facility to 1.50%.

The catalyst for this record hike was the ever-increasing levels of inflation. Ahead of the meeting, August headline and core inflation had printed at record highs of 9.1% and 4.3% respectively (Figure 1). The latest staff forecasts also made for uncomfortable reading, with headline inflation now expected to average 8.1% in 2022, 5.5% in 2023 and 2.3% in 2024. This move further away from target in the medium term (June’s 2024 forecast was at 2.1%) means that the ECB is likely to continue to normalise policy rates in the months ahead. 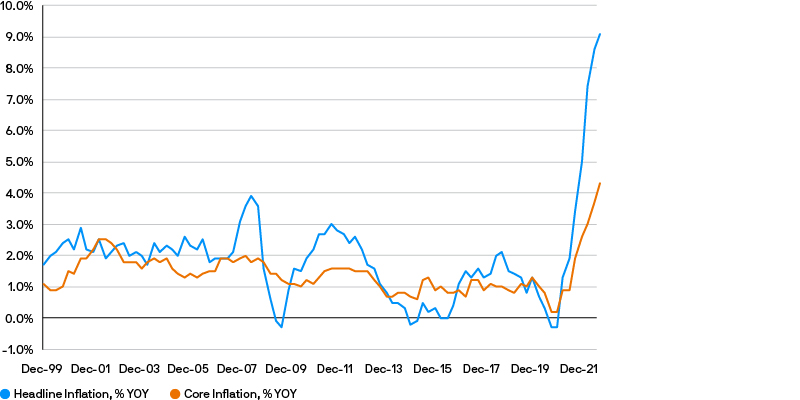 The ongoing conflict in Ukraine and the consequent energy crisis are weighing with increasing intensity on the purchasing power of people’s incomes, and on both business and consumer confidence. As a result, after a decent rebound in economic activity in the first half of 2022 as Covid abated, things are expected to become much tougher in the second half. These downside risks are reflected in the base case staff forecasts for growth, which were revised to 3.1% for 2022, 0.9% for 2023 and 1.9% in 2024. The 2023 forecast represents a significant downgrade on the June projection of 2.1% and encompasses an expectation that the economy will “stagnate later in the year and in the first quarter of 2023”. Many will feel that forecasting the avoidance of recession is too optimistic, though the ECB did also include a downside forecast where growth potentially contracts in 2023 by 0.9%.

Despite these concerns around growth, the ECB is firmly focused on the fight against inflation amid signs that “price pressures have continued to strengthen and broaden across the economy”.

No changes were made to asset purchase programmes, with maturities for the Asset Purchase Programme (APP) and Pandemic Emergency Purchase Programme (PEPP) continuing to be fully reinvested (with the PEPP commitment remaining in place until at least the end of 2024). Comments subsequent to the meeting suggest that discussions regarding quantitative tightening could begin as early as the October meeting.

An important decision was taken to temporarily lift the 0% renumeration cap on government deposits at the ECB (until the end of April 2023). These balances, which currently exceed EUR 500 billion will be renumerated at the lower of the euro short-term rate (ESTR) and the deposit rate. Without this decision there was concern that these balances would be redirected towards the repo market, which is already facing issues of collateral scarcity. This measure was taken to "preserve the effectiveness of monetary policy transmission and safeguard orderly market functioning."

This latest action by the ECB moves the deposit rate decisively into positive territory for the first time in more than 10 years (Figure 2). With money market rates still closely aligned to the deposit rate, the result is that euro cash investors will very soon welcome the return of positive net yields. 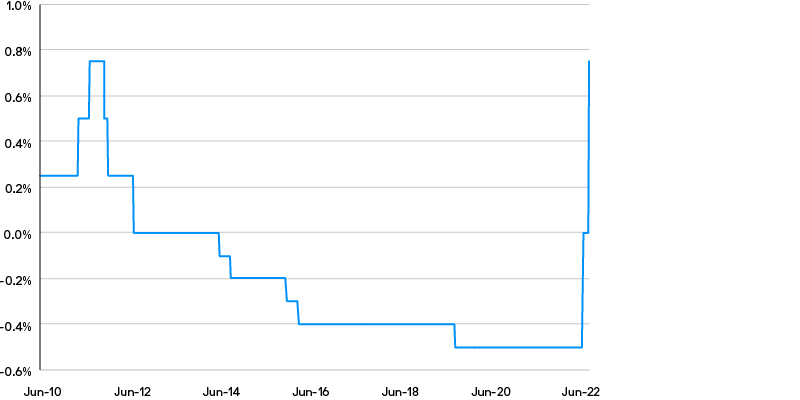 The yield on deposit and repo investments will step up on 14 September (the start of the next reserve period); however, with system wide liquidity still abundant, it remains to be seen whether commercial banks will pass on the full rate hike to depositors.

In anticipation of ECB rate hikes, the money market curve has risen significantly in recent months and remained steep (Figure 3), meaning there is now widespread opportunity to add positive yield. J.P. Morgan’s euro liquidity funds were well positioned for a front-loaded ECB tightening cycle. While fund yields will move higher as they benefit from higher deposit rates and steeper yield curves, it will take a few weeks for reinvestment to catch up fully. 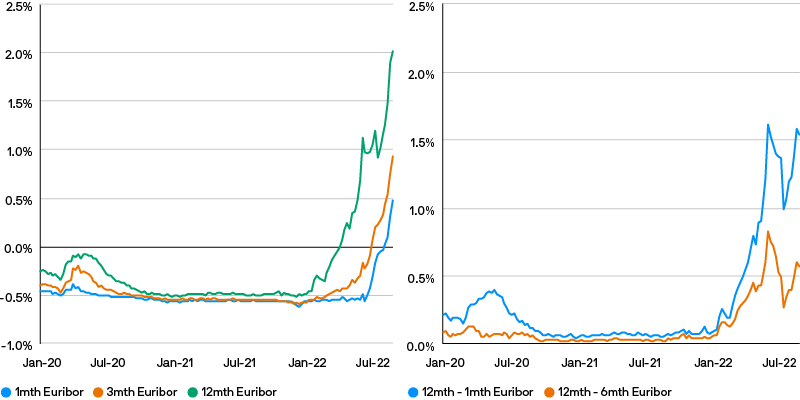 With further rate hikes likely despite an uncertain economic backdrop, we believe euro investors should take a cautious approach to cash management, ensuring sufficient diversification and laddering to optimise the balance of risk and return.

Source for all data is ECB, as at 9 September 2022, unless otherwise stated.