Carefully calibrated four in a row as rates top 1%

The BoE delivered on market expectations, increasing the Bank Rate by 25 bps at its May MPC meeting and bringing rates to 1% for the first time since the Global Financial Crisis (Figure 1), in what Governor Andrew Bailey described as a ‘carefully calibrated decision’. This is the first time since August 1997 that the BoE has hiked rates at four consecutive meetings as it continued its commitment to normalise interest rates and prevent the recent sharp price rises becoming engrained.

However, the changes to the MPC’s forecasts highlight the dilemma it faces over future policy moves. Inflation is now expected to peak at over 10% in the fourth quarter of 2022, with policymakers citing higher household energy costs, while at the same time this shock to real incomes is expected to send the UK economy into contraction. If the Bank opts to significantly tighten monetary policy to address surging inflation, it could risk exacerbating the projected recession.

There was no consensus among MPC members about the appropriateness of future tightening, with a range of views on the balance of risks. This could suggest that the path of rates is uncertain and ‘necessarily unpredictable’, with potential further hikes delivered less rapidly and to a lower terminal rate than previously anticipated, which would have significant implications for interest rates, yields curves and cash investors.

While the Bank Rate remains the preferred active policy tool in most circumstances, the Committee did say that it would now consider beginning the process of active sales of UK government bonds within the Asset Purchase Facility (APF) – remaining stock is currently £847 billion (Figure 2) – with an update to be provided at the August 2022 meeting. The BoE previously announced in February that sales of the APF £20 billion investment-grade corporate bonds would be completed around the end of 2023. 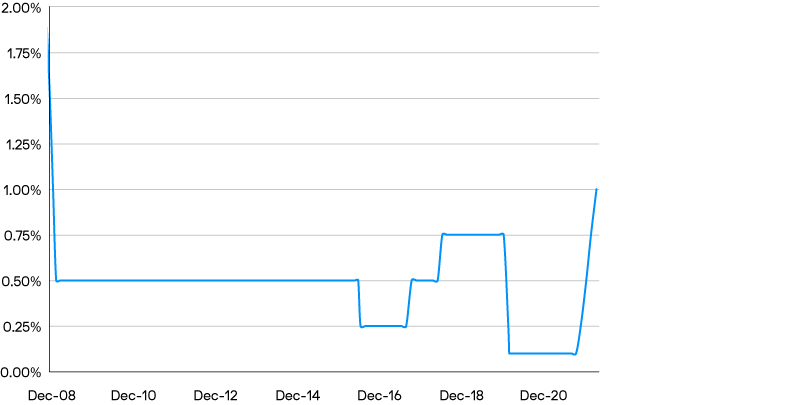 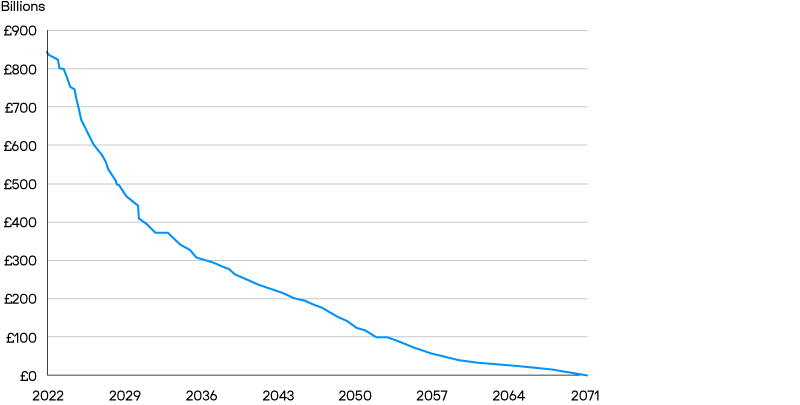 Walking the ‘narrow path’ between inflation and growth

Inflationary pressures have intensified globally, both due to the conflict in Ukraine and supply chain disruptions in China from Covid-19 related lockdowns. These energy and tradeable goods price increases have caused the second largest decline in real household incomes since records began in 1964, and the BoE now expect annual Consumer Price Index (CPI) to peak at 10.2% year-on-year in Q4 2022. While more persistent domestic influences have also strengthened, they are only contributing about one fifth of the price growth, and despite the expectation for external factors to wane, the cost of living crisis will impact growth momentum in the medium-term as looser financial conditions fade. UK Gross Domestic Product (GDP) is now expected to slow down sharply over the next 18 months with growth projections for 2022 at 3.75% (unchanged) but falling 0.25% in 2023 (compared to a rise of 1.25% at the February Monetary Policy Report (MPR)).

As rising inflation weighs on activity, the BoE will continue to walk a ‘narrow path’ between this trade-off of demand and growth versus risks of second round effects and rising domestic cost pressures.

Further hikes warranted – but risk of a pause?

The latest CPI inflation forecasts in the May MPR suggest that based on the market implied path for Bank Rate – rising to 2.50% by the middle of 2023 – modal CPI inflation is expected to fall back towards, but remain above, the BoE’s stated 2% target over a two year horizon (Figure 3) as the influence of external factors wane and demand slows. The same data over a three-year horizon implies inflation will significantly undershoot the target, reaching 1.3% sometime in the second quarter of 2025. At the same time, unemployment is expected to continue to tighten through the next couple of quarters before rising to nearly 5.5% by the end of the forecast horizon (Figure 4).

While there are upside risks to the forecast from commodity prices as the situation in Ukraine evolves, and the tightness of the labour market, the need for further rate hikes will ultimately depend on how the economy evolves from here.

Sterling cash investors should welcome this further increase in Bank Rate as improved overnight rates allow liquidity and ultra-short duration strategies to boost returns – albeit with a slight delay due to the need to reinvestment maturities.

However, the trade-off between inflation and growth and the uncertainty surrounding the risks suggests bond yield and curve volatility could remain high. The increased risk of capital losses on longer duration strategies should warrant a disciplined approach to cash segmentation and by prioritising a combination of money market and ultra-short duration strategies, sterling investors can aim to optimise returns without excessively increasing risk or volatility.