What challenges are the Chinese economy and markets facing?

Given the negative sentiment toward Chinese equities but the long-term opportunities afoot, lower current equity valuations could present attractive entry points for investors.

The Chinese economy and markets have had a challenging 2021. Chinese equity markets were one of the best performers last year, notching a 29.7% gain in USD terms; this year they are one of the worst performers down 12.8%. 3Q21 economic growth revealed a pronounced slowdown to 4.9% y/y compared to 7.9% y/y in 2Q21. Because China was the first economy to emerge from the early phases of the pandemic, most anticipated that it would experience a slowdown as it moved from recovery to recovered. However, the slowdown has been exacerbated by reforms aimed at ensuring long-term economic stability despite the short-term challenges they pose to sentiment and growth. For Chinese equity markets in particular, these periods of drawdowns tend to be related to uncertainty generated by new reform and regulatory cycles, such as the one we are seeing today, more so than the economic cycle itself.

Although Chinese policymakers targeted “at least 6% growth” this year, they anticipated there would be some room to implement reform aimed at curbing excesses from rapid economic growth over the recent decades, pivoting to higher quality growth drivers, and bolstering the middle class through reductions in property, education, and health care costs. While these measures should result in a healthier Chinese economy in the long run, in the short-term they are dampening sentiment and posing headwinds to growth. To combat some of those effects, Chinese policymakers have adopted a moderately more accommodative fiscal and monetary stance - albeit in a very targeted way aimed at sectors it aims to bolster going forward.

Ultimately, China strives to become the largest economy in the world, doubling its GDP per capita over the next decade, which means they will support high growth areas of the economy while enacting reforms on other areas that need to be reined in. This supports long-term portfolio opportunities in sectors that will benefit from the emerging consumer, advancing technology, and clean energy. Given the negative sentiment toward Chinese equities but the long-term opportunities afoot, lower current equity valuations could present attractive entry points for investors. 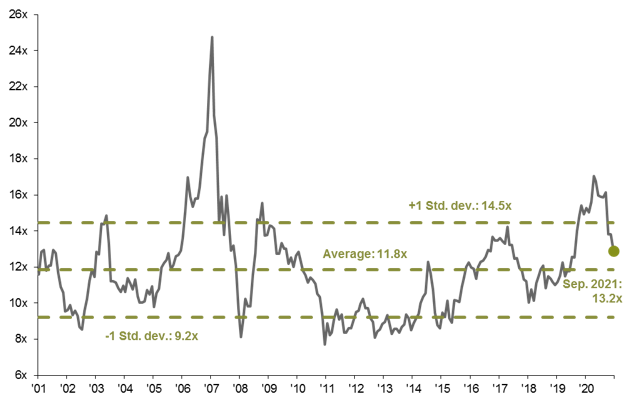