Policy and Politics: The Fiscal and Midterm Election Outlook

The fast-approaching midterm elections and the recent spate of legislation has brought policy and politics back to the fore. This has investors considering several key questions:

Politics: How might the balance of power shift in Congress after midterms?

The midterm elections are swiftly approaching and the prospects for Democrats to hold on to their slim majorities in Congress are dim.

The Senate is currently split 50/50 with Vice President Kamala Harris casting tie-breaking votes on items that only require a simple majority. In the upcoming midterms, 35 Senate seats are up for election, 21 currently held by Republicans and 14 held by Democrats. There are eight toss-up races: Arizona, Georgia, Nevada, New Hampshire, North Carolina, Ohio, Pennsylvania, and Wisconsin (four currently held by Democrats, four held by Republicans). Republicans only need to flip one seat if they maintain their current ones to take control of the Senate, but highly competitive races have made the balance of power in the Senate too close to call.

All 435 seats are up for election in the House of Representatives, and the Democrats currently have a four-seat majority if vacant seats, all previously held by Republicans, are retained. Typically, big swings occur in midterm election years. The president’s party has lost House seats in 17 of 19 midterm elections since World War II and Senate seats in 13 of 19. The average seat loss has been almost 27 seats in the House and 3 to 4 seats in the Senate. This historical pattern, compounded by the reapportionment and redistricting processes following the 2020 Census results, should favor Republicans.

To add to these headwinds, midterms are often a referendum on the new administration and the economy. The president’s approval rating has improved recently but is still near its lows. Although unemployment is at its lowest in over 50 years, inflation at a 40-year high is weighing on the consumer.

Politics attracts the headlines, but ultimately it is policy, not politics, that impacts the economy and markets.

The administration notched two major policy achievements in 2021: a 1.9 trillion USD COVID stimulus package and a 1.2 trillion USD bi-partisan infrastructure package. Although the first half of 2022 was quiet, multiple major legislative and executive actions passed this summer.

The first was the 280 billion USD bi-partisan CHIPS and Science Act, which includes 52 billion USD for semiconductors and funding for science and technology research and development to maintain the U.S.’s competitive edge, particularly over China.

The second was the Inflation Reduction Act (IRA), a package that includes climate spending, prescription drug pricing reform, and tax reform. The IRA seeks to raise 737 billion USD in revenue over ten years through a 15% corporate minimum tax on companies earning over 1 billion USD in profits, a 1% tax on stock buybacks, greater IRS enforcement, and allowing federal officials to negotiate directly on prescription drug costs. Although these tax increases will be a headwind for corporate profits in 2023, heftier tax hikes on capital gains, estates, and the top marginal tax rates for individuals and corporations were avoided.

Although the Inflation Reduction Act is unlikely to have a measurable impact on inflation, it should reduce the deficit by about 300 billion USD over the next decade. In fact, the IRA and the CHIPS Act together could lead to small reductions in the deficit over the next two years that would likely leave enough fiscal space to avoid reaching the debt ceiling until 2024.

The third item is the extension of the student loan payment moratorium, which was set to expire on August 31, to December 31, 2022, and forgiving up to 10,000 USD in student loans (up to 20,000 USD for Pell Grant recipients) for individuals making less than 125,000 USD a year. Together, this is likely to be inflationary over time and could increase the deficit by 440-600 billion according to the Committee for a Responsible Federal Budget (CRFB), more than neutralizing the deficit reduction of the IRA. The CRFB also estimates the overall level of student debt would return to current levels within five years. However, student loan forgiveness could face considerable opposition in the courts and may not come to fruition.

Going forward, however, if the midterms play out as history suggests and we have some form of divided government, we are likely to experience political gridlock during the next two-year term. Republicans and Democrats have already compromised on infrastructure, semiconductors and technology, and defense spending in response to the war in Ukraine. There are few remaining areas for further bi-partisan cooperation, and in fact we could see budget standoffs that lead to government shutdowns. Although both parties came together on fiscal stimulus during the last recession, if the U.S. enters recession after the midterms, we are unlikely to see fiscal stimulus from divided government.

From an economic perspective, less spending and therefore less borrowing should lead to lower deficits, which is positive for federal finances but prolongs the fiscal drag, resulting in slower economic growth.

Fiscal: What is the long-term fiscal outlook?

Divided government would likely improve the fiscal outlook as political gridlock has historically reduced spending and therefore borrowing. However, deficits have already improved more than expected in 2022. The deficit through July was 727 billion USD, 1.8 trillion USD less than at the same point last year, and less than the 867 billion USD it was through July 2019. The Congressional Budget Office estimates the total 2022 deficit will be under 1 trillion USD or 3.9% of GDP when the fiscal year ends September 30th. Even considering the potential impacts of recent legislation, the deficit is likely to be relatively stable over the next few years.

Yet, the U.S. is still sitting on a mountain of debt, which is projected to rise from 98% of GDP to 107% by 2031. Although the U.S. defaulting on its debt is not a realistic risk, debt service is going to become more expensive as rates rise.  The average interest rate on debt held by the public was 1.8% in 2021 but is set to steadily rise to 3.1% by the end of 2032. However, this will not happen all at once. Some of that debt was locked in at very low rates. About half of federal debt is less than 3 years in maturity (with an average maturity of about 6 years), so unless and until the government needs to refinance that debt, higher rates won’t have an immediate impact to all debt. Because a lot of the debt issued in the last two years was for one-time spending on COVID recovery, not all debt will need to be rolled over.

It is difficult to estimate at what rate debt service becomes unsustainable, but the higher cost of interest payments will be a drag on U.S. economic growth and could contribute to structurally higher long-term inflation.

Investment Implications: How should investors approach markets during a midterm election year?

Investing through market volatility, whether it’s due to elections or other uncertainties, requires discipline so that investors do not make mistakes that can derail them from reaching their investment goals. Investors should keep these four principles in mind while navigating this year’s midterm elections:

1. Don’t let how you feel about politics overrule how you think about investing.

Political opinions are best expressed at the polls, not in a portfolio. To illustrate this point, Exhibit 4 shows a survey from the Pew Research Center asking Americans how they feel about economic conditions. The results show that Republicans often feel better about the economy under a Republican president, while Democrats often feel better about the economy under a Democratic president. Yet, average annual returns on the S&P 500 during the Obama administration of 16.3% and during the Trump administration of 16.0% were almost identical and higher than the average return over the last 30 years of 10.6%. Investors who allowed their political opinions to overrule their investing discipline may have missed out on above-average returns during political administrations they didn’t like. 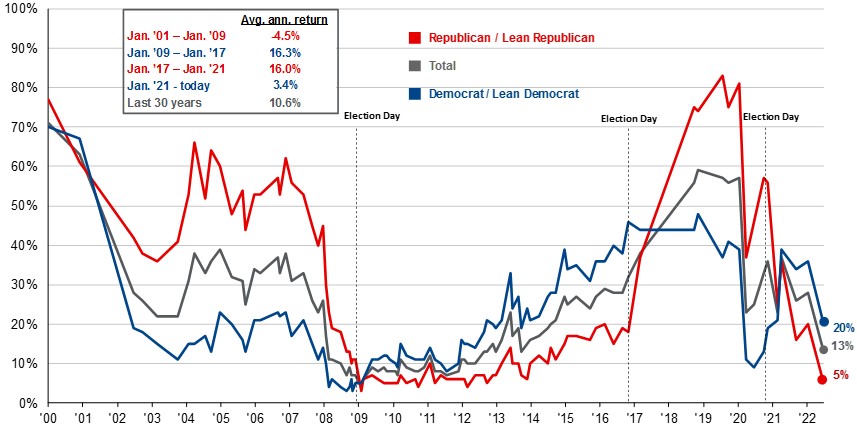 Source: Pew Research Center, J.P. Morgan Asset Management. Pew Research Center, June 2020, “Republicans, Democrats Move Even Further Apart in Coronavirus Concerns”. Question: Thinking about the nation’s economy, How would you rate economic conditions in this country today… as excellent, good, only fair, or poor? The survey was last conducted in July 2022. Guide to the Markets – U.S. Data are as of August 31, 2022.

2.  Patience is paramount during pre-election volatility…

Markets often experience lower returns and higher volatility during election years due to heightened uncertainty, as highlighted in Exhibit 5a and 5b. Yet, there are limits to what averages can tell us because financial crises, tech bubbles, pandemics, and geopolitical crises do not know the election calendar and have disrupted markets during past presidential or midterm election years.

EXHIBIT 5a & 5b: Returns and volatility during election years 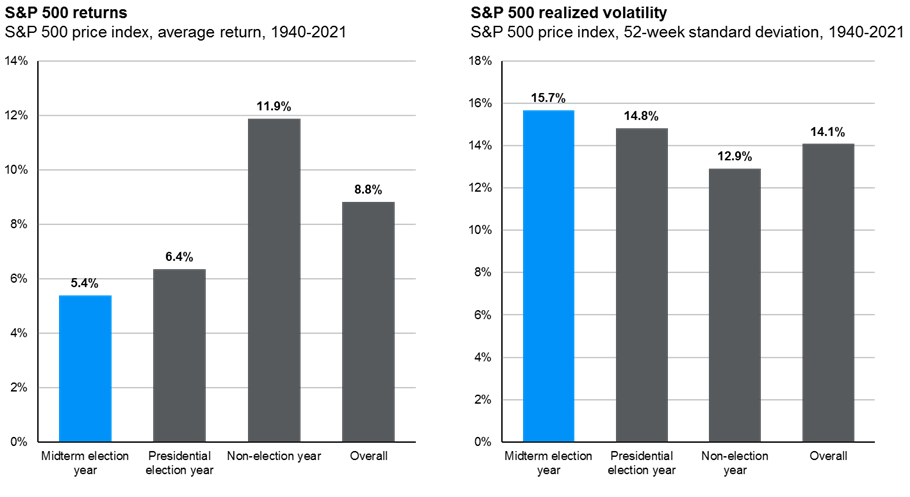 3.  …because markets do not like uncertainty and election results reduce it.

Some investors are eager to sit on the sidelines until election uncertainty passes, but risk missing subsequent rebounds. The two most recent presidential elections in 2016 and 2020 are prime examples of this. In the early hours of November 9, 2016, futures plummeted as election results were coming in, but markets closed 1.1% higher after that day’s regular trading session when the results were finalized. Markets were up 7.3% the week of the 2020 presidential election, despite not having an official result until the following Saturday.

Exhibit 6 highlights market performance 100 days before and following a midterm election. Median returns were -1%, 2%, and 5%, respectively, for the first three quarters of each midterm year since 1942, but fourth quarter returns jumped to 8%. Returns were positive in Q4 of most midterm years, underscoring that when uncertainty settles down, markets settle up.

Although typically Q4 returns after midterms are strong, there are two notable recent exceptions: 2018 and 1994. The Fed was tightening monetary policy during both of those periods, but crucially, pivoted shortly thereafter. The Fed paused its rate hikes after December 2018 and cut three times in 2019, and the Fed ended its rate hiking cycle in February 1995. Markets subsequently rebounded in both instances. Although the Fed is still a ways off from a pivot or pause, we are likely closer to the end of the Fed hiking cycle than the beginning.

We can’t predict what the Fed will do or when they will do it, but when it comes to market drivers, the Fed is the signal, and the midterms are the noise. 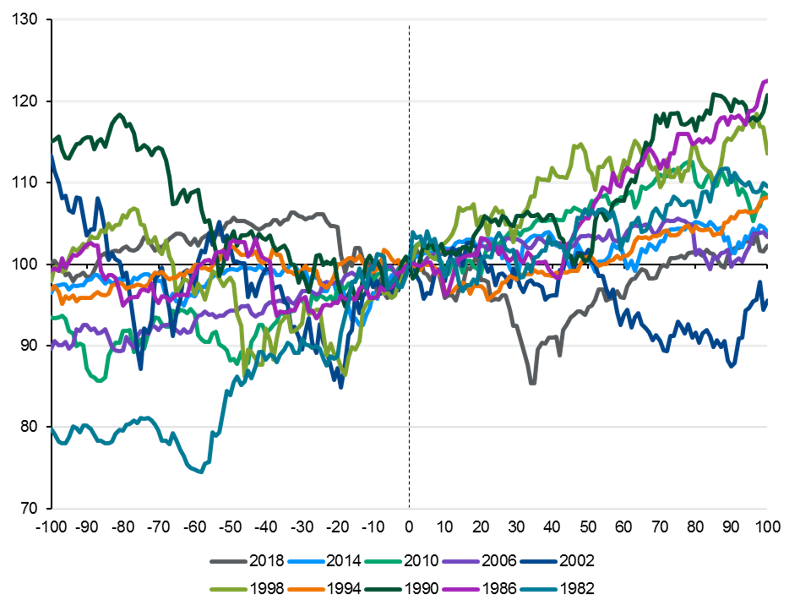 4. The economy has grown and the markets have risen under all political configurations.

If the midterms result in divided government, investors need not fear for the economy or markets. Divided government is the most common political configuration, occurring 61% of the time since World War II. The economy grew on average at a 2.7% pace under divided government, and market returns were 7.9%. Although political gridlock may not be productive from a legislative perspective, it should mean that policy takes a back seat for investors.

Although midterm elections are likely to garner significant attention, long-term investors should not overestimate their economic or market impact. The path of least resistance is divided government, which would likely yield political gridlock and few major policy actions, thereby limiting the increase in deficits. History shows that economic growth and market performance tend to do well during divided government. Therefore, investors ought to stay disciplined if political uncertainty foments short-term volatility and to remember that in this environment, the Fed is the signal, the midterms are the noise.

The midterm elections are less than six months away, and the prospects for Democrats to hold on to their majorities in Congress is slim.