The third quarter saw yet another decline in the S&P 500, as concerns that higher rates and tighter monetary policy would weigh on economic activity and earnings remained top of mind for investors. While the rally in October has been refreshing, it seems unlikely it is the beginning of a new bull market; investors are looking for signs of a pivot at the Federal Reserve (Fed), whereas best case they will get a pause. One of the biggest mistakes made by the Federal Reserve in the 1970’s was its inability to maintain a consistent policy stance, and today’s Fed seems keen to avoid repeating this mistake.

Analyst expectations were too high coming into this earnings season, as evidenced by the modest share of companies beating estimates alongside very weak earnings and revenue surprises. With 87% of market capitalization reporting, we are tracking a 3Q22 operating earnings figure of $52.32. If realized, this would represent year-over-year growth of 0.6% and quarter-over-quarter growth of 11.6%. 58% of companies have beaten earnings estimates while 55% of companies have beaten sales estimates, with earnings surprises near zero and revenue surprises in line with their long-run average. Importantly, margins have bounced back sharply to 11.8%, and buyback activity has added a full percentage point to the year-over-year growth rate.

Buybacks are once again contributing to EPS growth 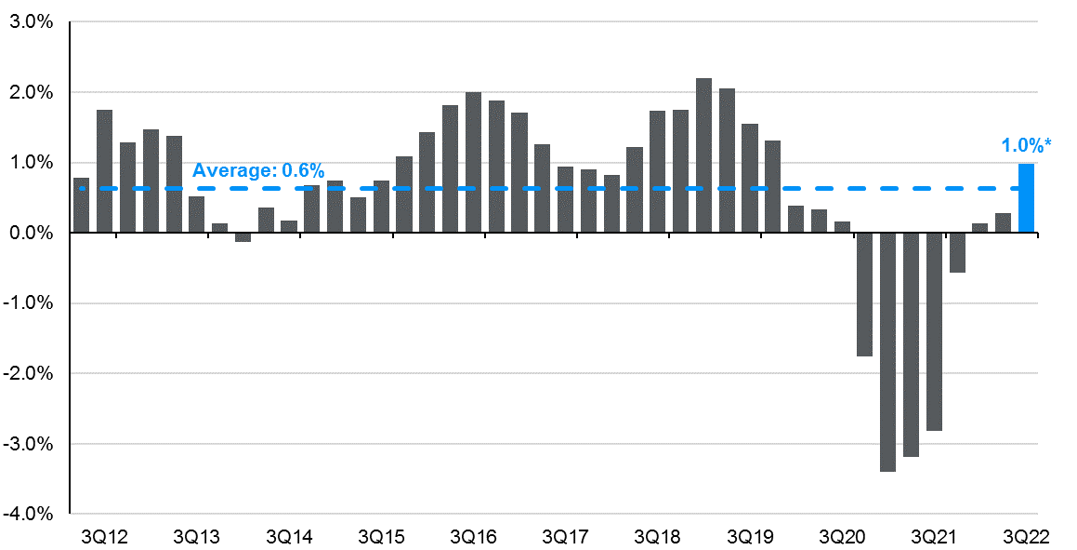 Source: FactSet, Standard & Poor's, J.P. Morgan Asset Management. *3Q22 share count contribution is an estimate based on over 75% of companies having reported results. All data are as of November 4, 2022.

As we move forward, 2023 earnings estimates will need to decline, which could lead equities to re-test their lows during the coming months. However, in contrast to the experience in the aftermath of the financial crisis, above-target inflation should prevent an outright collapse in earnings next year. That said, we recognize the risk to forward earnings estimates remains to the downside and expect equity markets will remain choppy as investors try to determine the outlook for employment and growth in 2023.

Earnings at energy and utility companies have been a bright spot, as average crude oil and natural gas prices increased 32% and 86% y/y, respectively, in 3Q22. While the impact of higher prices on energy sector profits is quite direct, earnings in the utility sector will see a more lagged impact. Regulators tend to increase the allowed return on equity as costs rise, which implies healthy utility profits over the next couple of quarters, even as inflations continues to decelerate.

Like energy and utilities, industrials are having a strong earnings season driven by higher prices and strong demand. Results were buoyed by the airlines, where management teams reiterated that they expect consumer demand for flying to remain resilient against a challenging macroeconomic backdrop. Railroads have recorded strong results as well, with higher volumes, pricing power, and fuel surcharges pushing profits higher.

The materials sector, on the other hand, is tracking a y/y earnings decline of 10.5% due to geopolitical uncertainties and higher costs. The sector derives 56% of its sales from outside the U.S. and has noted declining demand in China and Europe. Profits have also been hampered by unfavorable exchange rates, as the U.S. dollar strengthened 12.6% in 3Q22. Additionally, weaker consumer spending has driven a decline in packaging profits, while higher interest rates have slowed demand for items related to housing and construction.

Revenue growth among foreign exposed S&P 500 sectors under presssure from the U.S. dollar

Source: FactSet, J.P. Morgan. *Includes the following sectors: Consumer Staples, Information Technology, and Materials. All data are as of November 4, 2022.

Financials had another difficult quarter; while higher interest rates boosted net interest margins, results are down year-over-year due to an increase in provisions for loan losses, a drop-off in M&A and capital markets activity, and a notable slowdown in home lending. Despite the increase in provisions, however, net charge offs (NCOs) remained relatively low, but could begin ticking up at the regional level as interest rates rise amid slowing growth and elevated inflation.

Robust nominal growth has driven strong revenue growth across both consumer sectors. After decreasing 0.2% m/min July, nominal consumer spending increased at a monthly pace of 0.6% in both August and September. But these higher revenues have also come with higher costs, most notably in freight and wages. Profits in the consumer discretionary sector have also benefitted from healthy demand for hotels during the summer travel season, as well as record revenue growth at the auto companies.

Disappointing results from “big tech” have weighed on expectations, as profits were constrained by a stronger U.S. dollar, weakening demand for hardware, a decline in ad revenue, higher operating costs, and an increase in headcount. Moreover, many large technology companies continue to record losses on newer business ventures, placing further pressure on the bottom line. Looking ahead, in anticipation of softer demand, many management teams outlined plans to slow hiring and cut costs to protect profit margins. 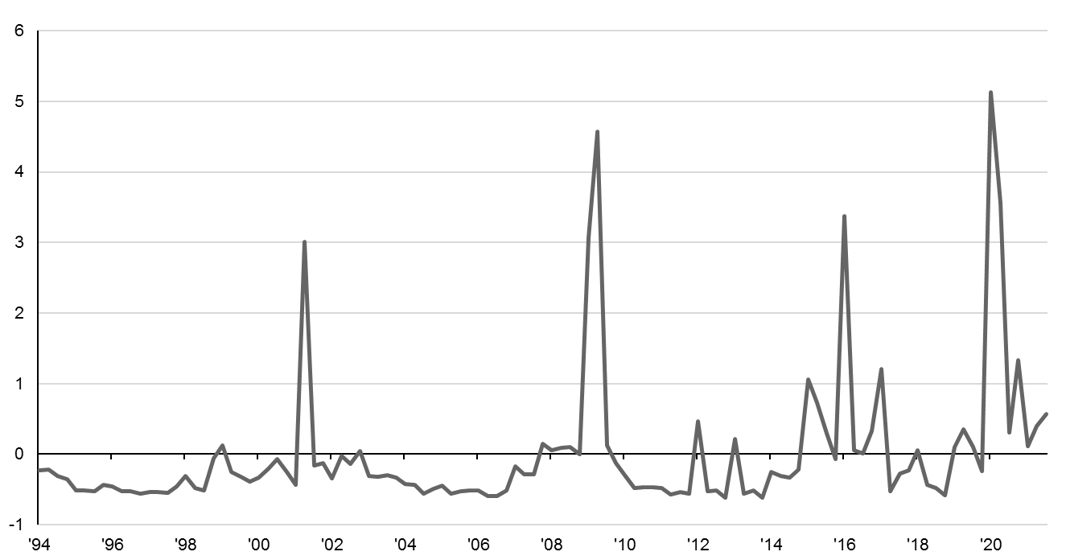 It’s all about pricing power

Pricing power has differentiated winners from losers in 2022, as rising costs, rather than deteriorating sales, have accounted for weakness in earnings. Businesses with pricing power today are generally those which provide essential goods and services, whereas businesses where results tend to be tied to final demand have struggled. Management commentary has constantly referenced the impact of higher freight and shipping costs, as well as higher rates and a stronger U.S. dollar - this is great if you’re a shipping company, but bad if you must pay the shipping company and are selling your goods and services all over the world.

Looking ahead to 2023, the ability to maintain pricing power while simultaneously managing costs will be the key; economic growth is projected to slow, meaning margins will remain under pressure. If recession is avoided next year, we would expect earnings growth to be close to zero. On the other hand, if the U.S. economy tips into recession, we would expect earnings to post a more sizable decline.

The question is then, what would a decline in profits look like if we have a recession? In answering this question, inflation is key. As shown in the chart below, corporate profit growth tends to peak alongside inflation; we expect that inflation will gradually subside next year, but in the interim, should remain positive and provide a tailwind for earnings. This thesis is further supported by the fact that the average decline in profits from 1968-1982 – a period of elevated inflation – was half that of what has been seen on average over the last 70 years.

Inflation and earnings tend to peak together

U.S. CPI, Corporate profits are represented by a market cap weighted basket of companies included in the S&P 500 since 1957, quarterly 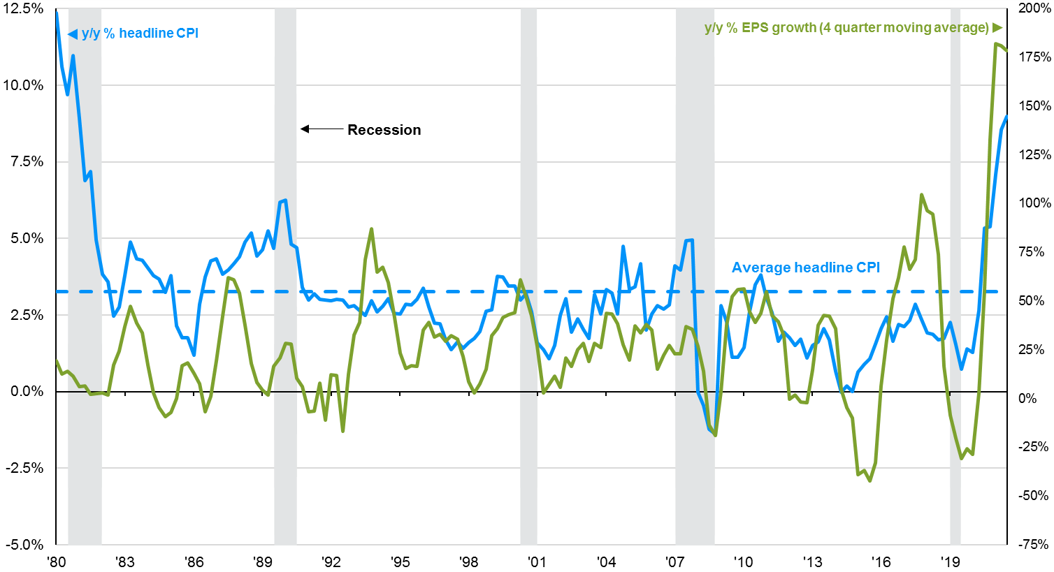 Demand will gradually fall prey to higher prices, which in turn will weigh on revenue growth. It is comforting, therefore, to see more management discussion of hiring freezes and layoffs, particularly in the service-oriented areas of the economy where pricing power is not quite as robust and wage growth is the strongest. We anticipate margins will decline, leading earnings growth to cool next year; what we struggle to see, however, is an outright collapse.

In an environment defined by slowing growth, persistent inflation, and rising interest rates, cash flow is king. We prefer companies who look able to defend margins – and therefore profitability – through a combination of expense management and pricing power. This leads us to opportunities in both growth and value; energy, industrials and consumer staples continue to look attractive, while technology companies have repriced to levels that suggest more attractive forward returns, particularly if long-term interest rates exhibit a significant decline in 2023.

At the end of the day, markets are forward looking and will begin pricing in a bounce in economic growth and profits before it shows up in the data. Since 1960, the unemployment rate has peaked an average of six months after the stock market has bottomed; we see no reason why this time would be different. With markets focused on recession and a potential easing in monetary policy, the key question will be how much softening the Fed will tolerate in the labor market before they begin to prioritize full employment over price stability.