A shot at a new beginning

Outside of the U.S., 2020 was also a year of endings and tentative new beginnings. The pandemic-induced social distancing measures ended a 10-year global expansion. While a recovery began in the third quarter, it has been uneven by sectors and regions so far. This will likely persist into the first quarter of 2021, as the world remains hostage to the twists and turns of the pandemic. The pandemic will continue to pressure spending on services more than goods and hurt countries outside of North Asia more than ones within the region, given less successful public health policies elsewhere.

However, as 2021 progresses the global economy has a shot at a true new beginning, with a more comprehensive recovery across sectors and regions than has been the case in 2020. As COVID-19 vaccines are distributed throughout the year, the global recovery should broaden and gain strength. In particular, economic growth should surge in the second half of the year, as pent-up demand is unleashed, particularly benefiting the services sector and regions outside of North Asia. In addition, a Biden administration implies greater foreign policy visibility going forward, putting less downward pressure on global trade than was the case during the last two years of the 2010s expansion. This should benefit exporters around the world such as Asia, Europe and Latin America. As a result, all major regions should see above-average growth in 2021 (Exhibit 1).

As services demand picks up throughout the year, services prices and overall inflation should normalize from still depressed levels. However, this should occur gradually, permitting major central banks around the world to keep policy accommodative. As 2021 comes to a close, we may see some emerging market (EM) central banks begin to raise rates, but developed countries like Europe and Japan will likely maintain short-term rates at or below zero for years to come. With regard to fiscal policy, we may see more differentiation in 2021 between countries that have limited fiscal space and those that have deep pockets. Indebted EM countries may start implementing fiscal austerity measures in order to prevent a revolt from investors, restraining the recovery in a region like LATAM. On the other hand, Europe and Japan have the opportunity to take advantage of low rates to provide more fiscal support. In fact, eurozone countries have already suspended their fiscal constraints for 2021, leaving the door open to as much support as needed.

Source: IMF, J.P. Morgan Asset Management. Last cycle defined as the average of the period from 2010 to 2019. Europe refers to the European Union. Data are as of November 30, 2020.

Thinking beyond the aftermath of COVID-19, the global economy has a shot at a more diversified new cycle ahead. The last one was characterized by U.S. growth outperformance versus the rest of the world, as the U.S. economy resolved the imbalances that led to the Global Financial Crisis (GFC) and moved on. Other regions, meanwhile, had additional imbalances to deal with post-GFC, like the sovereign debt crisis in Europe and the deflating of the commodity bubble in emerging markets. This time around, the world is entering this new cycle on more even footing. In fact, there was a silver lining of the pandemic for Europe: a closer fiscal union with the agreement on a European Recovery Fund. In addition, emerging markets are now less susceptible to booms and busts related to China, as the country continues to transition to higher quality, less leverage-driven growth.

As a result, this new cycle should be characterized by a lower U.S. dollar (Exhibit 2), a process that has begun as 2020 comes to a close, but that has further room to run in the year ahead and beyond. This dynamic should be beneficial for U.S.-based investors investing in international assets. 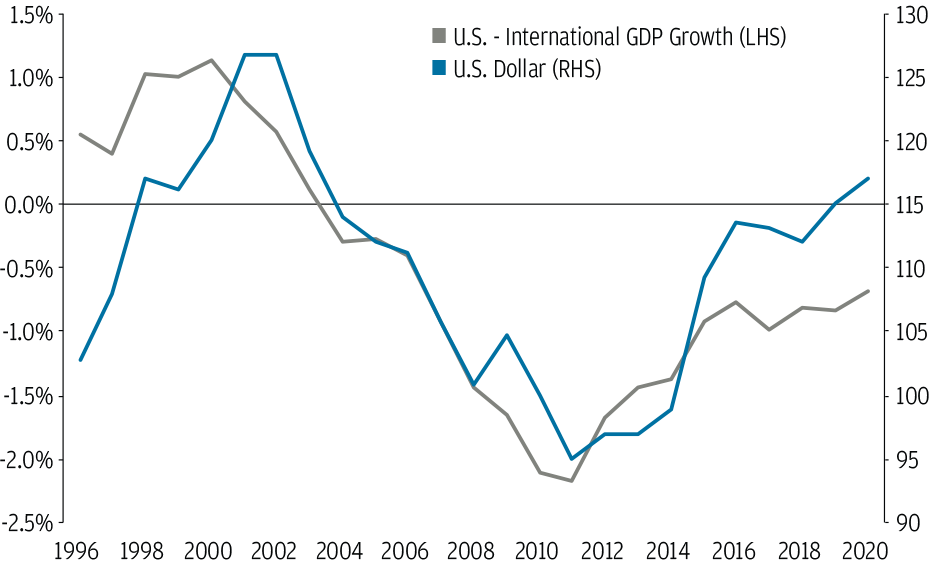