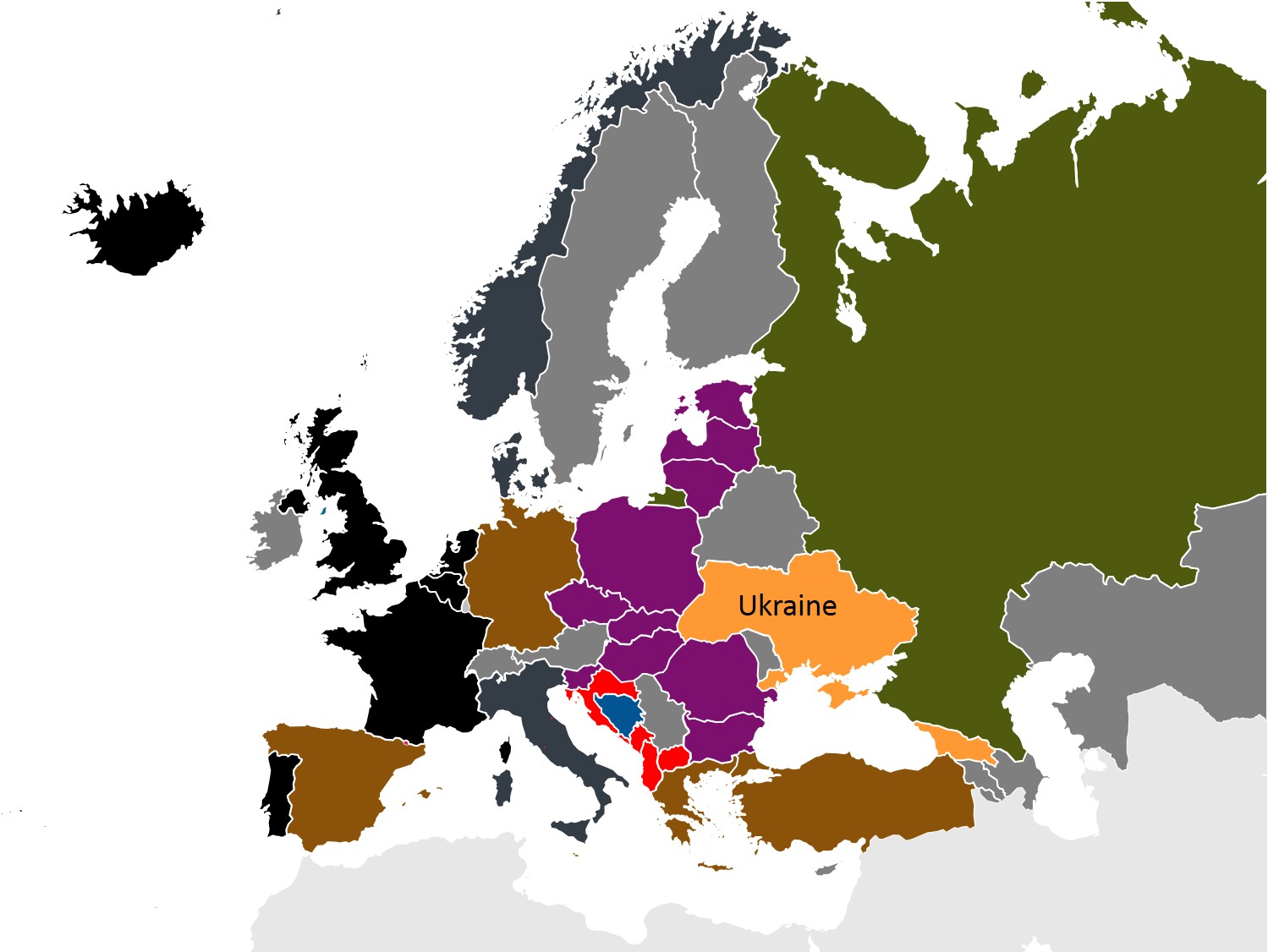 Global markets have had to digest a lot of bad news in a very short period:

This is a lot for markets to digest in a short period; YTD, global equity indices are down 3%-10% and most global fixed income indices are down 3%-4%. In this note, we examine market risk unwind measures, the likely ability of corporate revenues to keep pace with rising input costs, an update on supply chains, my shrinking network of trusted research contacts and some thoughts on the Ukraine and the road not taken. 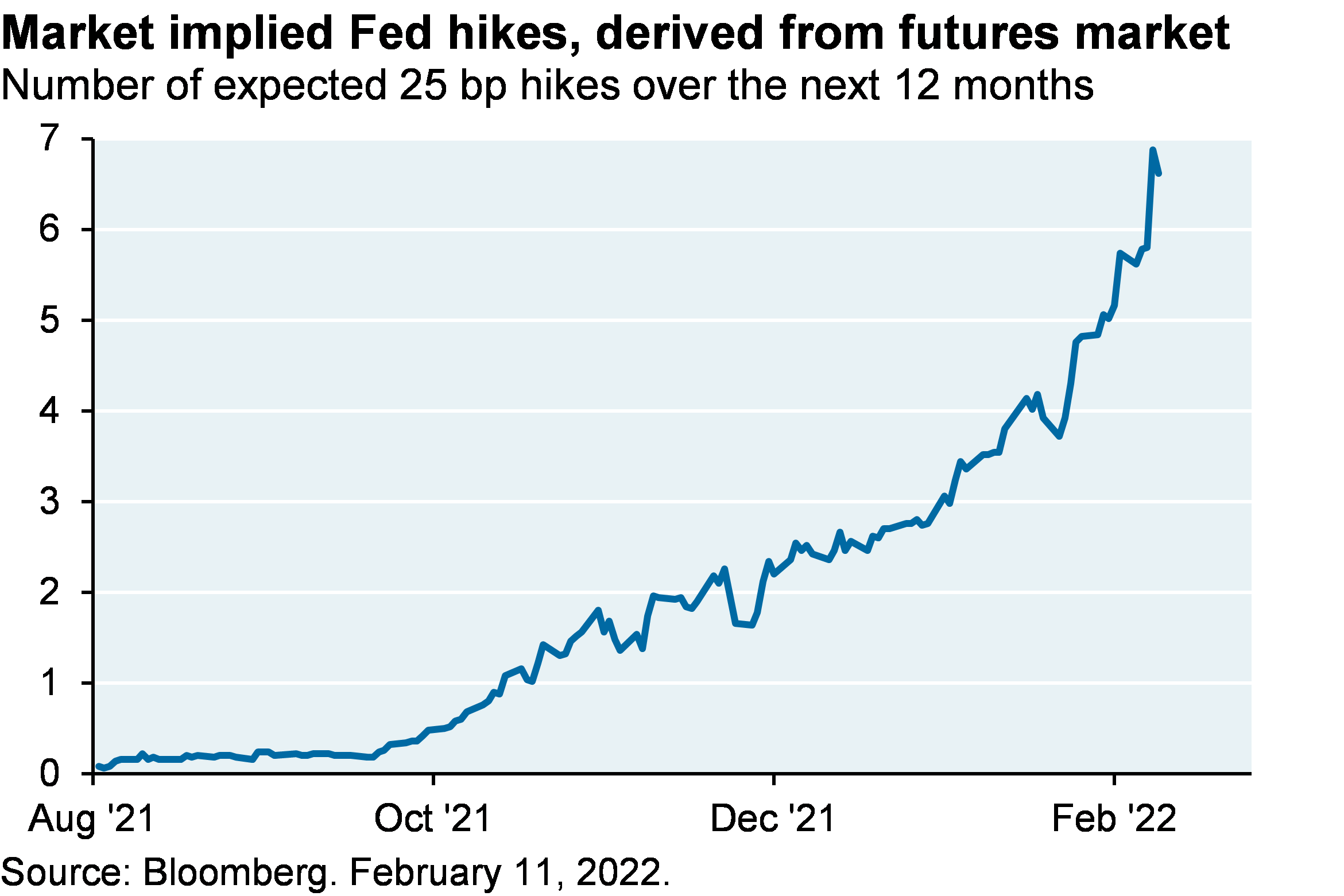 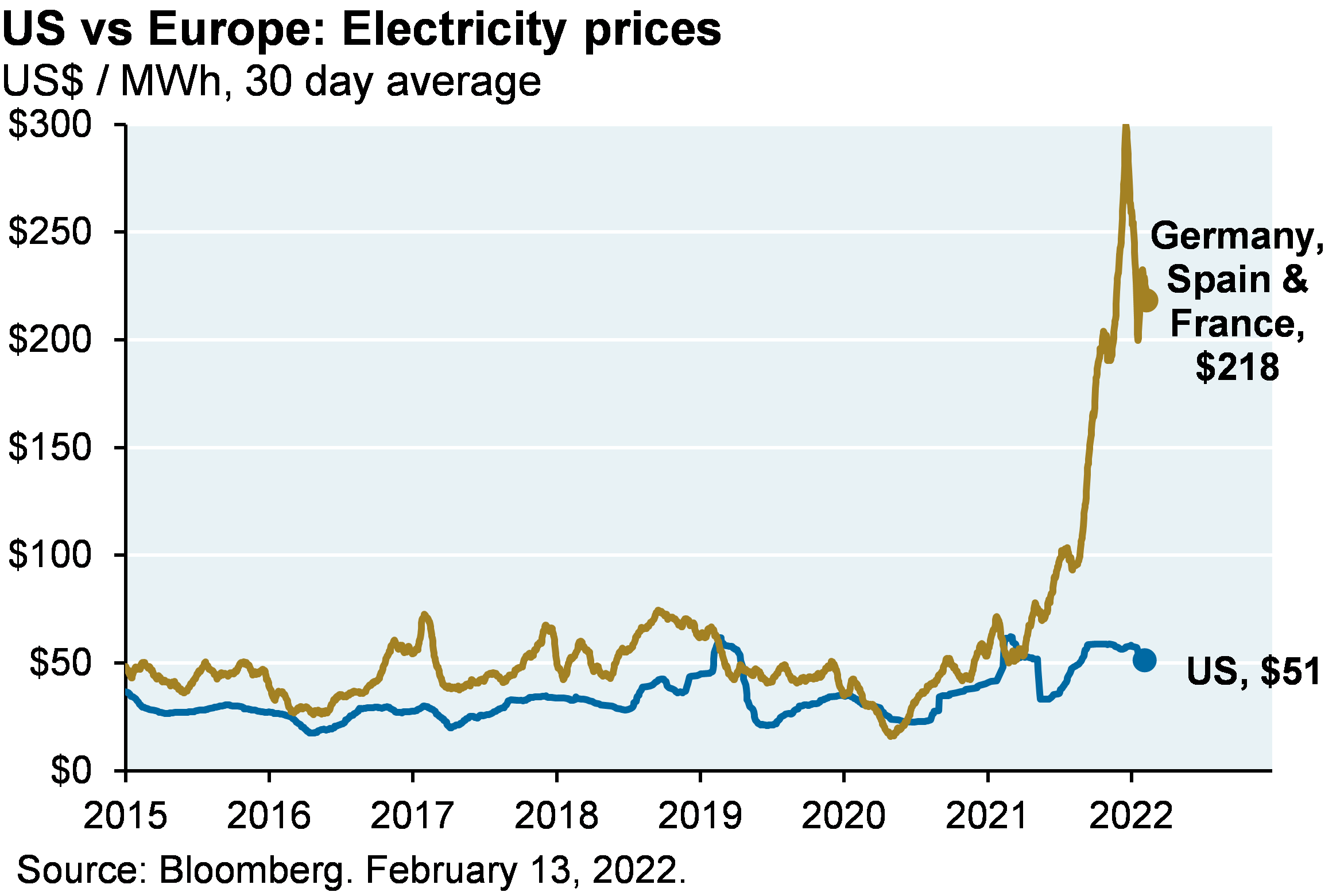 If you missed it, we published a piece on cryptocurrencies and blockchains called the “Maltese Falcoin” on February 3. Press reactions focused almost solely on the store of value topic and not on the arguably more interesting question of whether widely discussed use cases for blockchains will end up being satisfied by stablecoins (perhaps issued by Central Banks), and by permissioned, private blockchains that also have little to no implications for directional crypto valuations. Since our piece came out: the SEC is reportedly negotiating a $100 million fine with DeFi lender BlockFi for selling unregistered securities to customers, and there’s more evidence that NFT buyers may be able to transact with fiat currency instead of having to buy Ethereum tokens.

Let’s start with some risk unwind measures. The first chart shows an estimate from JP Morgan Global Market Strategy Research on the large overweight position that investors hold in credit that built up over the last decade3. This can be laid at the doorstep of the Fed for engineering the longest period of negative real rates since the 1860’s. Unfortunately, the unwind of the credit overweight has a long way to go.
The equity repricing is further along. The second chart shows the decline in stocks heavily owned by retail investors, whose returns are now converging back to the S&P 500. As for the S&P, its forward P/E valuations have declined from peak levels along negative 10 year real interest rates; although to be clear, valuations are still high in any historical context. The fourth chart shows something even more striking: the average stock in the NASDAQ is now down 42% from its peak, with many down 70% or more. The fifth chart shows other low water marks: I’m unsurprised that the SPAC market and its gaggle of adversely selected IPOs marked the beginning of the end for overpriced stocks, and for repricing of renewable and fintech stocks as well.
If we do get a 50 bps Fed hike in March and some additional equity market capitulation, that could represent an attractive equity market entry point. We’re getting closer to one now even without that. 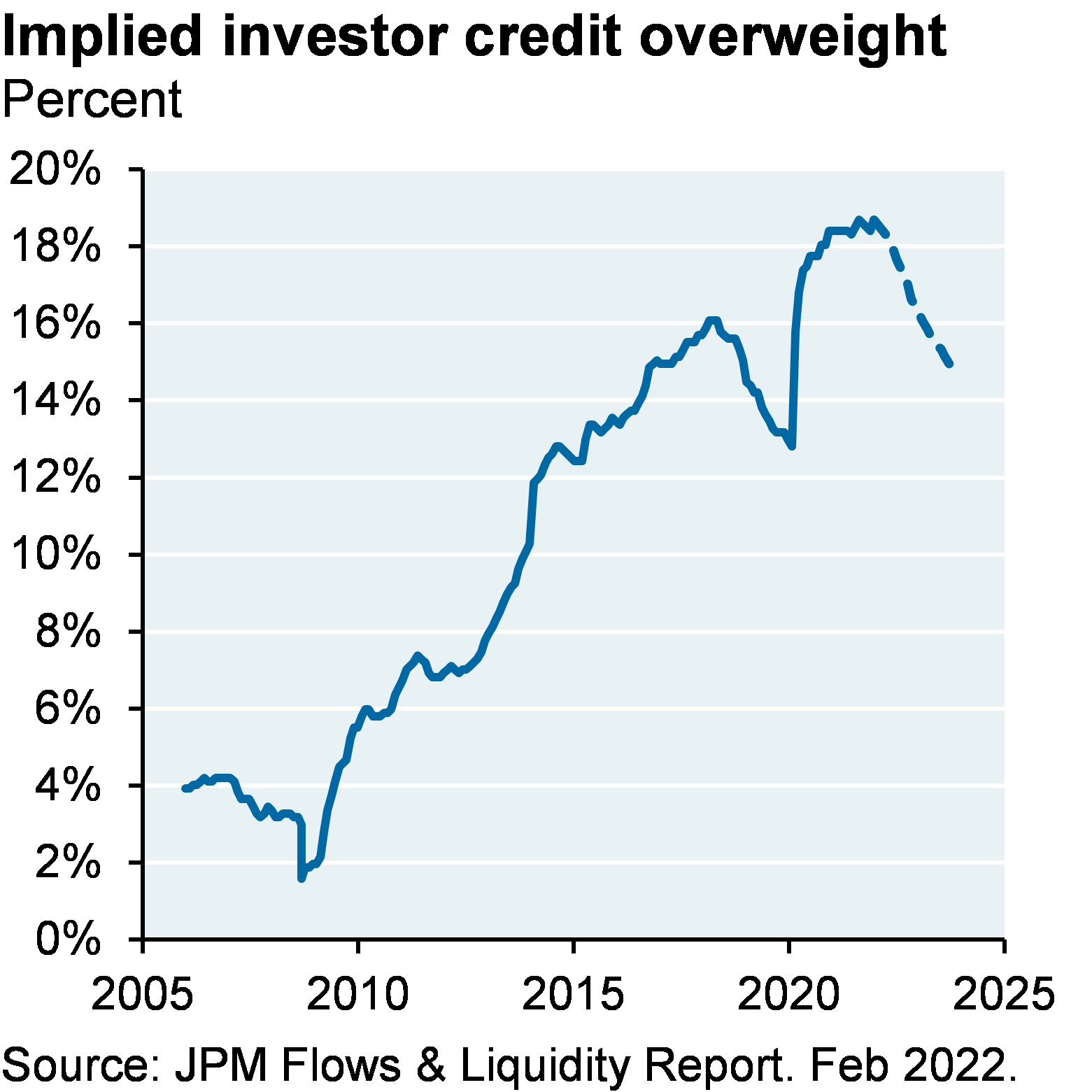 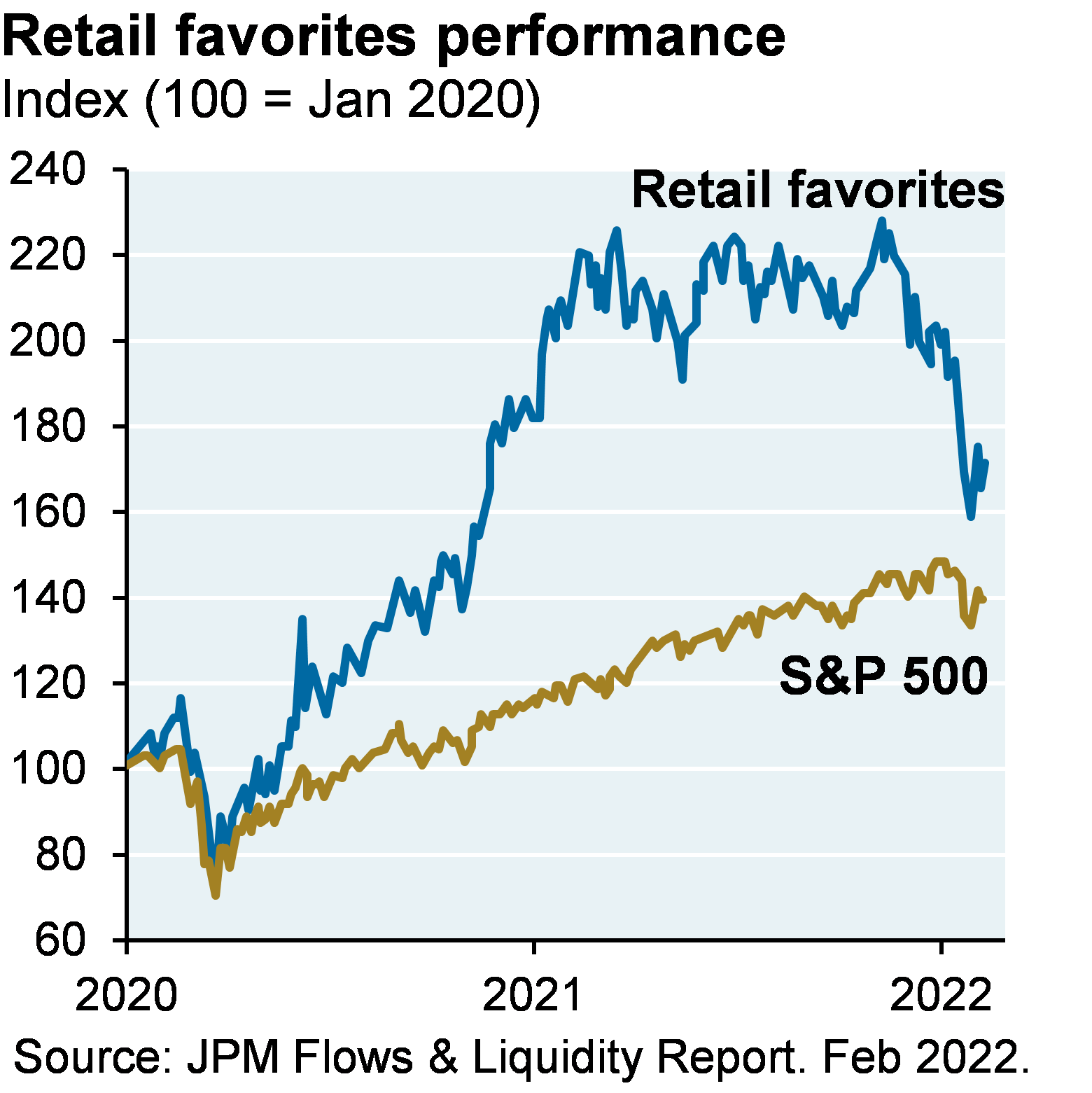 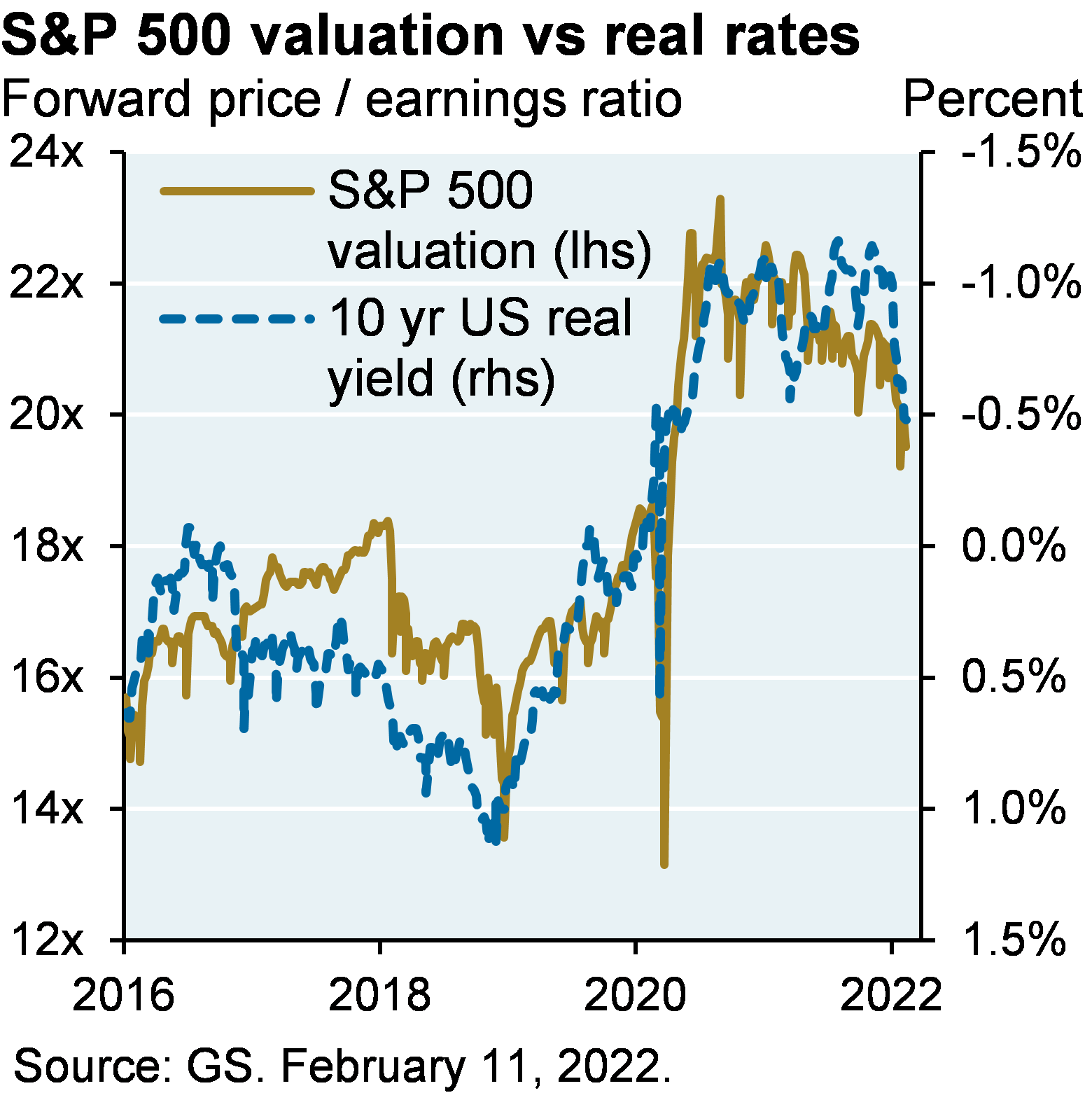 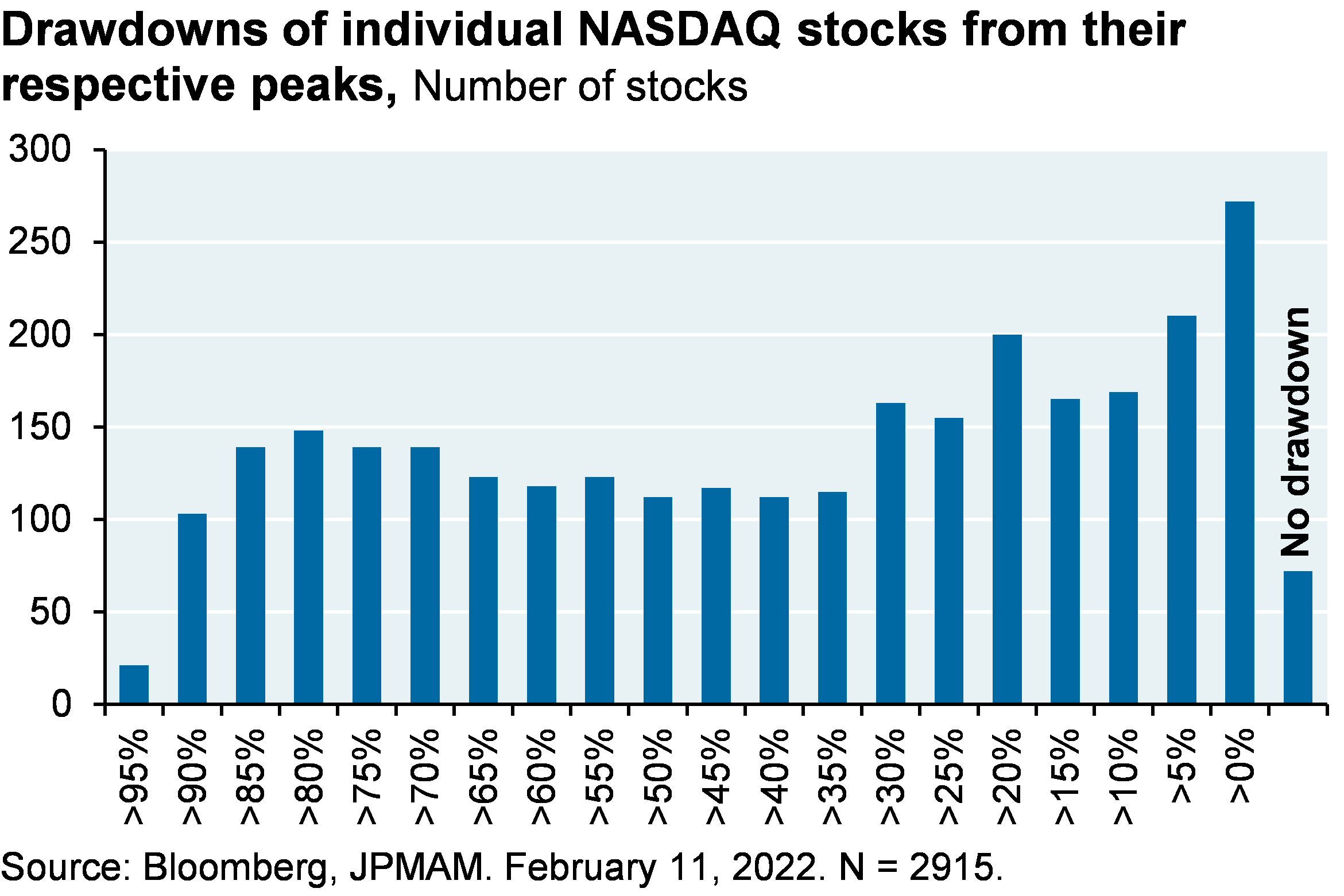 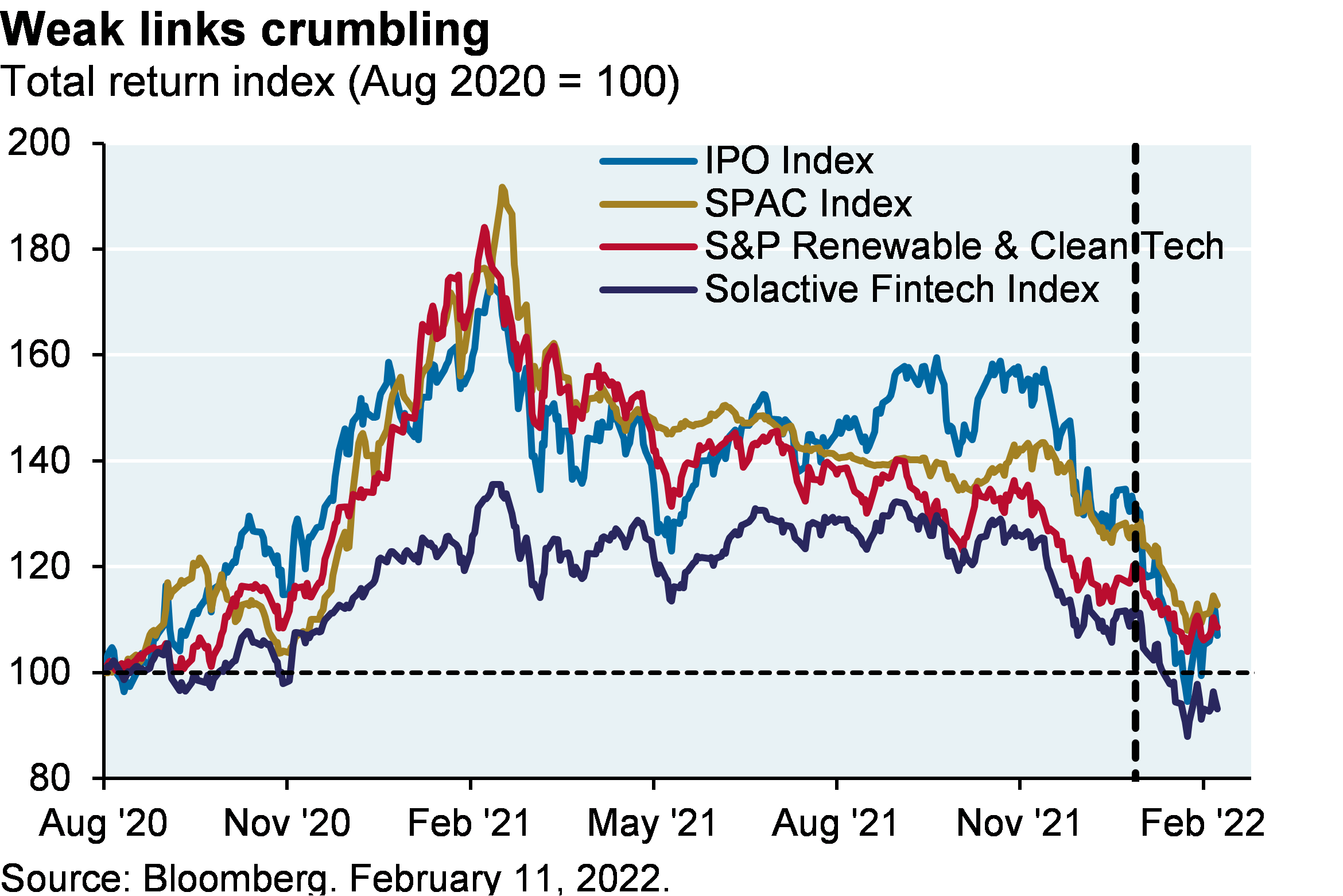 The good news for investors: the impact of rising input costs on profits may be overstated. As shown below in some interesting work from Empirical Research, there is almost a 1:1 connection between rising costs of goods sold (which includes most labor costs) and rising revenues over the last 70 years. The link between rising SG&A expenses and revenues is strong as well, although not as tight as the link with COGS. What does this all mean? Rising costs by themselves do not result in lower margins and poor equity market returns; from 1987 to 2022, equity market returns were almost identical regardless of the level of median wage growth4.
The more important question is whether a recession is coming, which is way more predictive of a deeper sustained rout in equity markets. And on that front, I do not see a recession in the cards for 2022. I still think US real GDP growth will be ~3% this year as production rises to match higher levels of consumption. The latest capital spending surveys still point in this direction. 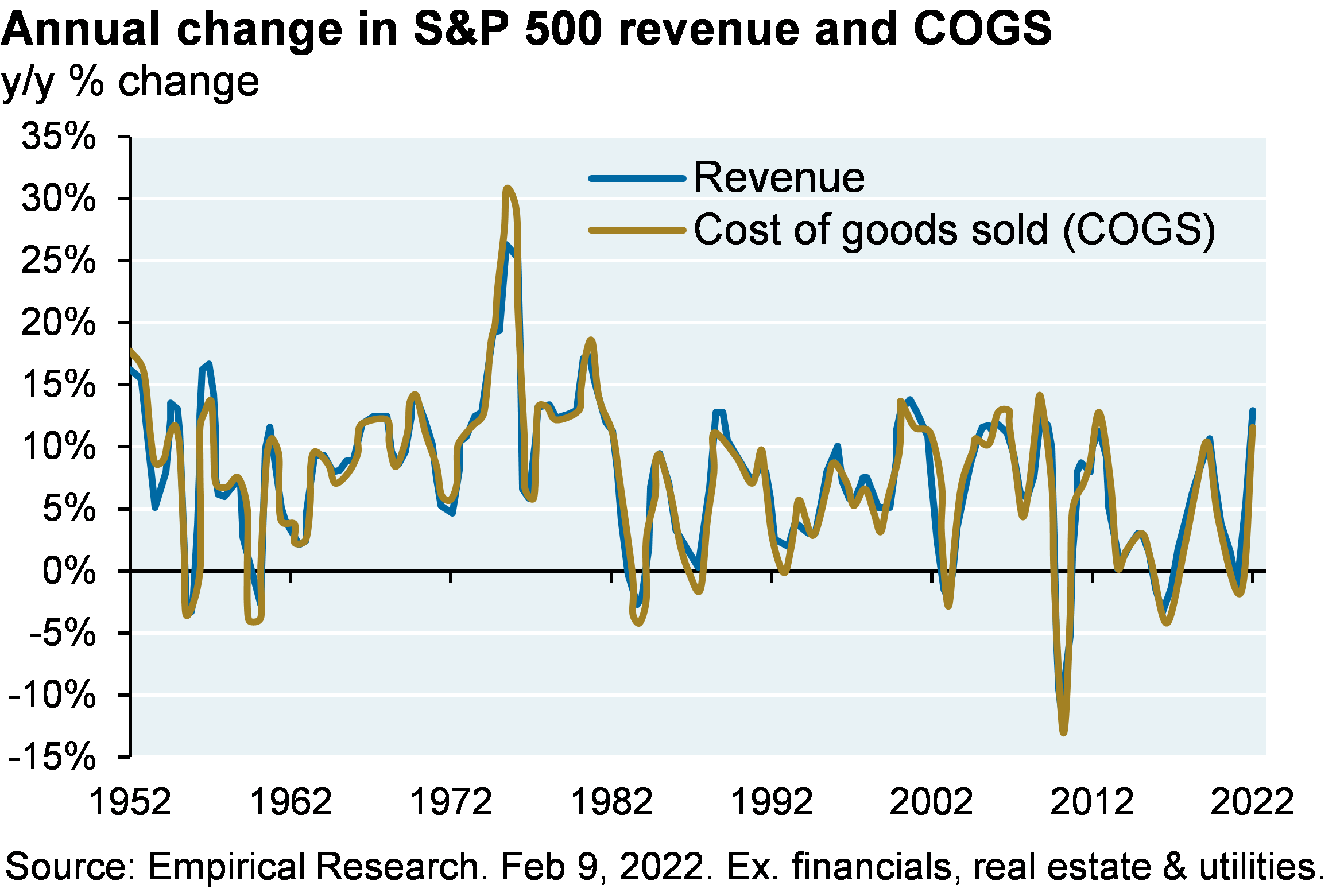 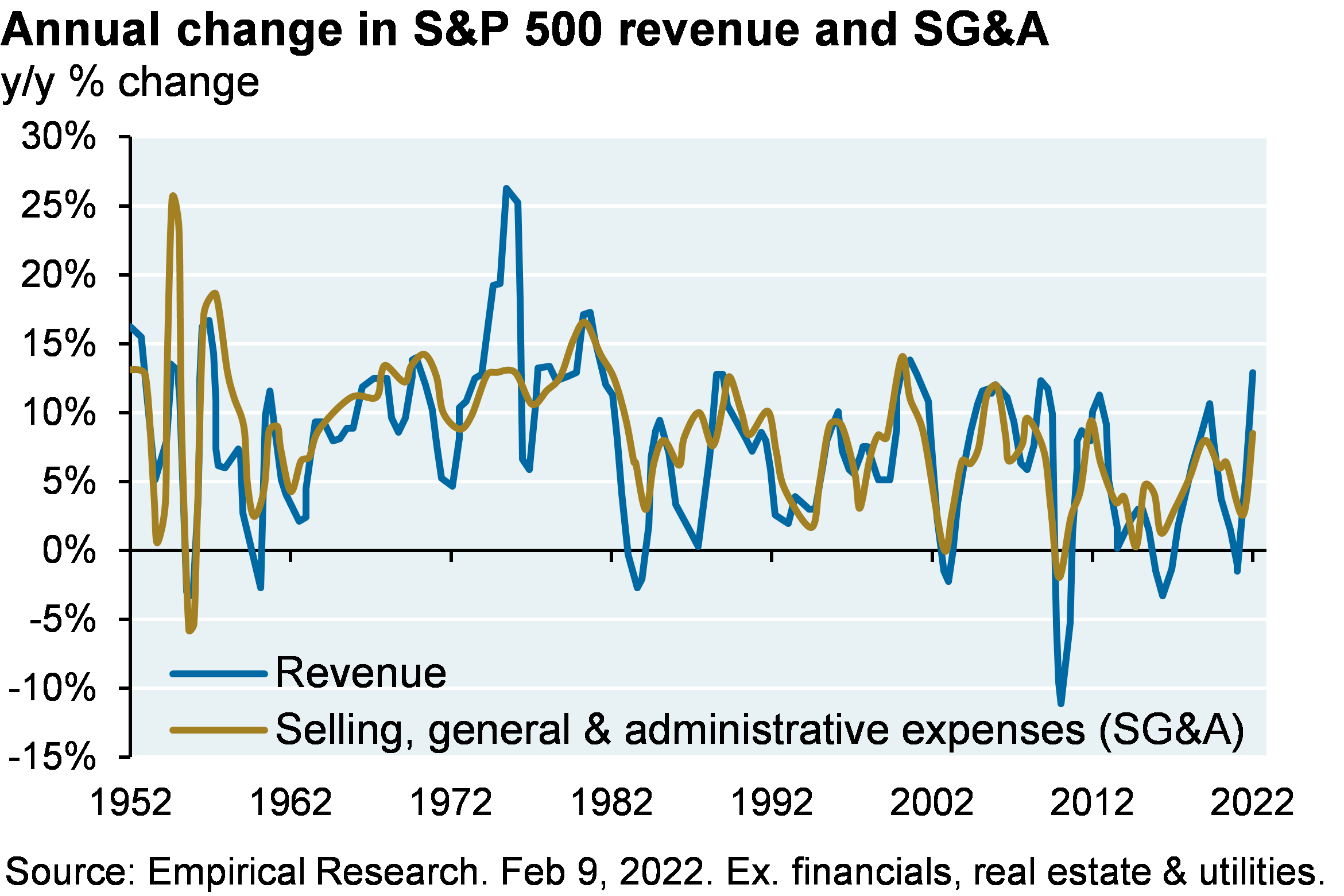 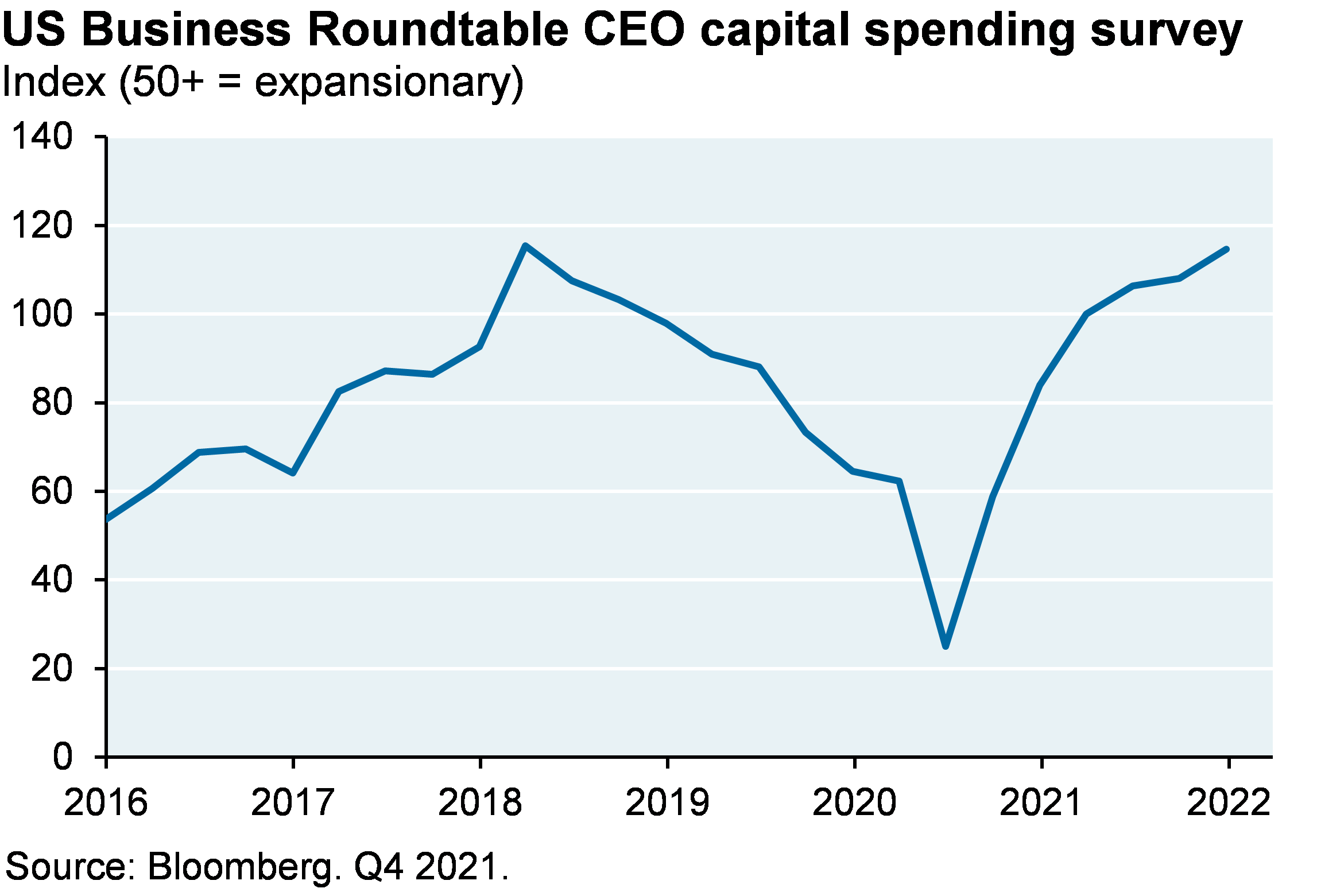 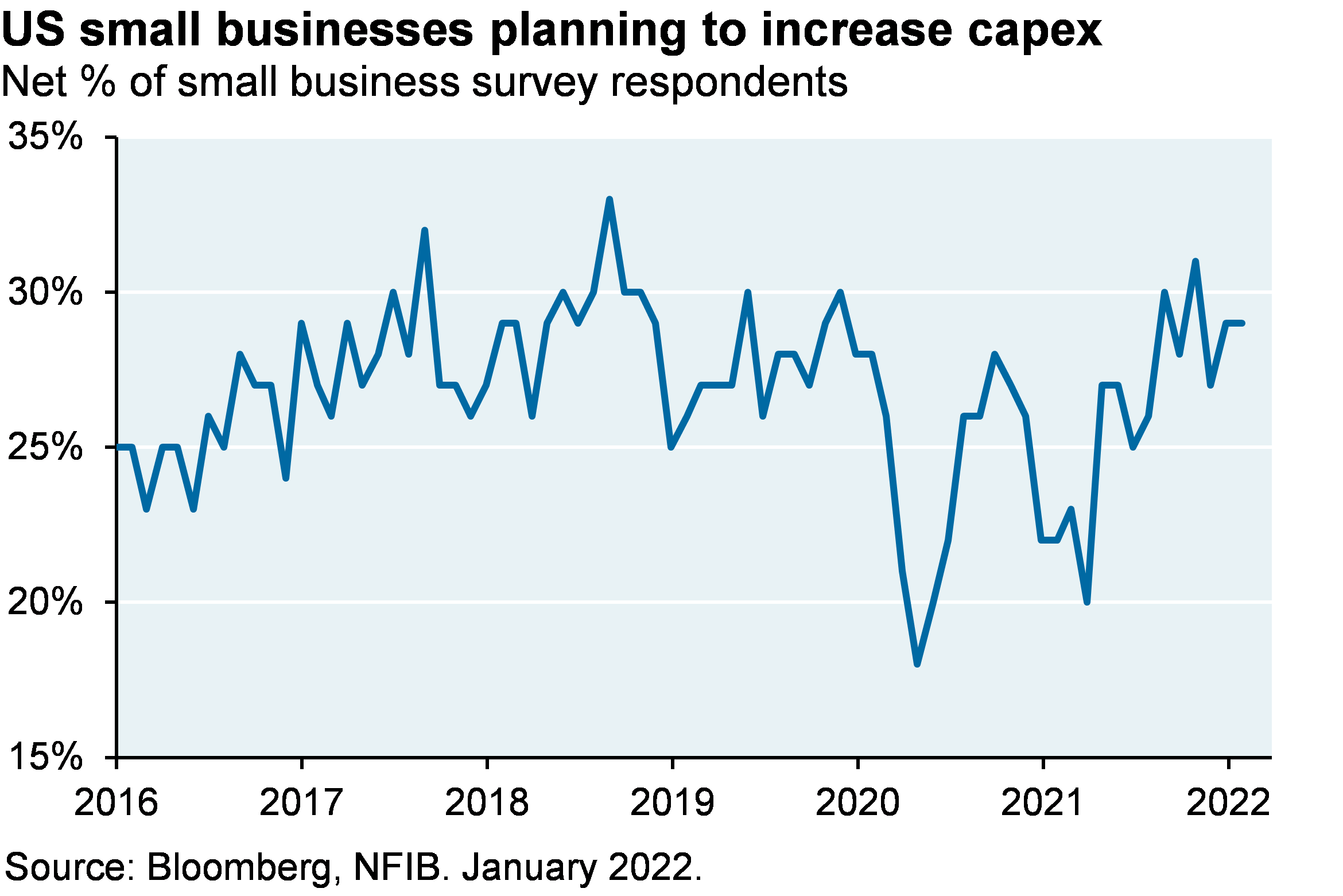 Obviously, a Ukraine invasion could interrupt a capital spending recovery and destabilize markets. A lot would depend on what sanctions are adopted. Here are the kind of sanctions reportedly contemplated by the US:

The full imposition of this list could be very disruptive for markets, at least in the short term, given likely Russian retaliation via energy supplies. I’m dubious of Europe’s ability to withstand a protracted two-sided sanctions and trade war with Russia given its energy dependence cited earlier.

On the Ukraine itself, last weekend I reread John Mearsheimer’s essay from 2014 in Foreign Affairs magazine, entitled “Why the Ukraine Crisis Is the West’s Fault: The Liberal Delusions That Provoked Putin” 5. The piece reviews how we got here and what policy options might have been chosen instead.

The story begins with the Clinton Administration’s NATO enlargement in the 1990’s, an expansion of more territory than French, German and Italian land mass combined. Mearsheimer cites George Kennan, an architect of the US post-war policy of Soviet containment, on NATO’s enlargement in 1998: “I think the Russians will gradually react quite adversely and it will affect their policies. I think it’s a tragic mistake. There was no reason for this whatsoever. No one was threatening anyone else”. Ten years later in 2008, NATO leaders announced that “Georgia and Ukraine would become members of NATO”. The Russians made clear at the time that red lines had been crossed, which the US and Europeans mostly ignored. In 2013, the president of a US-bankrolled organization working in the Ukraine to draw it into the Western orbit wrote in the Washington Post, “Ukraine’s choice to join Europe will accelerate the demise of the ideology of Russian imperialism that Putin represents. Russians, too, face a choice, and Putin may find himself on the losing end not just abroad but within Russia itself.” These predictions have not aged well.

Since the 1990’s, there has been a battle between Liberalism and Realism in Western foreign policy circles on the Ukraine. Depending upon what happens now to the Ukraine, which the West has made clear it will not defend militarily6, the Realists might turn out to be right. That’s why Mearsheimer concluded in his essay that some sort of “Finlandization” of the Ukraine would be a better outcome for all sides. 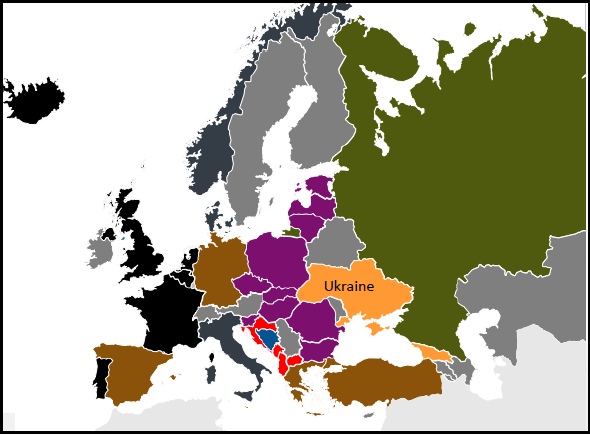 Invasion of the COVID Body Snatchers: another one bites the dust

What should I do when a research firm whose work I respect, value and pay for ventures into irresponsible and poorly vetted COVID commentary? Like the 1956 film Invasion of the Body Snatchers, seemingly normal individuals start behaving strangely and all of a sudden, they become pod people. The latest episode involves a firm whose work I often cite. In a recent public note and email exchange, one of its principal authors argued the following:

[A] COVID vaccines may not work that well. Yes, data from health agencies across the developed world show much higher hospitalization, ICU and mortality outcomes for unvaccinated people. But this data is unreliable, mostly since unvaccinated cohorts are not comparable to vaccinated ones. Why? A large number of unvaccinated people are frail, sicker individuals with cancer and heart conditions that prevent them from being vaccinated even if they want to be!

[C] Why are COVID mortality rates so much higher in the developed world than in the developing world whose vaccination rates are so much lower? Another sign that COVID vaccines don’t work well!

So, what will I do with their research now? I will still read it since their work is generally good. That said, my prior unquestioned confidence in their work is gone, and I will do a lot more checking and verifying. As for any personal relationships with their researchers, those might be gone too. mRNA vaccines are estimated to have saved one million lives in the US in 20219, and I trust the people who work on such estimates a lot more than people creating their own narratives as they go along. As I get older, my personal world is shrinking. I distance myself from people on the far right and the far left, and now I distance myself from people who use stylized pseudo-facts and sloppy research to push a given agenda. Life is too short for that.
Michael Cembalest
JP Morgan Asset Management

In many countries, strained healthcare systems are unable to accurately track COVID deaths. More than 100 countries do not collect reliable statistics on expected or actual deaths at all, or do not release them in a timely manner. Some demographers estimate COVID deaths by looking at deaths from all causes vs trend, rather than just at reported COVID deaths. The first chart compares the two; the farther above the line a country is, the more its excess deaths in 2020 exceeded reported COVID deaths. Many of the highest outliers are EM countries.
The second set of charts shows estimates of COVID mortality derived from a machine learning model. Again, estimated COVID death levels for lower middle income countries are much higher than reported ones, despite the fact that many of these countries have average population ages that are far below US and European levels (a key factor affecting COVID mortality). No approach is perfect, and demographers argue over models; but they all agree that developing country COVID deaths are massively underreported. So if you ask why the EM world has much lower death rates despite less vaccination, all that shows is a lack of understanding of basic pandemic research, even now two full years after the pandemic began.

Bottom line: if you ask why the EM world has had lower death rates despite less vaccination, all that shows is a lack of understanding of basic pandemic research, even now two full years after the pandemic began. 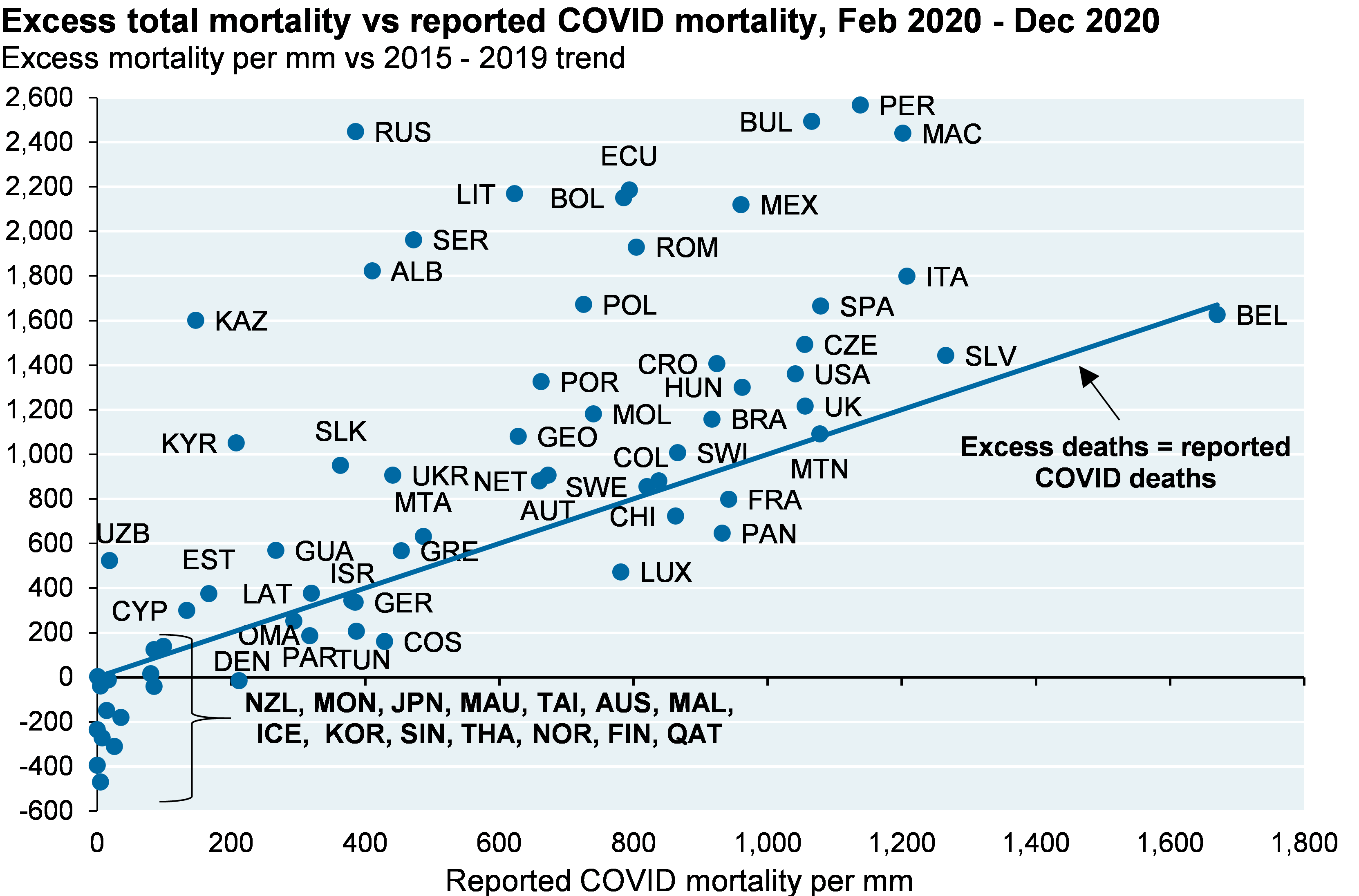 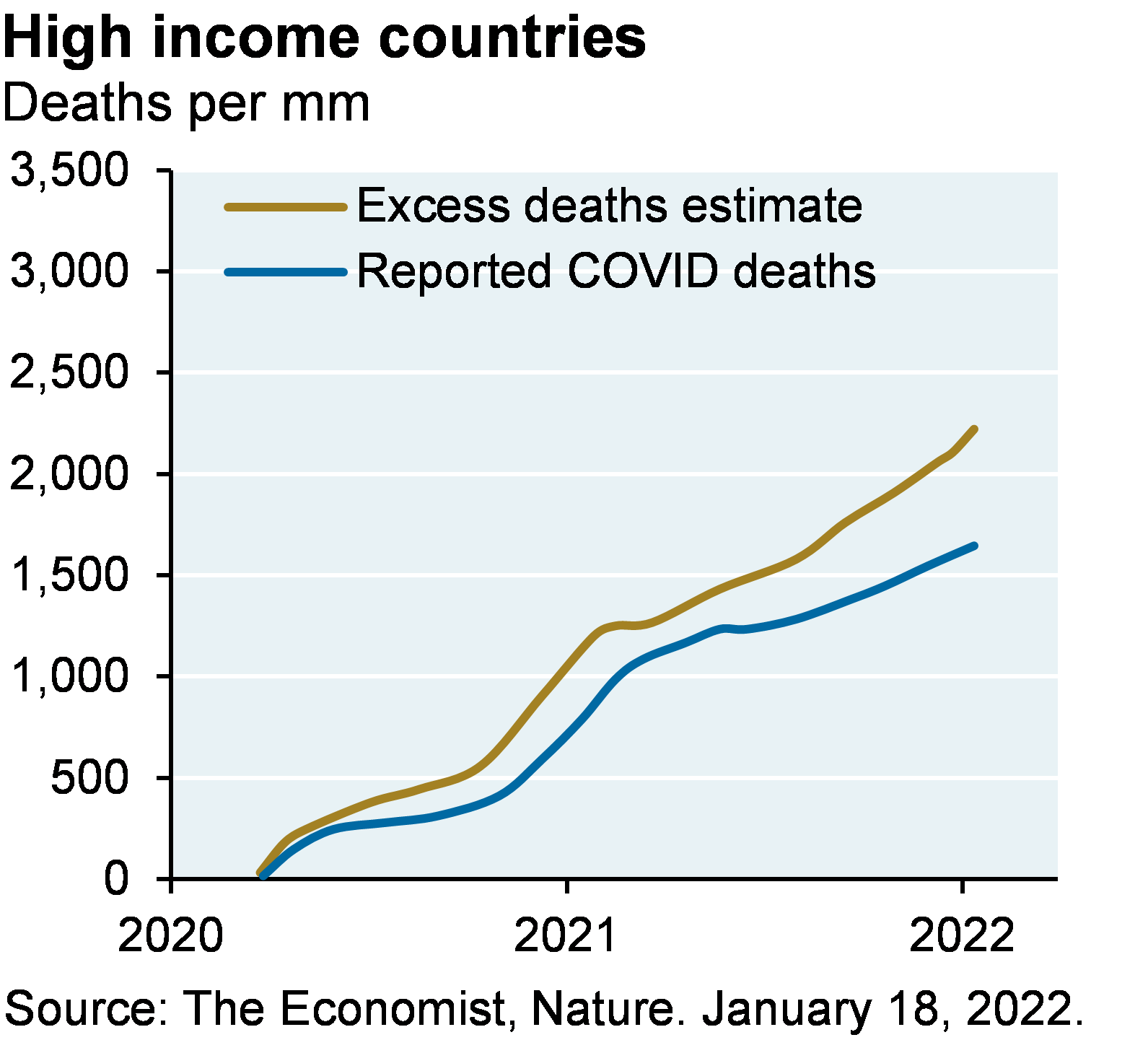 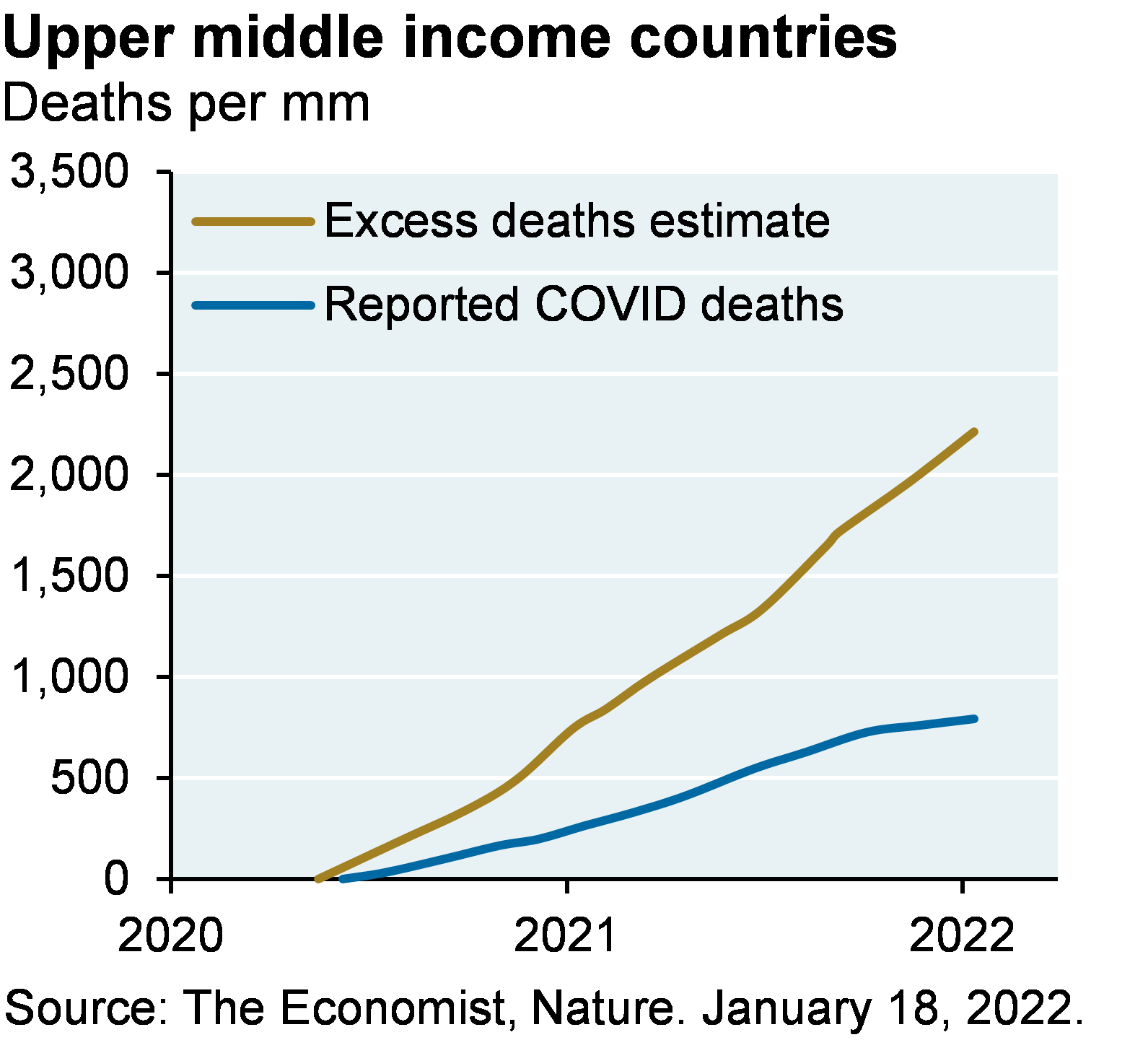 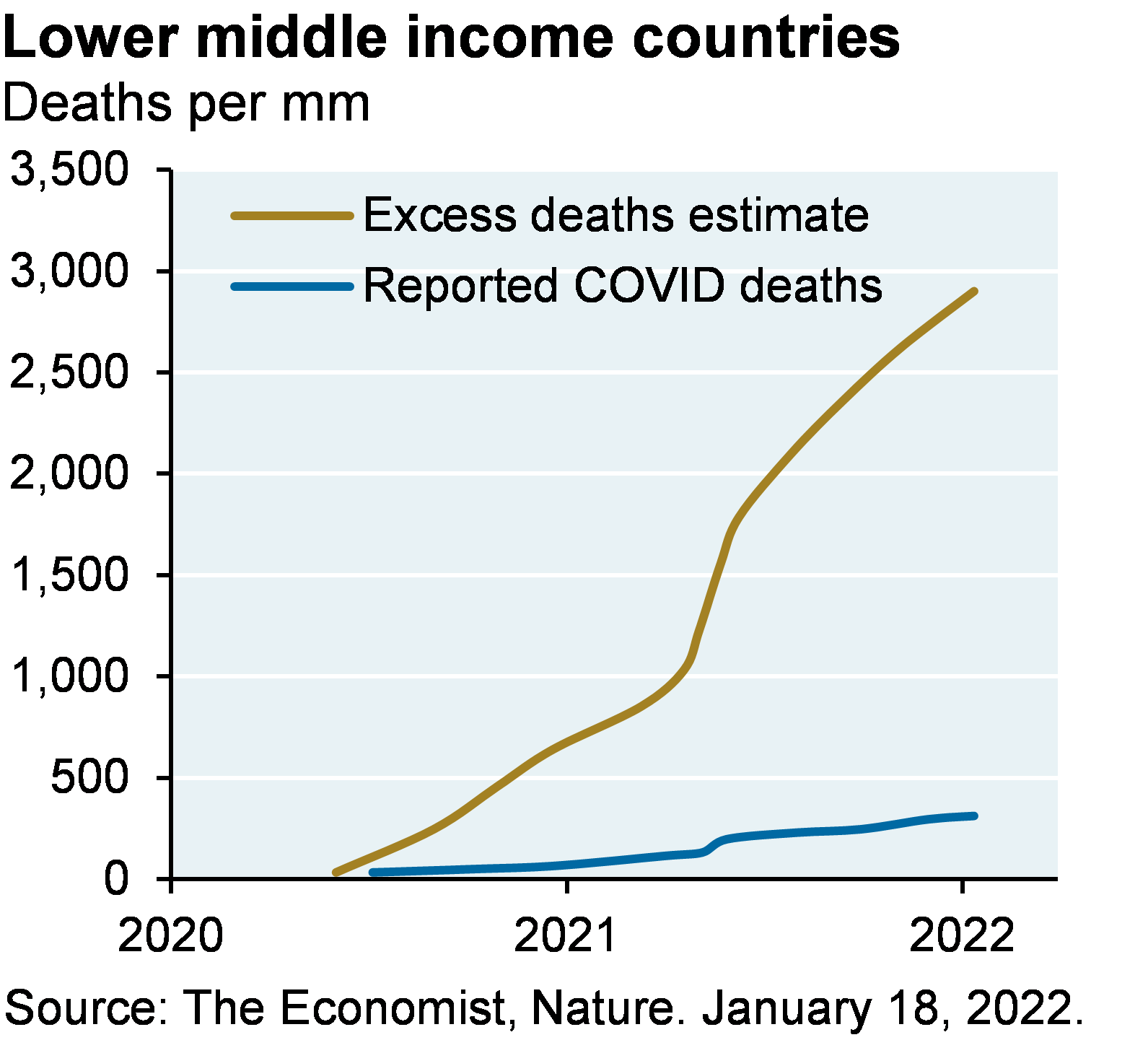 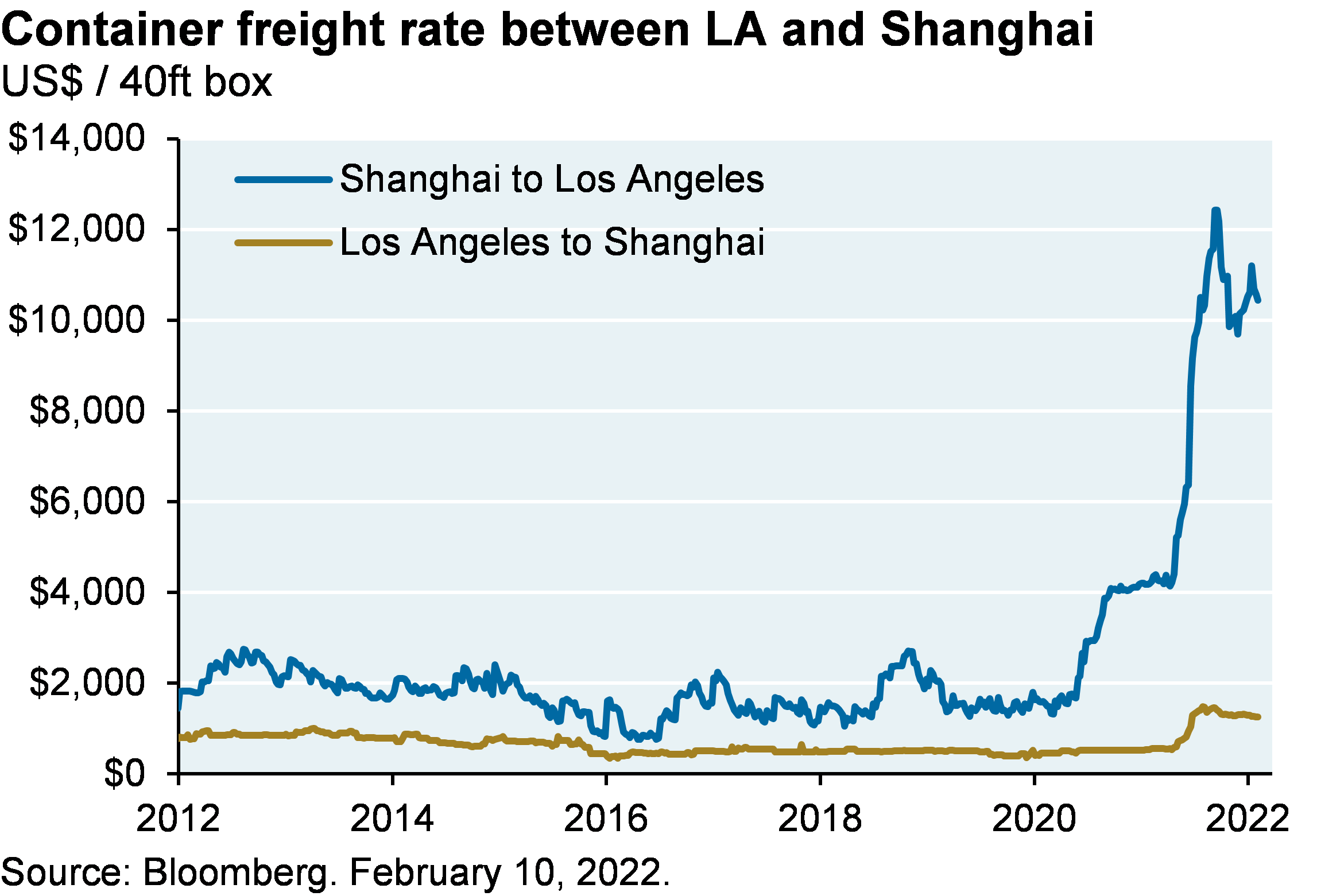 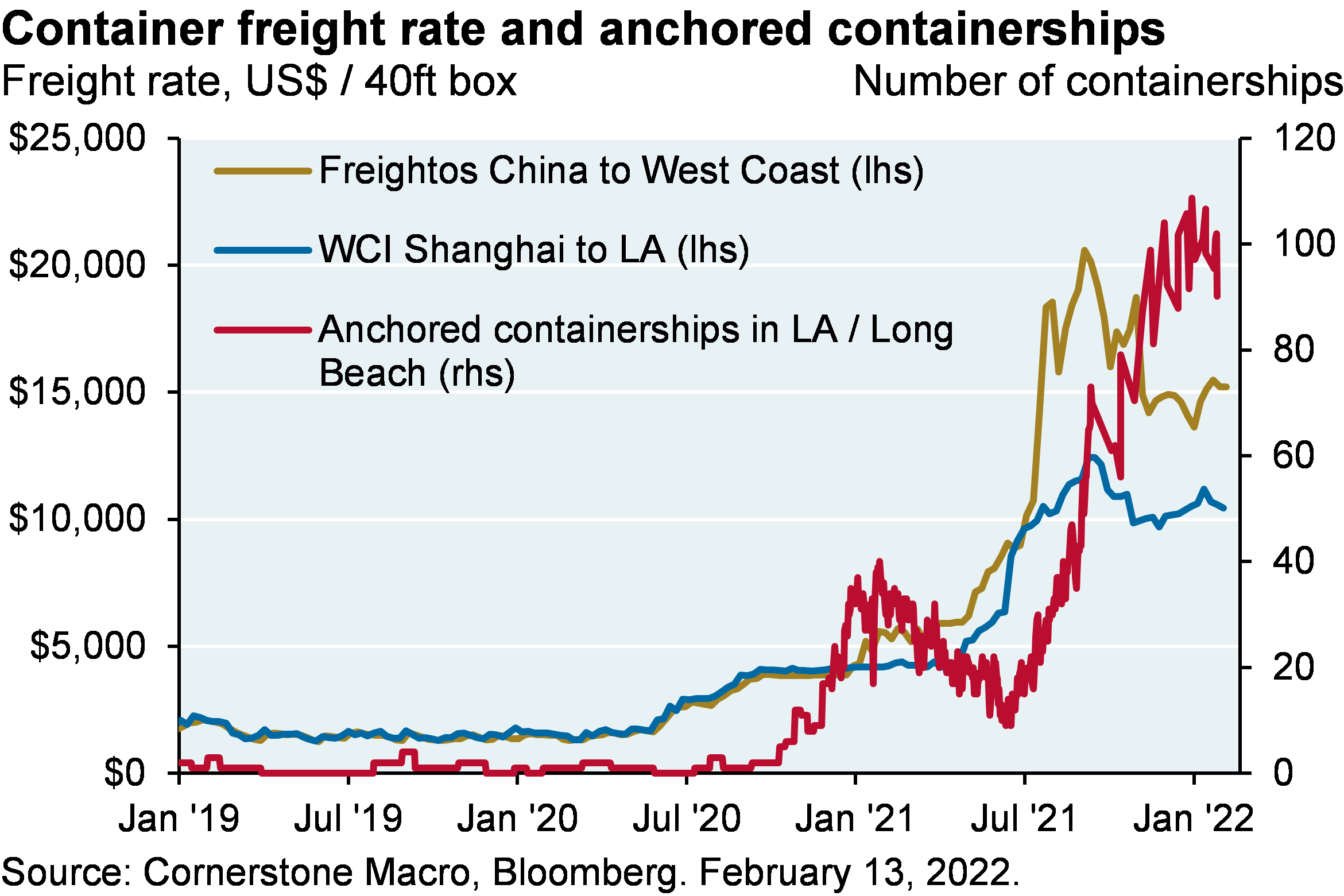 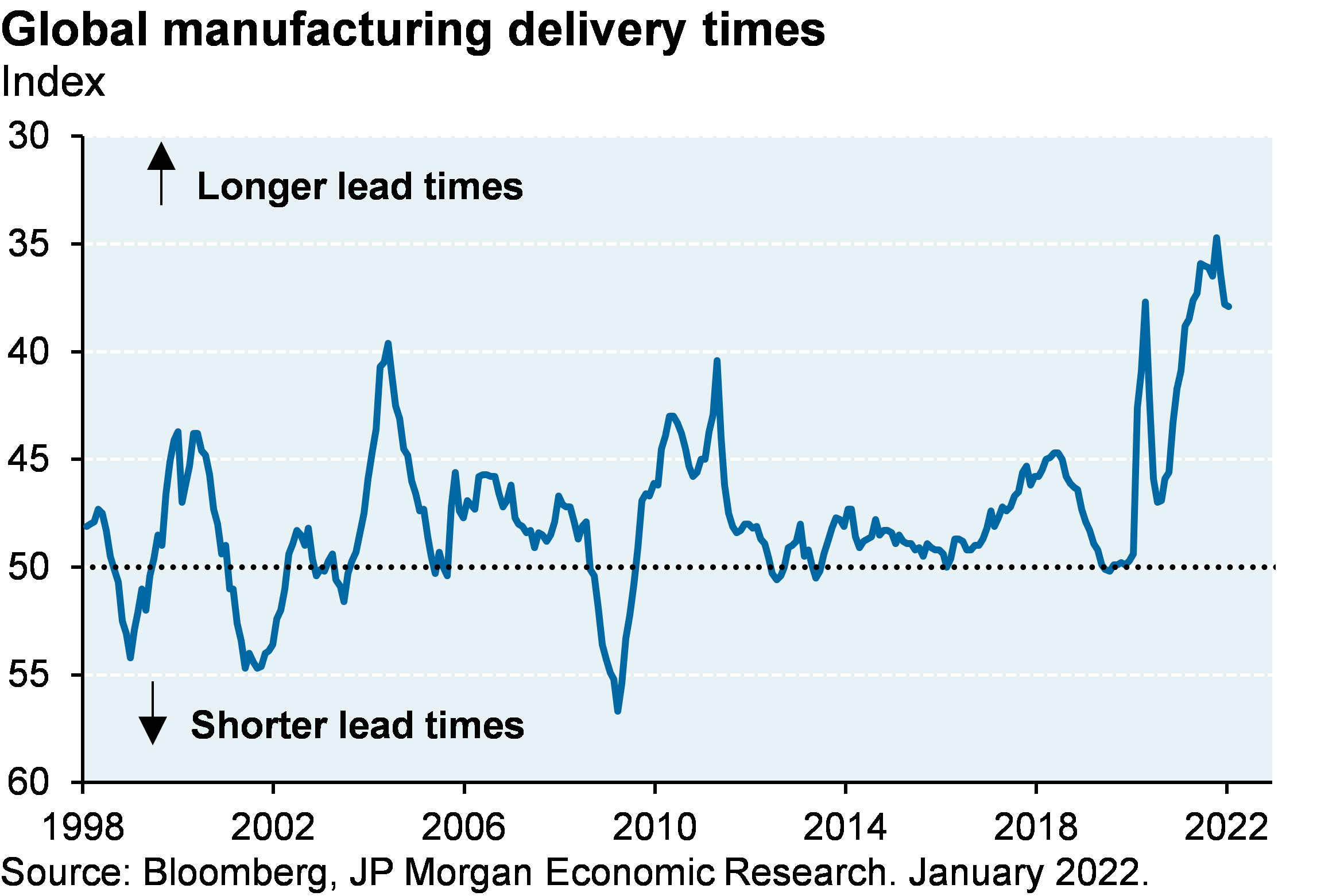 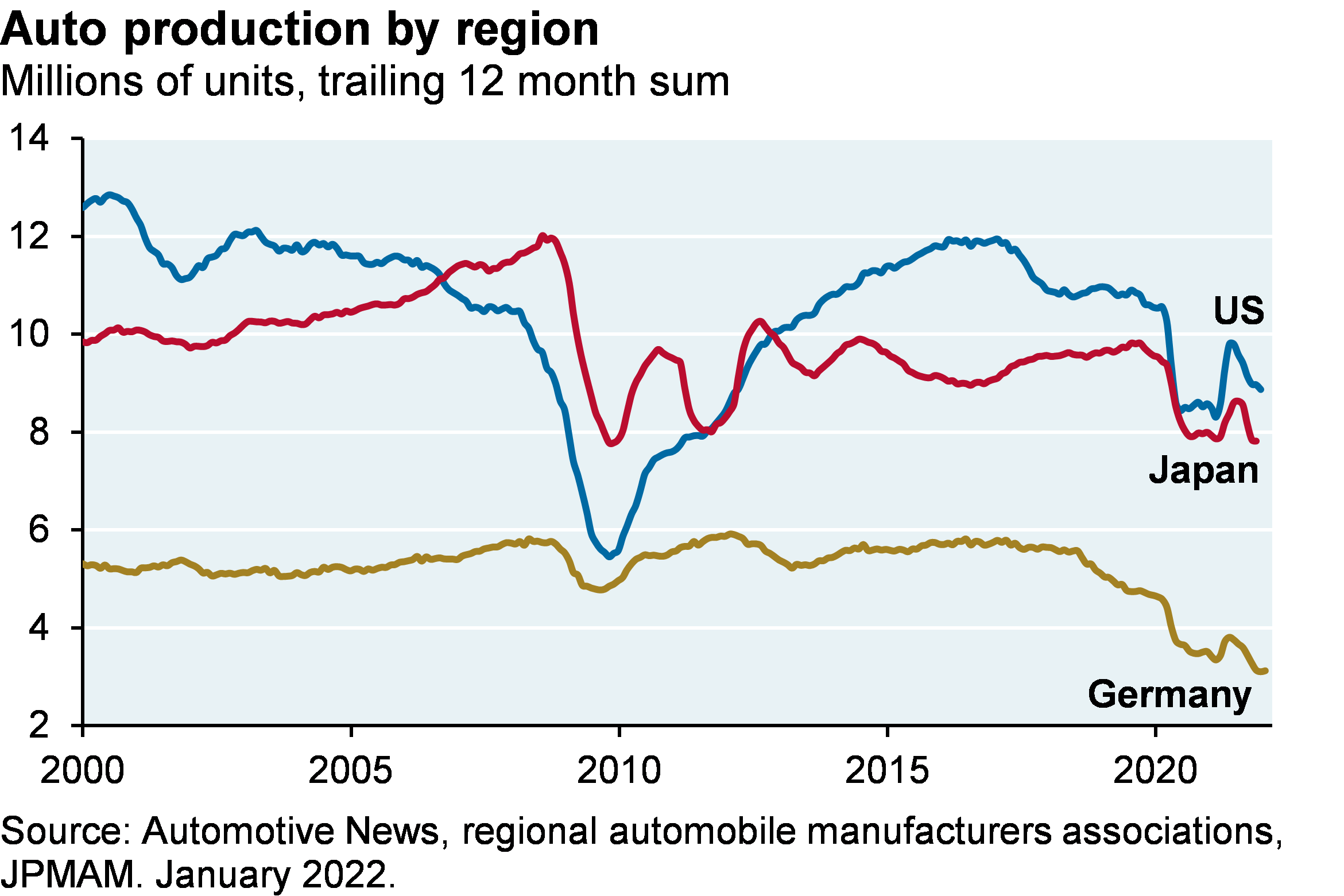 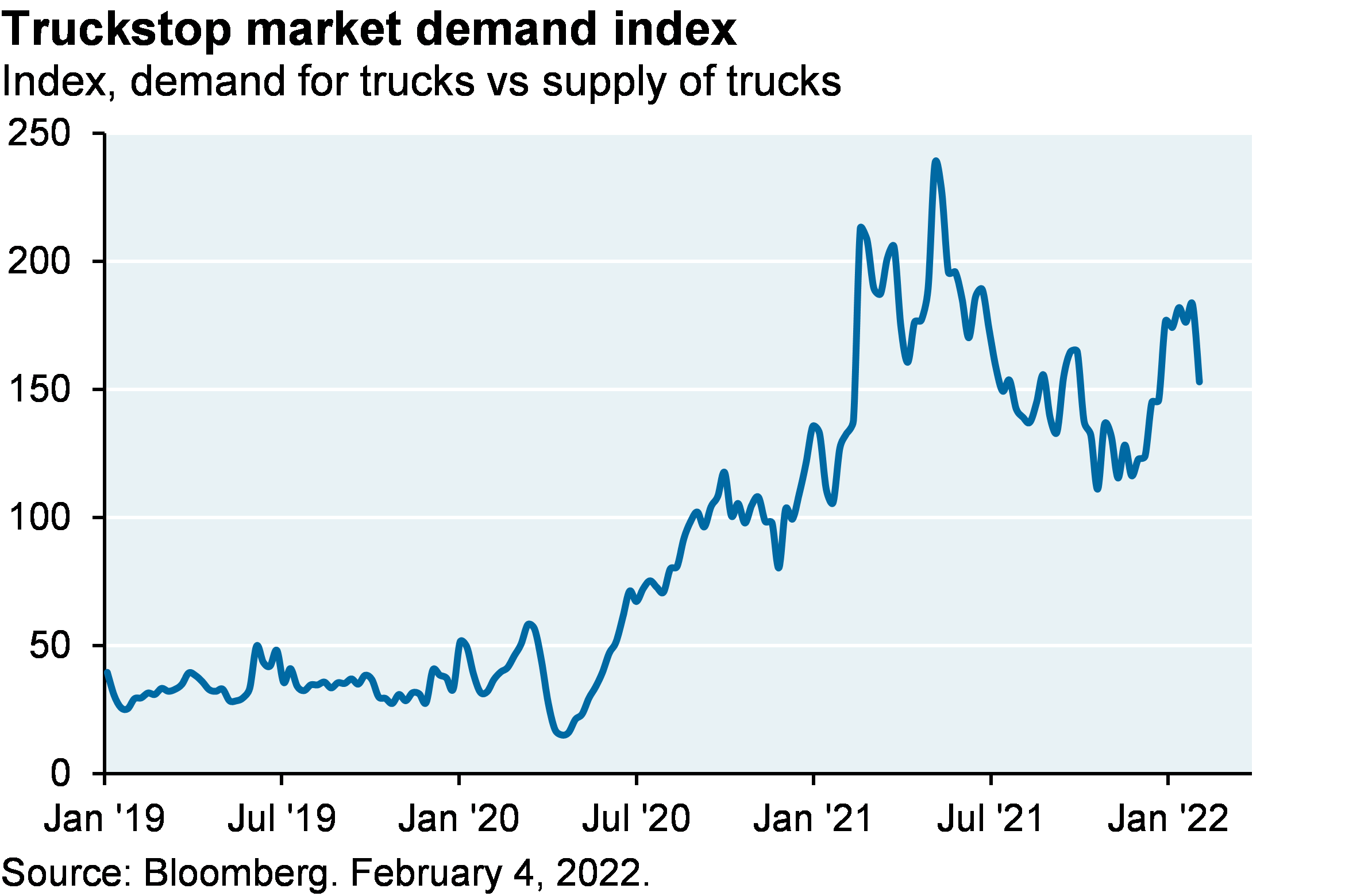 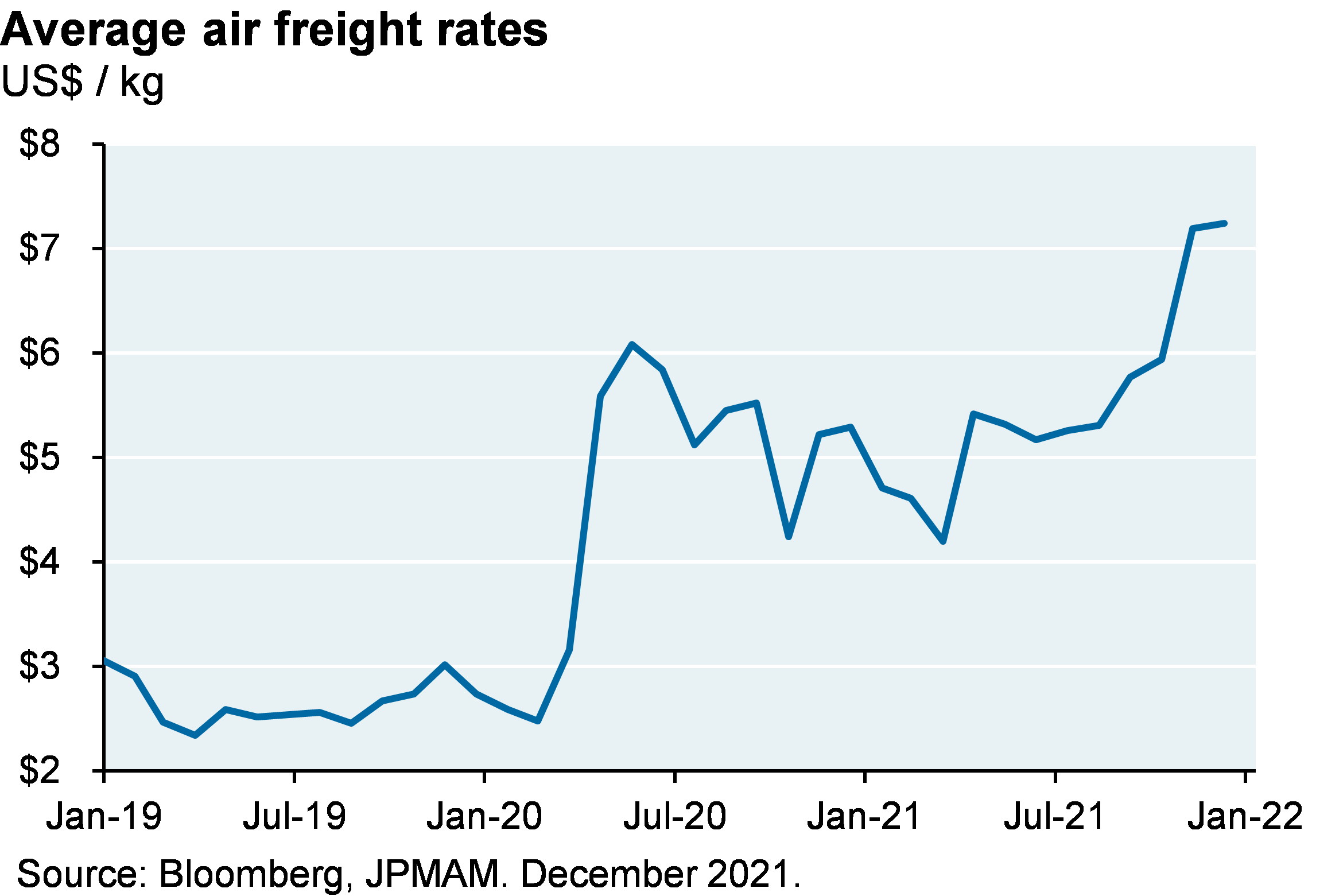 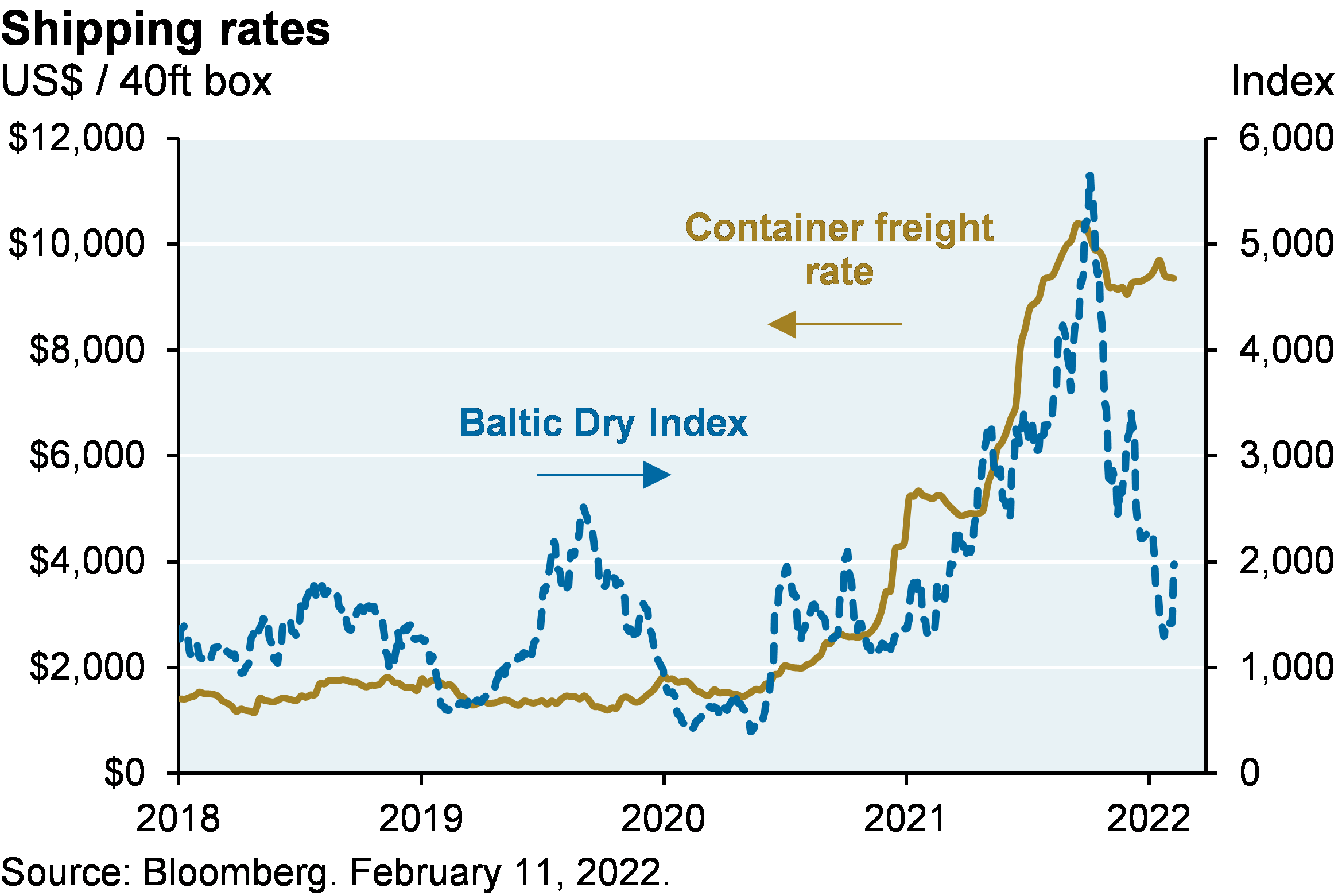 1 Inflation is not just a US phenomenon. From the JP Morgan Economics Research Global Data Watch, February 11, 2022: “Across countries, the sharp rise in core inflation in the Euro area and EM Asia (ex. China and India) is most notable. An acceleration in food and services price inflation points to pressures extending well beyond items closely linked to the pandemic. US measures of inflation breadth have moved substantially higher and align with evidence of rising wage inflation”.
2 As we illustrate each year in our Energy paper, Europe imports roughly the same amount of oil and gas from Russia as it produces for itself. There is perhaps no greater difference between Europe and the US than the question of energy dependence.
3 “The credit unwind”, Flows & Liquidity Report, JP Morgan Global Markets Strategy, Feb 9, 2022
4 See Exhibit 22 in “The Yield Curve and the Equity Market”, Empirical Research Partners, February 11, 2022
5 John Mearsheimer is a Distinguished Service Professor of Political Science at the University of Chicago
6 When the Ukraine abandoned its nuclear weapons 30 years ago, the Budapest Memorandum offered Ukraine security assurances against the future use of force by the US, UK and Russia. But the Memorandum only required signatories to raise any issues with the UN Security Council; it was not a defense treaty and the US has stated in the past that it is not legally binding.
7 None of these sources cite pre-existing medical conditions as a major reason why people are unvaccinated:
https://www.kff.org/coronavirus-covid-19/poll-finding/kff-covid-19-vaccine-monitor-profile-of-the-unvaccinated/
https://www.cdc.gov/vaccines/imz-managers/coverage/adultvaxview/pubs-resources/sociodemographic-factors-covid19-vaccination.html
https://www.census.gov/library/stories/2021/12/who-are-the-adults-not-vaccinated-against-covid.html
https://www.washingtonpost.com/politics/2021/11/16/party-divide-vaccination/