When does unusually large become usual?

The FOMC unanimously decided to increase its Federal Funds target rate by 75 bps for the second consecutive meeting, which is the most aggressive tightening since the 1980s. The new target range is 2.25% - 2.50%. Interest on Reserve Balances (IORB) and the overnight Reverse Repo Rate (RRP) were also increased by equivalent amounts to 2.40% and 2.30%, respectively. The unanimous decision was notable as Esther George, who dissented for a smaller 50 bp increase in June, moved back in line with her peers.

Inflation remains the Fed’s top focus. During the press conference, the Fed Chair, Jerome Powell, made multiple references to fighting inflation, which has been running well above the Fed’s long-run goal of 2.00%. The Fed remains steadfast in its conviction to fight inflation, but its future path has not yet been defined and will depend on data. With 56 days between FOMC meetings, there will be a lot of data to digest, but the market will be especially focused on the Consumer Price Index (CPI) print that comes out August 10. Currently, Chair Powell has chosen not to guide the market towards a rate increase of 50 bps or 75 bps at the September meeting, and instead commented that another unusually large 75 bp rate hike will be data dependent. However, it’s possible the CPI number could sway markets, ergo the Fed, even more definitively in one direction. If the data dictates another 75 bp rate increase, at what point do unusually large 75 bp rate hikes become usually large? While the Fed may believe that 75 bps rate hikes are unusually large and want to move at a slower pace in the future, we believe the Fed will size further increases to fit the incoming data.

The market currently favors an increase of 50 bps at the September meeting and is calling for about 100 bps in additional tightening over the remaining three Fed meetings in 2022. Over the first half of the year, markets became increasingly hawkish, running ahead of the Fed’s own projections for the target range. However, market estimates for future Fed hikes have come down recently and forward curves have even begun to project cuts in 2023. The chart below (Exhibit 1) shows that for the first time, market expectations for future rate hikes are crossing below previous meeting expectations. 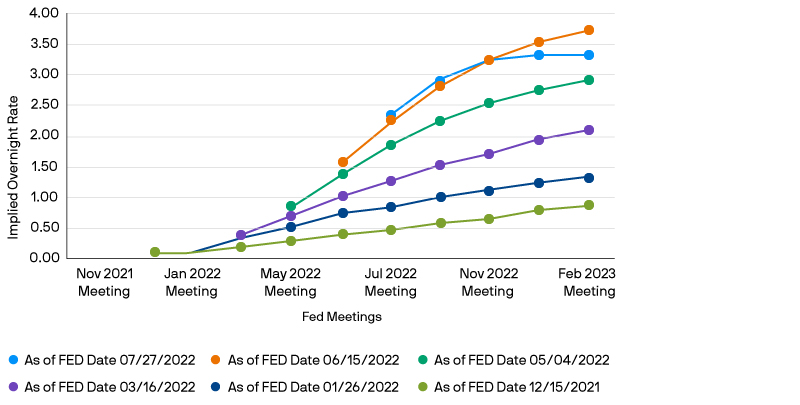 During the press conference, Chair Powell attempted to address market estimates by referencing the Fed’s June Summary of Economic Projections (SEP), which implied 2022 year-end rates of 3.25% - 3.50%, and suggesting that was still a reasonable estimate, along with the 50 bps in tightening projected by the SEP for 2023. The Fed has moved expeditiously towards neutral, and according to Chair Powell, rates are currently within the neutral range. Ultimately, the Fed still believes that it will be able to taper its rate hike path and guide markets to a soft landing.

The Fed chose to not make any adjustments to its quantitative tightening plan, and assets will continue to roll off its balance sheet at a pace of $47.5 billion a month ($30.0 billion in Treasuries and $17.5 billion in mortgages). We anticipate the current pace will have no near-term, material impact on short-term credit markets as demand for short-dated investments remains high, illustrated by elevated Fed RRP balances above $2.1 trillion.