Getting tough on inflation

The Federal Open Market Committee unanimously decided to increase its federal funds target rate by 75bps for the third consecutive meeting, as Fed officials remain focused on dampening inflation. The new target range is 3.00%-3.25%. Interest on reserve balances (IORB) and the overnight RRP were also increased by equivalent amounts to 3.15% and 3.05%, respectively. The fed funds target rate has now come full circle and surpassed the peak reached at the end of the last rate hike cycle in 2019.

The Fed is intent on being tough on inflation, both in action and word. In action, the third consecutive 75bp rate hike makes this the swiftest pace of rate hikes dating back to the 1980s, when Paul Volcker was chairman. Additionally, in previous meetings Chairman Jerome Powell stated that a 75bp rate hike was unusually large. As this is the third consecutive 75bp rate increase, Powell and the FOMC have made what was previously unusually large hikes into “usually” large hikes in order to tamp down inflation.

In word, Powell continued to state that the FOMC is committed to getting inflation down to its 2% target. He also stated that the main message from Jackson Hole, a message taken as hawkish by the market, has not changed. Powell even mentioned that there isn’t a painless way to put inflation behind us, but emphasized his commitment to get inflation down to target. All this is to ensure inflation expectations remain anchored.

The summary of economic projections and the DOTS were also released at the meeting, with several significant updates from the last June release. Some argue that the projections are now a bit more realistic given the pace of rate hikes, showing a lower estimated change in real GDP, and both unemployment and inflation higher.  The DOTS, which outline Fed member estimates of the future federal funds rate, were also higher.  The median estimate for the federal funds rate at the end of 2022 moved higher by 100bps, since the June release, to 4.375%, implying 125bps in additional tightening this year. With only two meetings remaining in 2022, there could be a 75bp rate hike in November and a 50bp rate hike in December.

Notably, almost half of the estimates called for rates to rise by 100bps by year end. Ultimately, the data will dictate the future pace, but given the current estimates, it’s possible the pace of hikes has reached a crescendo. The DOTS also shed light on the median expectations for the terminal rate, estimated at 4.625% at the end of 2023, and then show a decline of 175bps over the following two years to slightly above the 2.5% neutral rate, in 2025. At least for the moment, market expectations for future hikes are very similar to the DOTS projections, and like the projections, have continued to shift higher since the beginning of the cycle (Exhibit 1). 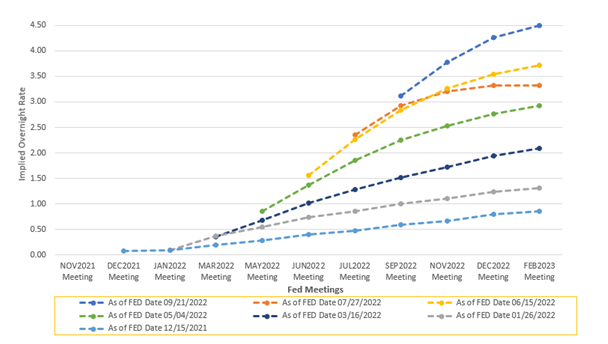 The Fed chose to not make any adjustments to its quantitative tightening plan, letting it run in the background. However, as originally planned, the pace of assets rolling off its balance sheet was stepped up in September, to a pace of USD 95 billion a month (USD 60.0 billion in Treasuries and USD 35 billion in mortgages). We anticipate the current pace will have no near-term, material impact on short-term credit markets as demand for short-dated investments remains high, illustrated by elevated Fed RRP balances above USD 2.3 trillion.