The FOMC showed once again that it is prepared to take interest rates into sufficiently restrictive territory in order to clamp down on inflation. For the fourth consecutive meeting, it unanimously decided to increase its Federal Funds target rate by 75bps to a range of 3.75%-4.00%. Interest on reserve balances (IORB) and the overnight RRP were also increased by equivalent amounts to 3.80% and 3.90%, respectively.

It seemed the Fed had initially guided the market to a potentially slower pace of future rate hikes. In the statement, the committee shared that it “will take into account the cumulative tightening of monetary policy, the lags with which monetary policy affects economic activity and inflation and economic and financial developments.” This was an update to the September statement and while we assume the Fed was aware of this dynamic, the fact that it was highlighted in the statement signaled that perhaps we are nearing a slowdown in the pace of rate hikes. The markets initially took this as dovish and if the Fed left the communication without any follow up commentary, it could have eventually been perceived as a stumble in the central bank’s inflation fight. This could have potentially led to a rise in inflation expectations, which we know is harder to get back under control once entrenched.

At the conference, Chair Powell’s comments leaned more hawkish. He stated that it would be “very premature” to think about pausing, that the costs of under-tightening are greater than the costs of over-tightening, and that the data since the last meeting suggests that interest rates will be higher than previously expected. At the time of the September meeting, the median FOMC terminal rate expectation was 4.625% for this cycle. Post-conference, market expectations for the terminal rate slightly rose and remain north of 5.00%, while the timing of when we will reach the terminal rate was pushed out a meeting to June 2023. Also, some of the rate cuts that were priced into the market for the latter half of 2023 began to get priced out. Ultimately, the Fed has seemingly taken the focus off the road and centered it on the destination, thus potentially pivoting to a slower pace of rate hikes while appearing steadfast in its inflation fight.

The chart below (Figure 1) is a good visualization of how the Fed was able to communicate a potential downshift in the pace of rate hikes, while market perception of Fed hawkishness continues to strengthen. 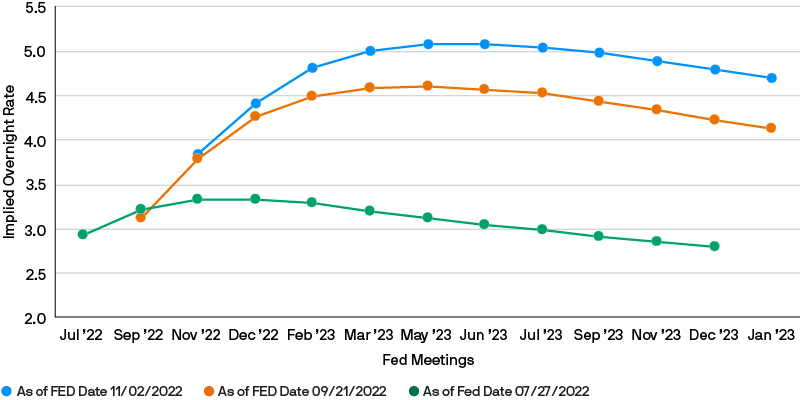 The Fed’s balance sheet reduction (quantitative tightening) continues in the background at a pace of USD95 billion a month (USD60 billion in Treasuries and USD35 billion in mortgages). We anticipate the current pace will have no near-term, material impact on short-term credit markets as demand for short-dated investments remains high, illustrated by elevated Fed RRP balances above USD2.2 trillion.

We believe money market investors should continue to welcome higher monetary policy rates. The short average maturity of money market funds, due in part to the substantial positions held in overnight to one-week maturities, allows funds to quickly reset yields in-line with market rates. As a result, Global Liquidity portfolios seem well positioned to capture the uplift in overnight rates and stand to benefit from continued tightening by the FOMC.

NOT FOR RETAIL DISTRIBUTION:
This communication has been prepared exclusively for institutional, wholesale, professional clients and qualified investors only, as defined by local laws and regulations. The views contained herein are not to be taken as advice or a recommendation to buy or sell any investment in any jurisdiction, nor is it a commitment from J.P. Morgan Asset Management or any of its subsidiaries to participate in any of the transactions mentioned herein. Any forecasts, figures, opinions or investment techniques and strategies set out are for information purposes only, based on certain assumptions and current market conditions and are subject to change without prior notice. All information presented herein is considered to be accurate at the time of production. This material does not contain sufficient information to support an investment decision and it should not be relied upon by you in evaluating the merits of investing in any securities or products. In addition, users should make an independent assessment of the legal, regulatory, tax, credit and accounting implications and determine, together with their own financial professional, if any investment mentioned herein is believed to be appropriate to their personal goals. Investors should ensure that they obtain all available relevant information before making any investment. It should be noted that investment involves risks, the value of investments and the income from them may fluctuate in accordance with market conditions and taxation agreements and investors may not get back the full amount invested. Both past performance and yield are not a reliable indicator of current and future results. J.P. Morgan Asset Management is the brand for the asset management business of JPMorgan Chase & Co. and its affiliates worldwide. To the extent permitted by applicable law, we may record telephone calls and monitor electronic communications to comply with our legal and regulatory obligations and internal policies. Personal data will be collected, stored and processed by J.P. Morgan Asset Management in accordance with our privacy policies at https://am.jpmorgan.com/global/privacy. This communication is issued by the following entities: In the United States, by J.P. Morgan Investment Management Inc. or J.P. Morgan Alternative Asset Management, Inc., both regulated by the Securities and Exchange Commission; in Latin America, for intended recipients’ use only, by local J.P. Morgan entities, as the case may be; in Canada, for institutional clients’ use only, by JPMorgan Asset Management (Canada) Inc., which is a registered Portfolio Manager and Exempt Market Dealer in all Canadian provinces and territories except the Yukon and is also registered as an Investment Fund Manager in British Columbia, Ontario, Quebec and Newfoundland and Labrador. In the United Kingdom, by JPMorgan Asset Management (UK) Limited, which is authorized and regulated by the Financial Conduct Authority; in other European jurisdictions, by JPMorgan Asset Management (Europe) S.à r.l. In Asia Pacific (“APAC”), by the following issuing entities and in the respective jurisdictions in which they are primarily regulated: JPMorgan Asset Management (Asia Pacific) Limited, or JPMorgan Funds (Asia) Limited, or JPMorgan Asset Management Real Assets (Asia) Limited, each of which is regulated by the Securities and Futures Commission of Hong Kong; JPMorgan Asset Management (Singapore) Limited (Co. Reg. No. 197601586K), this advertisement or publication has not been reviewed by the Monetary Authority of Singapore; JPMorgan Asset Management (Taiwan) Limited; JPMorgan Asset Management (Japan) Limited, which is a member of the Investment Trusts Association, Japan, the Japan Investment Advisers Association, Type II Financial Instruments Firms Association and the Japan Securities Dealers Association and is regulated by the Financial Services Agency (registration number “Kanto Local Finance Bureau (Financial Instruments Firm) No. 330”); in Australia, to wholesale clients only as defined in section 761A and 761G of the Corporations Act 2001 (Commonwealth), by JPMorgan Asset Management (Australia) Limited (ABN 55143832080) (AFSL 376919). For U.S. only: If you are a person with a disability and need additional support in viewing the material, please call us at 1-800-343-1113 for assistance.
Copyright 2022 JPMorgan Chase & Co. All rights reserved.