The European Central Bank (ECB) took a hawkish turn at the February meeting, putting the market on alert for potential rates hikes later this year. While this was not a meeting where the ECB unveiled a new set of forecasts, it nonetheless provided a number of talking points.

But first, the boring bit..

Main policy rates were left on hold as expected, with the deposit rate at -50 basis points (bps) and main refinancing rate at 0 bps. Forward guidance was also confirmed, with the ECB expecting interest rates to “remain at their present or lower levels until it sees inflation reaching 2% well ahead of the end of its projection horizon and durably for the rest of the projection horizon, and it judges that realised progress in underlying inflation is sufficiently advanced to be consistent with inflation stabilising at 2% over the medium term”.

What has driven the change in tone?

It was in the press conference Q&A where things got interesting. Quite simply President Christine Lagarde made the admission that “things have changed”, particularly with regard to inflation. Enough so that the risk assessment around inflation (contained in the Monetary Policy Statement) is now deemed to be tilted to the upside, particularly in the near-term.

Headline inflation reached a new record in January of 5.1% (figure 1), much higher than the ECB was forecasting in December and it commented that inflation was likely to remain elevated for longer than previously expected, before declining later in the year. From the December ECB meeting minutes, it was evident that the chorus of hawkish voices was growing, but in February Lagarde went as far as to say that concern around the latest inflation numbers was unanimous.

How the ECB’s inflation forecasts evolve over the coming months will be key. Undoubtedly, we are likely to see a further upward revision to the 2022 forecast in March (currently at 3.2%), but any upward revisions to the forecasts for 2023 and 2024, which currently sit at 1.8%, would move things a lot closer to fulfilling the ECB pre-conditions for rates to rise.

The missing piece of the puzzle that would likely push the ECB to raise these medium-term forecasts is wage growth, which has thus far remained muted (figure 1). Nevertheless, the euro area labour market is becoming tighter, with unemployment reaching record lows of 7.0% in January (figure 2), well ahead of the ECB’s December forecasts. But unemployment continues to fall to record lows, so wage negotiations need to be watched closely. 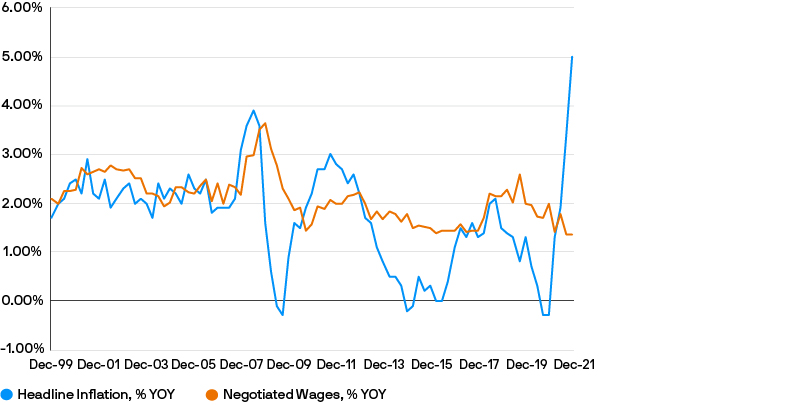 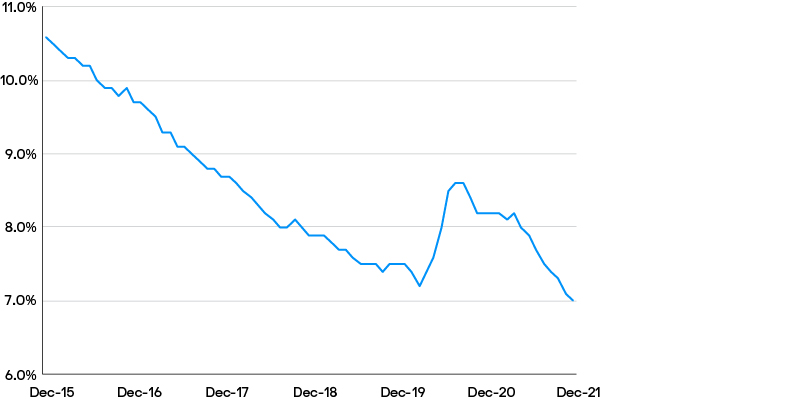 Are the ECB about to join the rate-hiking club?

Lagarde fielded a number of questions around other central banks and why the ECB is different. Clearly the ECB could be viewed as a bit of a laggard, when compared with the Bank of England which has already delivered back-to-back hikes and the Federal Reserve which signalled an imminent start in March.

The message from Lagarde was: let’s not get carried away. She raised valid points that the ECB was operating in a very different environment from those other regions, highlighting a tighter labour market in the UK and a stronger recovery in the US propelled by a greater degree of fiscal stimulus. It should also be kept in mind that the ECB has had a problem generating inflation over the last decade or more, a phenomenon absent in those other regions.

So if not now, then when?

Lagarde declined to repeat her comment from December that the ECB viewed a 2022 rate hike as very unlikely. The market was already challenging this view particularly in recent weeks, but this gave further impetus to the move, with the market pricing in more than 40bps by the December meeting, versus 25bps just before the meeting (figure 3). 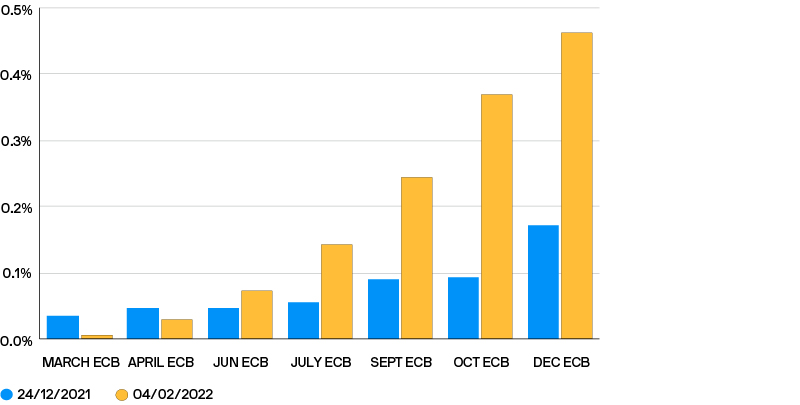 Any notion that a rate hike is imminent was dashed by Lagarde’s confirmation that the Governing Council would be sticking to the sequencing it has previously outlined – that rates hikes would not occur until shortly after net purchases under the APP had concluded. The ECB’s plan for asset purchases laid out in December would put this in Q4 at the earliest. However, given the hawkish tone delivered at the February meeting, accelerating the pace of tapering seems likely, but would be tied to upward movements in inflation forecasts. The next few meetings will need to be monitored closely.

The good news for euro cash investors is that money market rates are slowly moving higher, though this will be fairly modest until the ECB actually pulls the trigger. We are starting to see some steepening of the money market curve (figure 4) but compared to what we have seen year-to-date in other markets, the scope for further steepening is clear.

We will look to take advantage of this steepening, but will also be keeping a close eye on how the data evolves and what this means for messaging from the ECB with regards to likely lift-off for rates.

One interesting question is whether the ECB would move in steps of 10bps or 25bps initially. On the journey into negative rates, the ECB moved cautiously in increments of 10bps. That does not mean that it has to exit in the same manner. When it is ready to move towards normalising rates, there will certainly be more hawkish ECB members arguing for larger 25bps moves, to decisively leave negative rates behind.

The market no longer views an exit from negative rates as a distant prospect, with a zero deposit rate now priced in for Q1 2023.