What happens if the Fed tries to normalize its balance sheet again?

The U.S. Federal Reserve (Fed) has become a dominant player in the bond market through successive rounds of quantitative easing (QE). More recently the Fed has focused on ensuring there is appropriate liquidity in the financial system through the purchase of treasury bills (T-bills) and repurchases agreements (repos). This has raised questions about whether this is simply QE by another name and what happens when the Fed either stops or starts to reduce these purchases.

The Fed’s balance sheet is expanding once again. A surge in short-term lending rates in the repo market in September last year stoked fears that the Fed’s plans to ‘normalize’ the size of its balance sheet would perversely affect markets. The squeeze on lending rates was actually driven by a temporary mismatch in the supply and demand of available reserves. The Fed’s first response was to provide short-term liquidity to bring lending rates back in line with the Fed funds target range and mitigate market fears about the health of the financial system.

Subsequently, the Fed started to increase the level of reserves it holds as assets on its balance sheet to ensure adequate future supply and avoid any further squeeze on rates. The Fed is purchasing USD 60billion in T-bills each month as well as providing liquidity to the repo market, and it plans to do this into the middle of the year.

The market has interpreted the renewed balance sheet expansion as a new round of QE, whereas the Fed argues it is technically not. The goal of QE was to reduce long-term interest rates to stimulate corporate activity, lower mortgage costs and incentivize households to spend. To achieve this, the Fed deliberately targeted the purchase of longer-dated bonds. The current actions are designed to ensure the smooth functioning of the financial system and address any mismatch between the supply and demand of bank reserves. In the Fed’s own words, it plans to operate in an ample-reserves regime that is consistent with the efficient and effective implementation of monetary policy.

Moreover, the banking system is a relatively closed loop and reserves added by the Fed can only be held by deposit-taking institutions, not the wider market, greatly limiting the potential ‘spill over’ into other areas of the financial market or broader economy through the same transmission mechanism as QE. So as much as investors may see this episode of balance sheet expansion as a reason to ‘not fight the Fed’, the relationship between a higher level of reserves, easier financial conditions, a rising equity market, and a fall in long-dated bond yields is not as clear. 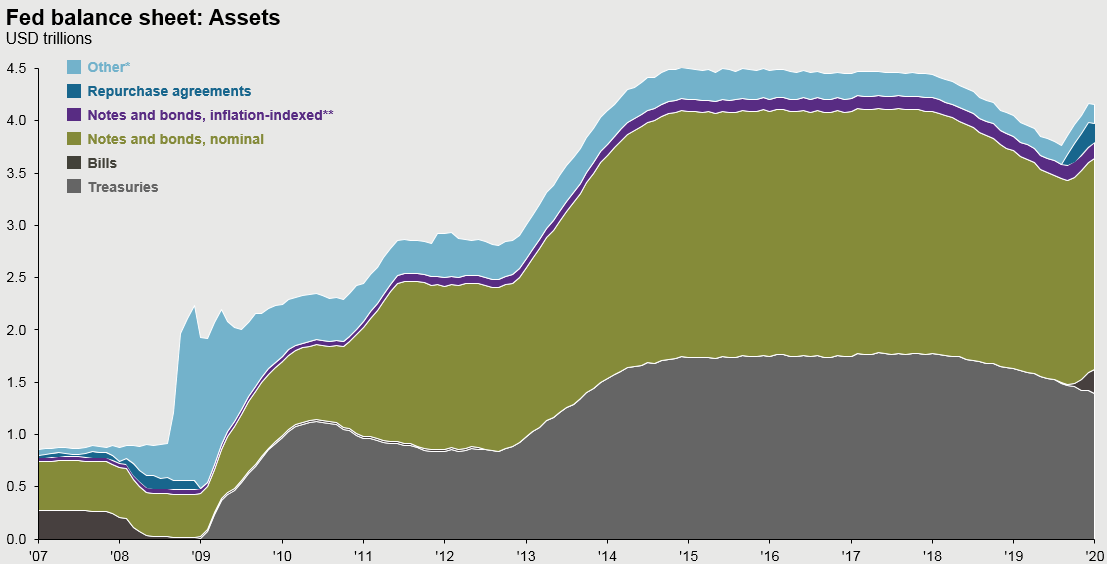 There is more money in the U.S. economy than there was prior to the global financial crisis. To accommodate this, the Fed’s balance sheet needs to be larger and the level of reserves higher to ensure the effective running of the financial system. Eventually, the Fed will purchase enough short-dated instruments and T-bills to reach an adequate level of reserves to meet this requirement.

Whether the purchase of T-bills or actions in the repo market are explicit QE is debatable. The purchases may not meet the traditional notion of QE that has been used since 2008, but it can be argued that any action by the Fed to depress interest rates and attempts to foster an easing in financial conditions meet a broader definition of QE.

QE or not, the challenge for the Fed is to convey to markets that an end to the purchases will not lead to a significant reduction in liquidity. Equity markets are likely to remain apprehensive around the messaging. However, the Fed is more sensitive to market ructions now than in the past, and any pick up in volatility is likely to be short-lived.

Along with the Fed funds rate, the Fed’s balance sheet is now a key instrument by which to influence interest rates and the cost of money in the economy. It will be the more ‘vanilla’ style of QE and the purchase of longer-dated bonds which influences benchmark bond yields. As such, in the medium-term, the yield on the U.S. 10-year Treasury will be determined by the outlook for growth and inflation in the U.S. The current moderate outlook for both and the expected pick up in global economic activity post the coronavirus episode suggest that yields are at the lower end of the 1.5%-2.0% range they are expected to move in this year.