From COVID to QE

Central banks are once again acting to steady volatile markets in the wake of the widening economic impact from the COVID-19 virus. In Australia, The weakness in domestic demand and failure of the three rates cuts last year to lift corporate and consumer sentiment had already created a case for further easing by the RBA this year, the COVID-19 virus just accelerated the process.

At the March meeting the RBA cut rates by 25 basis points and represents a prudent move to address uncertainly given the vast number of unknowns about the virus and how fast and far it could spread, while acknowledging that will further dampen already subdued  domestic activity.

The RBA is ready to act again if needed, and at the time of writing the potential for another rate cut in the coming months is high. However, the nature of the COVID-19 outbreak remains fluid with a variety of possible outcomes. Containment could be achieved in a matter of weeks, or the viral infection may spread further with wider ranging control measures and disruptions to economic activity.

While the path for monetary policy is not set, a strong downward bias will remain until there is greater clarity over the viral infection. This means that the RBA is fast approaching what is widely thought to be lower bound for the cash rate at 0.25%.

Unconventional policies may be implemented this year, especially as the economy outside of the housing market has been slow to respond to the 75 basis points of cuts last year and the new economic risks from the COVID-19 virus.

Markets have been aggressive in pricing easier monetary policy
EXHIBIT 1: Market pricing of easing for policy rate changes by 2020 year-end 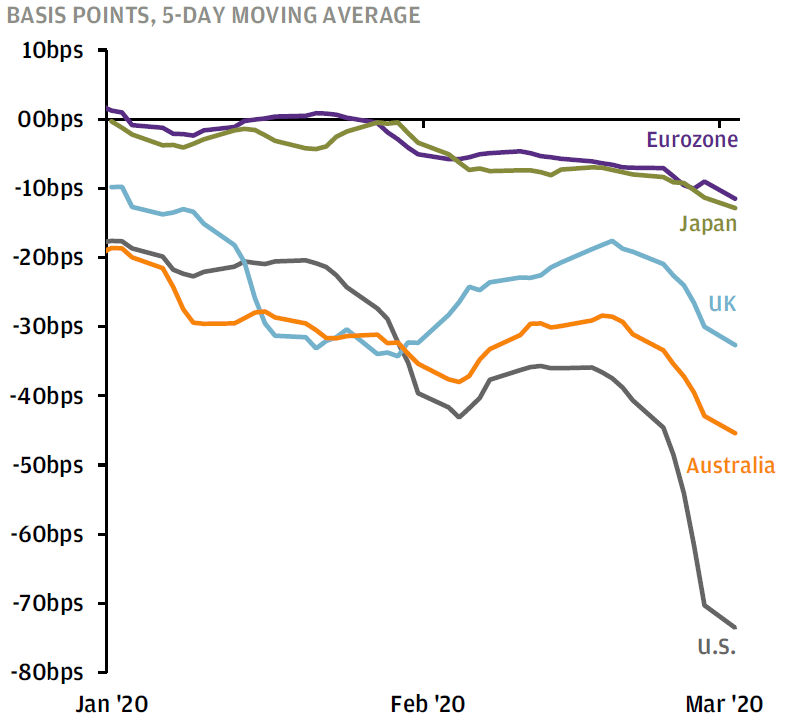 Statements such as “If we are not achieving our objectives, then we have a mandate to try and achieve our objectives” suggest the RBA isn’t opposed to using the unconventional. Although, the experience of the world’s biggest central banks shows that extreme monetary stimulus has failed to boost growth and inflation rates. As a new cycle of easing starts there are many questions about how effective policy can be from already low or negative rates. 1

Easing policy from already low rates has a diminishing positive impact on the real economy and the risk of falling into the liquidity trap rises. This is a situation where the benefits of lower interest rates are not transmitted to the economy due to signalling effects, regulatory constraints or reduced pass through from retail banks.2

The nature of the shock to the economy matters as well. The RBA’s actions are designed to mitigate market and corporate uncertainty, as well as alleviating any corporate and household debt burdens in the face of slower economic growth. At best this will cushion the blow from the viral spread but cannot stop it. As powerful as central bank have become in the eyes of the markets, they cannot reopen or increase production in factories in China or anywhere.

The government is more receptive to spending but action appears limited. The bushfires that gripped the country during the summer combined with the unknown impact of the viral spread have increased the chance of a boost to the economy in the May Budget. However, it is not clear at this stage just how significant any fiscal stimulus will be, and it will be determined by the pace of the viral spread between now and Budget day.

Unconventional monetary policy is not just the purchase of bonds and the RBA has deviated from the traditional. In the last few years forward guidance became prevalent and explicit. Tying the outlook for rates to the unemployment rate was the latest means to provide a sign post for how the interest rates may move.

Negative rates appear a step to far for the RBA based on speeches from Governor Lowe and a view that unconventional policies would be implemented before rates reach zero.3 The focus turns to bond purchases or provisions of loans to banks, both areas where it is possible to draw on international experience.

The outright goal of quantitative easing is the same everywhere, to drive down rates and stimulate the economy. However, the means to achieve that goal shapes how the QE program may look. In the U.S. QE came on the back of a housing-led recession. The U.S. Federal Reserve wanted to drive down mortgage rates and heal a damaged housing market. Meanwhile, in the eurozone the European Central Bank (ECB) needed to address a fractured banking system and austere government fiscal policies. A by-product in both the U.S. and eurozone has been to weaken the currency.

For the RBA, the challenge remains balancing the stimulus needed to offset the weak domestic demand caused by low wage growth and frail business investment that may be exacerbated by the COVID-19 spread without heightening financial instability, particularly in the housing market. 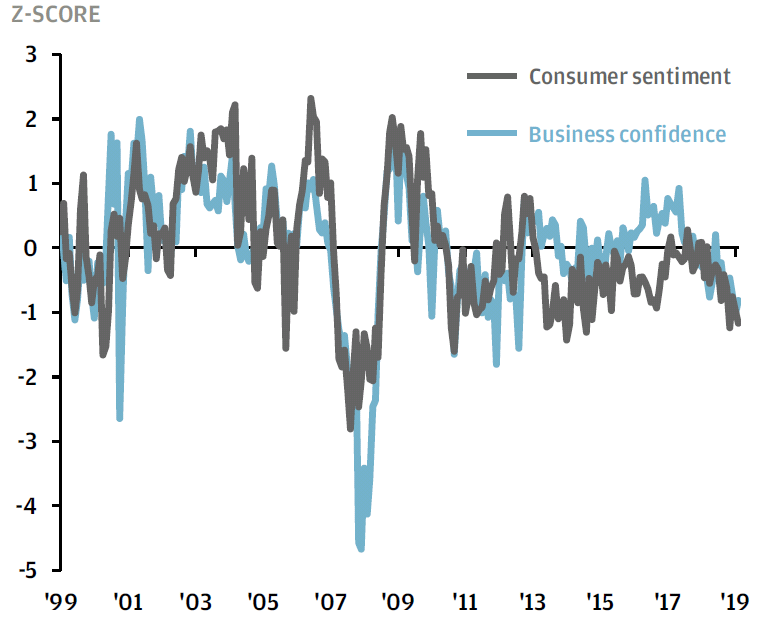 In the event that it does pursue QE, the RBA is likely to pursue as straight forward expansion of the balance sheet through the open-ended purchase of Australian government bonds until there are more tangle signs of economic stability and persistent inflationary pressures. The smaller size of the Australian bond market means that a relatively small share of the bond market could be purchased to start to have a meaningful impact. The value of outstanding Australian Government Bonds is approximately AUD660 billion and the RBA could run a quarterly purchase program between AUD10-20billion per quarter to lower borrowing costs for households, companies and create some depreciation of the Australian dollar to boost trade.

By focusing on the shorter to middle duration bonds, the RBA could improve the transmission effect to households via retail banks given the higher proportion of variable rate mortgages that are linked to the shorter end of the yield curve. Meanwhile, falling risk-free rates and tighter credit spreads from portfolio rebalancing would bring down corporate borrowing costs.

Global forces often dictate the direction of yields on longer dated bonds. Over time we’ve see the impact of lower rates and lower yields in the U.S. push down yields in Australia. Similarly, the practices of the ECB have created an anchor over just how far U.S. Treasuries could rise when the U.S. economy was looking relatively stronger. In the current environment of lower rates and subdued global growth, international pressure may help in keeping local rates low.

Australia’s historic position as a ‘high yielder’ in the government bond market means that there is a relatively high level of foreign ownership of Australian government debt. A little over 55% of outstanding bonds are held by foreign investors and increased selling pressure should lead to a depreciation in the Australian dollar.

Overall, while a very vanilla approach to QE could work in Australia there a risks to financial stability as the starting point is very different to other countries’ experience. The equity market is higher, as are valuations, bond yields are already at record lows and the household sector is highly levered.

The spread of the COVID-19 virus was not something that investors or policy makers had factored into their outlook a few short months ago. The transitory nature of the economic impact from the virus is being tested as more countries react to the spread and the risks a global recession rise.

For Australia, it comes at a time when the domestic economy was already experiencing a period of weakness, and is exacerbated by the reliance on the international sector for trade, tourism and education.

A record low on the cash rate and another step closer to the lower bound raises the chance of the RBA enacting QE. However, unconventional policies are no panacea to persistently low inflation or a mediocre economic backdrop. Then there are the concerns surrounding the destabilising nature that low rates can have and rising asset prices, notable in the housing market. While these considerations may weigh on the RBA’s decision to enter into QE and shape the final package, it doesn’t necessarily mean those steps won’t be taken.

QE or no QE interest rates and bond yields in Australia are likely to remain at low levels for an extended period of time. Bonds provide a stabilising role in portfolio, a message reinforced by market performance over the end of February, but offer very little in way of income. Higher quality credit has some yield pick up and there are selective opportunities in emerging market bonds for higher coupons. Income seekers with the appropriate time horizon should also consider the role that real assets can play in a portfolio as another source of high quality income.

1 The diminished stimulatory impact of monetary policy is explored more in the thematic paper “The failure of monetary stimulus” included in the 2020 Long-Term Capital Market Assumptions publication.
2 The liquidity trap is a situation where interest rates are consistently lowered but with diminishing impact on boosting economic activity.
3 “…it is extraordinarily unlikely that we will see negative interest rates in Australia.” RBA Governor Low, Some Echoes of Melville speech, 29 October 2019.