The continuing expansion of the Chinese bond markets

The Chinese bond market is a relatively new market in comparison with those of Europe, Japan and the U.S.. However, it has grown at a very rapid pace over the past decades, with a compounded average growth rate of 25% per annum since 2000. There are three distinct components of the Chinese bond market: the onshore renminbi (CNY) denominated market, the offshore renminbi (CNH) denominated market and the offshore foreign currency denominated market. The total scale of these markets boomed from an equivalent of USD 0.2trillion (tn) (18% of nominal gross domestic product (GDP)) in 2000 to USD 13.8tn (97% of nominal GDP) in 2019. This ranks only second to the U.S. bond market (USD 40.2tn), providing investors with sufficient liquidity and opportunities for active management.

In 2020, amid the outbreak of COVID-19, the Chinese government is launching a large-scale stimulus package to buffer the economic shocks. Supported by low interest rates and loosening liquidity conditions, bond issuance is picking up quickly. In the government bond market, highlights include the issuance of RMB 1tn in special COVID-19 treasury and RMB 3.75tn in local government special bonds. Financial institutions and non-financial enterprises are also using the opportunity of lower financing costs to raise funds from offshore and onshore bond markets. We expect to see the Chinese bond market size grow to around USD 16.5tn, or 112% of nominal GDP, in 2020 (Exhibit 1). 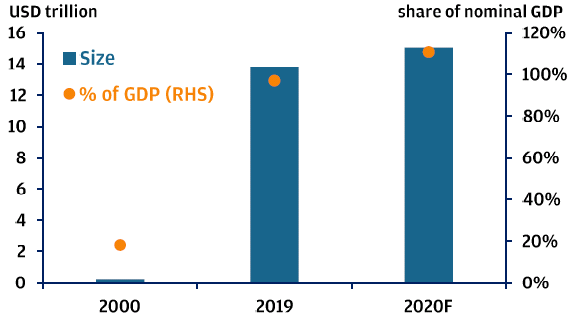 Since the beginning of 2019, DM central banks started a new round of easing, which has so far reached its peak amid the COVID-19 outbreak. As a result, risk-free rates have dropped to zero or even negative in major DM economies, making it increasingly difficult for investors to manage their fixed income portfolios. On the other hand, the PBoC took a relatively prudential stance in its policies. Despite several cuts to key policy rates, i.e. medium-term lending facility and reverse repo rates, the yield-to-maturity of Chinese central government bonds stayed well above their U.S. peers (Exhibit 2). 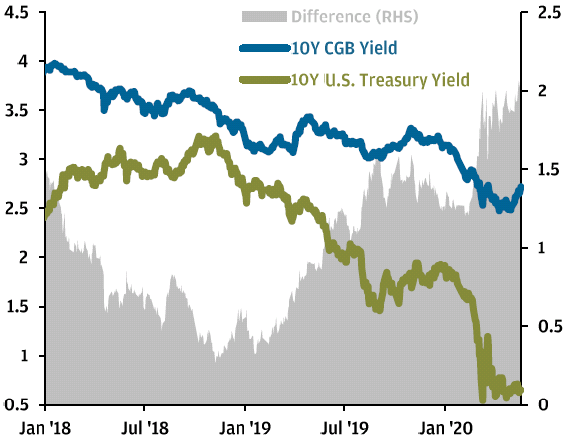 In the universe of corporate bonds, Chinese credit also offers more attractive yields than their DM counterparts (Exhibit 3), since they are considered EM bonds, with higher risk premiums charged. However, the actual risks of Chinese corporate bonds might not be as high as implied by the yields. In both investment-grade (IG) and high-yield (HY) markets, interest coverage ratios have improved in the past years (Exhibit 4). 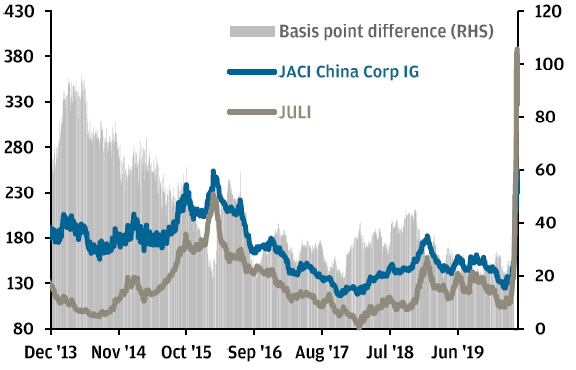 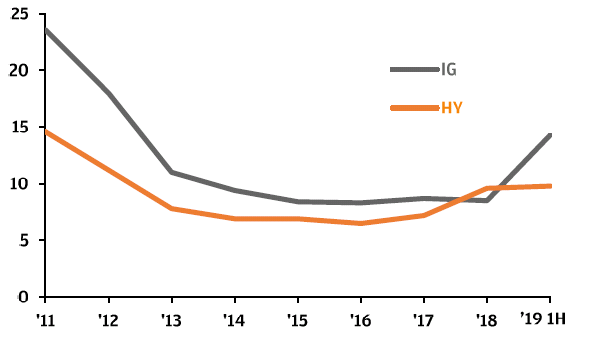 Meanwhile, although the number of default cases in the HY market has jumped since 2018, the default rate might have stabilized in this market, and the recent accommodative monetary policies will also help prevent this risk from rising (Exhibit 5). 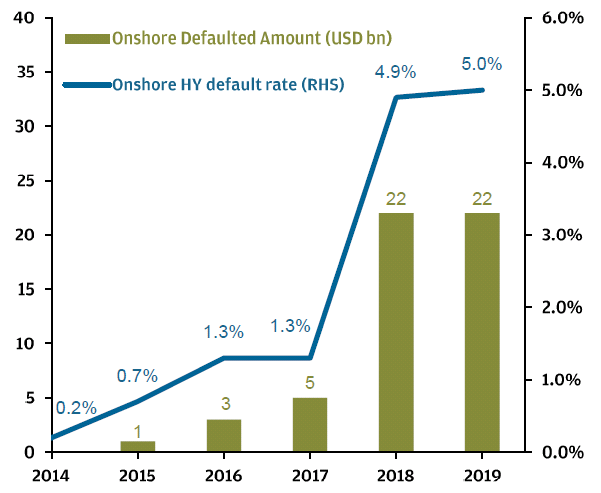 Another risk for global investors comes from the currency, but this is manageable. The PBoC reformed its exchange rate mechanism in August 2015, triggering a round of currency depreciation and a decline in China’s foreign reserves. Since 2018, the exchange rates of CNY and CNH have been driven by news surrounding U.S.-China trade tensions. However, with strengthened capital controls and widening financial opening, Chinese regulators achieved the ability to maintain stable foreign reserves, hence the risk for sharp depreciation is mitigated (Exhibit 6). Moreover, the onshore and offshore forex markets are highly developed, providing sufficient tools for investors to hedge currency risks. 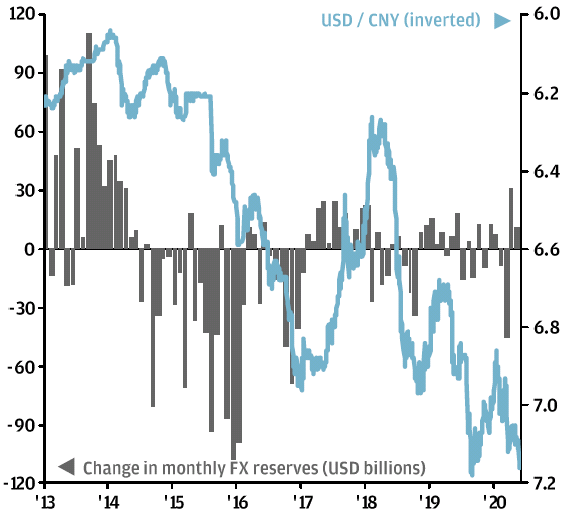 Beyond the features of high yield and resilient solvency, Chinese bonds also offer a great chance for diversification. In the onshore market, major issuers include central and local governments, financial institutions and local government financial vehicles (LGFVs), while the offshore market is dominated by property developers and LGFVs. The economic performance of these sectors is domestically biased, hence making Chinese bond markets far less correlated with global markets. This makes Chinese bond investment a great source of diversification, and investors will particularly benefit from it during a period of high volatility in the global market.

Chinese offshore bond markets are fully open to foreign investors, and the expansion of market size already provides sufficient liquidity. Meanwhile, the investability of onshore bonds has been improving in recent years. Recent developments include the efforts of Chinese regulators to increase the accessibility of the onshore bond market to foreign investors since 2002, recognition of international ratings agencies and the inclusion of Chinese onshore bonds into major fixed income benchmarks.

Investors’ access to the onshore market has improved significantly through the establishment of Bond Connect. Additionally, the ongoing internationalization of the RMB, both as a reserve currency and as the Chinese exchange market itself becomes more responsive to market forces, makes onshore Chinese assets more investable than ever before. The improved accessibility already attracted quick inflows in 2019 from long-term investors who are pursuing the benefits of positive yields and diversification (Exhibit 8).

Chinese bonds might be further supported by the inclusion into major benchmarks. The Bloomberg Barclays Global Aggregate Bond Index began to add Chinese onshore government and policy bank bonds in April 2019, and plans to gradually increase their weight over a period of 20 months until their share of the index reaches roughly 6%. The frequently referenced J.P. Morgan Government Bond Index—Emerging Markets (GBI—EM) began incorporating onshore Chinese central government bonds, up to a weight of 10%, starting in February 2020. Other major bond indices, such as the FTSE World Government Bond Index, are also considering adding Chinese onshore bonds. These three benchmarks, even at their planned low inclusion weights, could draw potential additional inflows of between USD 250bn and USD 300bn into China’s onshore bond market.

The zero or negative interest rates in DM economies have made it increasingly harder for investors to use DM government bonds as a tool to diversify their portfolios, therefore it is essential to seek new opportunities in a wider range of fixed income assets. A robust risk/return feature has made Chinese bonds considerable alternatives for DM bonds, and the large market size could provide sufficient liquidity for international investors. The opening of the onshore bond market and inclusion into major benchmark indices will also boost the investability of Chinese bonds.