Growing up I loved to play Operation, the children’s board game where players tweeze out ailments from a patient’s body without touching the edge, lest a buzzer sound. It’s a game that requires a steady hand and intense precision. Likewise, the Federal Reserve (Fed) is currently playing doctor on the economy by attempting to tame inflation without negatively disrupting the labor market and buzzing the economy into recession. Unfortunately, the twin commodity shocks of Covid and the War in Ukraine have made the Fed’s task immensely more difficult, and now it’s as though they’re playing their own version of Operation… while driving over potholes. The below examines several “potholes” they will need to navigate.

Oil: Brent is trading at USD120 and nearing the post-invasion highs set in late February. Sanctions have left the global supply chain in disarray with Russian oil trading at a USD35 discount and UAE exports to the EU trading at an USD11 premium. At the moment, there is not enough supply to offset demand. US production is roughly the same as the start of the year, OPEC is 750kbpd (thousand barrels per day) behind its quota, the Iran deal is looking increasingly unlikely, and reserve releases have already been telegraphed. Underwhelming Chinese demand due to Covid lockdowns provided a temporary respite but now appears to be improving. Taken together, the oil market will trade in a deficit, which will keep prices elevated.

Food: In 2010, Russia banned grain exports, and the UN Food and Agriculture index rose 40%; since the war in Ukraine began, it has only risen 16%. With farming and exports limited, coupled with several Asian countries also capping exports, risks are skewed to the upside.

Inflation: Food and energy will remain tailwinds to inflation, even if prices stay steady. That said, if prices trend higher, and we maintain the 6 month average pace of 0.71% MoM, headline inflation could actually hit a new high over 9% in September. On core inflation, the Fed’s preferred measure, there is only limited evidence that supply chain bottlenecks are easing, and while core goods have been declining monthly, prices remain historically elevated on a YoY basis. Shelter and other core services are also moving higher. Despite optimism that we passed the peak, the inflation market is actually pricing a near term acceleration of inflation, followed by only a modest decline in 4Q, signaling the Fed might not see satisfaction until 2023.

Labor market: Despite anecdotes in the tech sector, the labor market remains remarkably strong. Although the pace of job and wage growth has started to decline in recent months, the levels are still high. The 3-month moving average of nonfarm payrolls sits at 400k and the 6-month annualized pace of average hourly earnings is 4.7%, markedly above the pre-covid high of 4%. There remains a 5mm person gap between the number of job openings and the number of unemployed. Barring a drop in payrolls below 100k per month or a large pick up in participation, the unemployment rate will remain around 3.5%, if not lower.

Can the Fed achieve a successful operation? As of today, inflation is historically high and unemployment historically low; looking ahead, however, the situation is more nuanced for two reasons. First, despite a strong labor market, consumer sentiment is at levels not seen since the financial crisis.

This is likely because high inflation is starting to bite. Everyday items such as food and gasoline are rising rapidly (the average gasoline price is approaching USD5/gallon) and savings rates are declining, implying there is less capacity for consumers to weather sustained high prices. In essence, consumers may be fine now, but they are nervous about the future. Second, when the Fed outlined they would use 50bp hikes to move into restrictive territory by 2023, financial conditions tightened materially and recession probabilities shot higher. 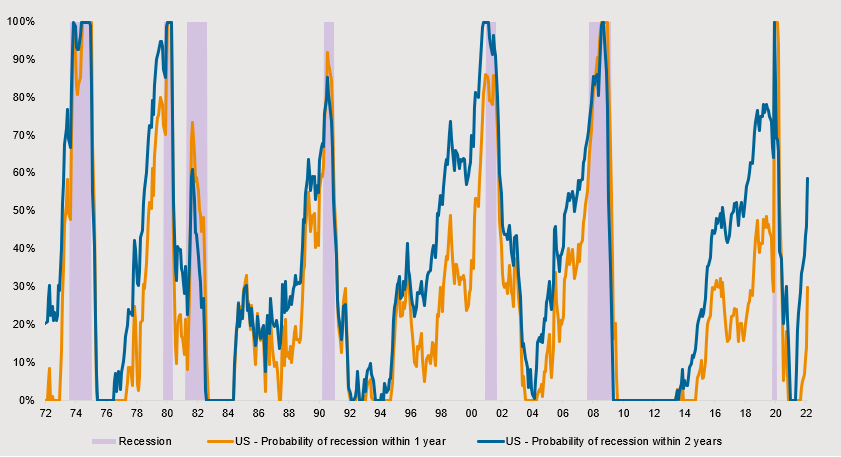 So the Fed has signaled they want to expeditiously hike rates to ~2.75% to quell inflation, but the market thinks a recession is likely next year. Here are a few scenarios that could play out:

In the end, there might just be too many potholes. Monetary policy is a blunt instrument, not a scalpel, so no matter how steady their hand may be, buzzing the economy into recession might be inevitable

The Three Phases Model guides positioning for Quantitative Tightening, but with some new monetary quirks. Risk-off with simultaneously rising yields might not persist much longer.

Silver bullets are not magnetic

I explain why a whatever-it-takes policy approach is not a silver bullet and will eventually lead to pain.