A sweet spot for the Australian dollar

The Australian dollar initially fell sharply as the impact of Covid-19 spread across the world, global stock prices fell and funding markets dislocated. The recovery since the lows in March has been dramatic, with the currency now stronger than prior to the outbreak. This recovery has been in part due to the success of aggressive fiscal and monetary policy easing and central bank liquidity provision in stabilising global asset markets. However, it also reflects some currency-specific developments.

Most importantly, Australia has moved from a current account deficit to a surplus. This structural improvement has been driven by rising export volumes, which are a result of prior investment into the natural resources sector – a trend that has been accelerated by the rebound in industrial commodity prices that are sensitive to Chinese growth, as infrastructure investment is set to form a part of the Chinese recovery plan. Additionally, alternative iron ore producers, such as Brazil, are struggling with supply constraints.

The recent rise in gas exports amid falling energy prices is of particular relevance for Australia’s current account. Several years ago there was an expectation that the profit associated with these exports would be sent abroad, offsetting the gains on the goods balance with losses on the income balance1. However the fall in gas prices has significantly reduced the profitability of this activity even as the value of exports has still risen due to the huge increase in volumes.

When combined with the falling interest payments to foreign holders of Australian debt, the income balance is actually improving along with the goods balance. Furthermore, the hit to consumption from Covid-19 and related lockdowns has also reduced demand for imports, creating a sweet spot for real economy flows to support the Australian dollar.

While Australia and much of Asia are making far quicker progress than other advanced economies in reducing the spread of Covid-19 and safely exiting lockdown, the challenges faced by tourism and education exports remains significant. On balance we expect the boost to the Australian dollar from close links to the Chinese industrial cycle to exceed the drag from relatively high exposure to these key service sectors, where restarting activity is likely to be most challenging. This view requires careful monitoring.

The Australian dollar had already fallen behind the US dollar as the “AAA carry trade” in the last two years, and now offers little yield advantage even against persistently low yielding currencies, such as the euro and yen.

However, we do not expect the lack of a yield advantage to significantly weigh on the currency, mainly due to the implementation of Australian quantitative easing (QE) and the impact of the Federal Reserve’s aggressive easing on the US dollar, along with the adjustment to the Australian dollar’s valuation in recent years. When we evaluate the approach to QE taken in Australia, it is striking how the yield curve control framework has resulted in lower volumes of Reserve Bank of Australia (RBA) purchases when compared to international peers.

Australia’s relatively strong fiscal position compared to other indebted advanced economies may also mean lower volumes of central bank debt purchases are needed as the challenge of paying for the exceptional fiscal support required during the pandemic unfolds over the coming years. If we use the shadow rates framework we have followed over the last few years as a guide to how fixed income flow pressures affect currencies in other QE markets, such as Europe, it suggests the effect of RBA policy on the yield curve has delivered less “easing” than the US, resulting in the shadow rate spread moving in favour of the Australian dollar. 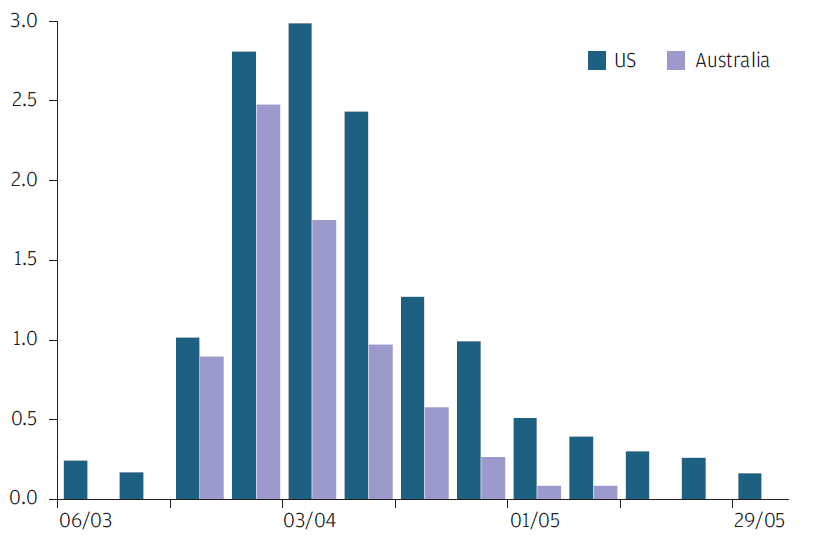 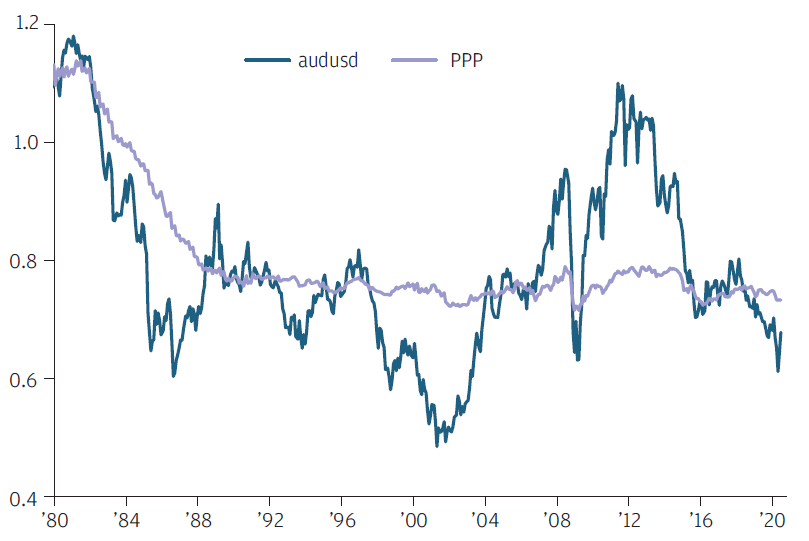 Global growth is above trend, but changes to U.S. trade policy and the impact of higher U.S. rates have increased risks to our outlook. We overweight stocks, but trim our positioning, upgrade duration to a small overweight and remain neutral on credit.

This is a sister publication to Guide to the Markets, delivering insight on macro topics like fundraising and manager dispersion, while also diving into real estate, infrastructure & transport, private credit, private equity and hedge funds in detail.