What is in the Chinese fixed income universe? 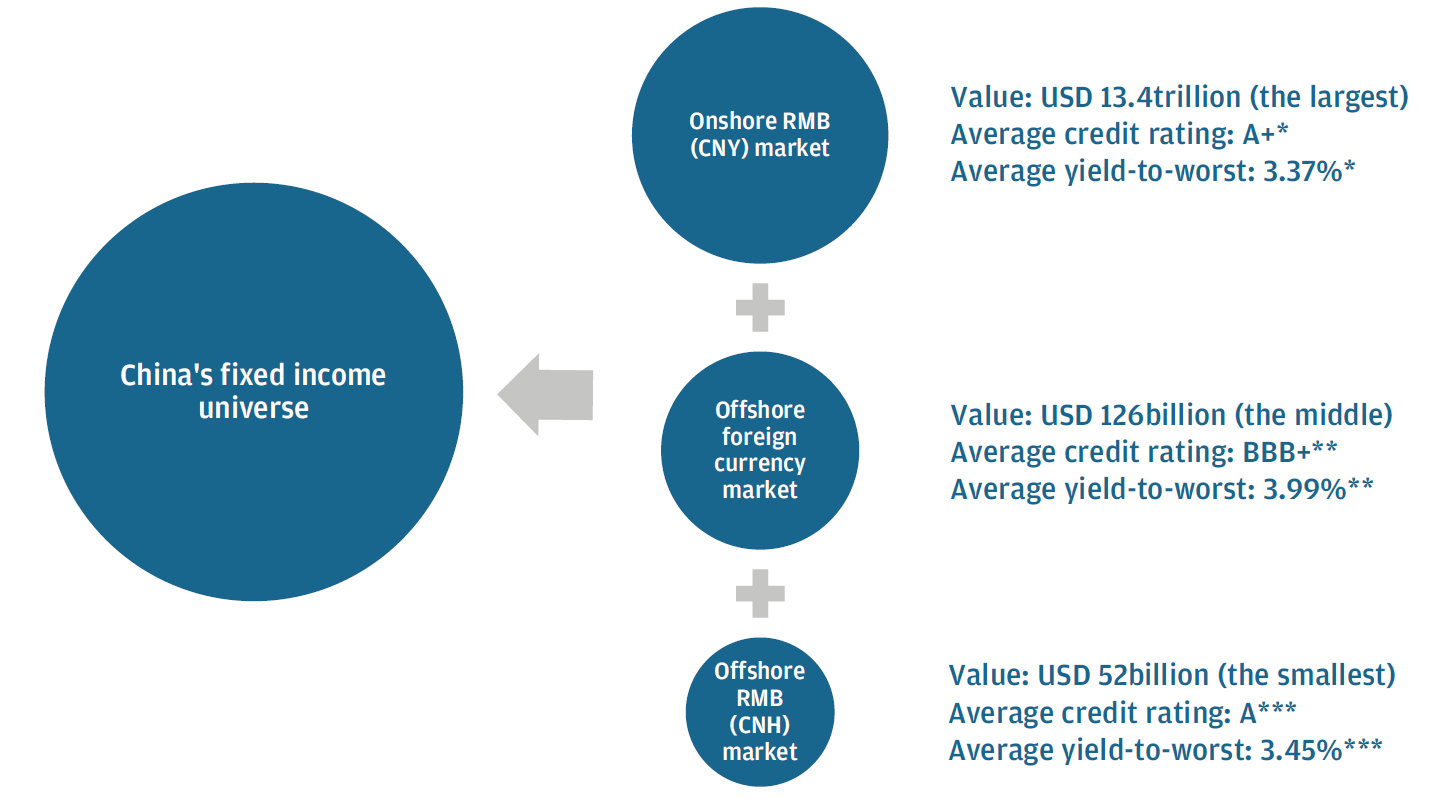 These three markets should be considered independently due to the differences between the investor base and market dynamics in each. (Further discussion will be included in the upcoming Paper #3 Characteristics of Chinese bonds.)

The Chinese government had only issued bonds onshore until July 2019, when it conducted its first issuance of CNH government bonds in Macau. However, government-linked entities like state-owned enterprises and some local government-linked property development corporations have been aggressive users of the offshore financing channel.

Before discussing investment strategies or the appropriate place for Chinese bonds from any one of these three markets in a portfolio, it is essential to understand the structure of the Chinese bond market and the nuances of accessing each of these three segments.

Debt versus bonds: Not the same thing!

While China’s high ratio of debt to gross domestic product (GDP) presents a concern around financial stability, the majority of this debt is created through bank loans, either through standard loans or the more headline-grabbing shadow banking products, on the balance sheets of financial institutions.

The part of China’s debt pile listed as a security on a public market—debt in the form of a bond where the borrower is a company or government and the lender is an investor, rather than in a loan from a financial institution—is much smaller than the headline debt-to-GDP number would suggest.

These three markets, onshore, offshore and foreign currency bonds, collectively represent around 100% of GDP versus overall Chinese debt, which totals around 259% of GDP (see Exhibit 2). To put these numbers in context, China’s overall debt level is comparable to the U.S. (249% of GDP), but bond market penetration lags the U.S. In the U.S., the bond market represents around 134% of GDP.

Investors should be aware of this disparity between debt and bonds when considering investing in Chinese fixed income.

A country's total borrowing can look very different than its bond market
EXHIBIT 2: DEBT AND BONDS AS A % OF GDP
Total market value of debt and bonds, nominal 2018 GDP

Source: BIS, Bloomberg Finance L.P., IMF, J.P. Morgan Asset Management. Debt valuation is as of 1Q19, bond valuation is as of October 31, 2019.
*The difference in Japan's government borrowing in debt and in bonds is due to the differing valuation dates.
**Government bonds include onshore-listed central and local government bonds for all countries.
***Corporate debt is borrowing by non-financial corporations; Corporate bonds are all onshore-listed corporate bonds.
****Household borrowing is only accounted for in total debt as individuals do not issue bonds. Data are as of October 31, 2019.

Who lists and who owns:

Due to the complexity of regulations around which parts of the government can issue debt, the central government’s heavy reliance on policy banks to promote growth and the responsibility of local (provincial and city level) governments to largely fund projects in their area despite lacking a robust local revenue base, this government share of the onshore bond market should really be thought of as three different types of bonds:

Offshore listings are accessible either through an offshore clearing center, such as Hong Kong, or as part of the majority of emerging market (EM) corporate bond indices. In the J.P. Morgan Asia Credit Index, for example, Chinese issuers make up around 51% of the index.1 This is why investors in EM corporate debt markets, particularly Asia high yield, cannot ignore the offshore segment of the Chinese bond market.

Direct investment in the onshore market is possible through institutional investor programs or via the Bond Connect Scheme, both of which offer access to any bonds listed onshore.

International investor interest in the onshore Chinese fixed income market has been rising as access has widened in recent years. This interest, however, has not been accompanied by a great deal of capital. We believe this is changing.

Widening access for international investors, as well as the effects of benchmark inclusion (details will be covered in the upcoming Paper #4 Chinese bonds go global), has drawn increasing investor attention. The relative stability of Chinese yields and the low correlation of Chinese bonds to other fixed income markets has also drawn interest.

Foreign investors’ share will naturally rise as access widens and benchmark inclusion of these bonds drives flows. For investors tracking fixed income benchmarks, China could come to represent 6% of the Bloomberg Barclays Global Aggregate Bond Index and 10% of the JPM GBI-EM by the end of 2020.

In short, China’s fixed income universe is a multi-faceted one made up of three different markets with dramatically different characteristics. In addition to considering the relative benefits and drawbacks of the onshore, offshore and foreign currency markets, investors need to keep in mind the variety of classifications across sectors and what may or may not be listed in any individual market.

The onshore market is by far the largest and, combined with recent accessibility gains for international investors, is drawing the most attention. As such, we will focus primarily on this segment of the Chinese bond market in the following papers.