Allocating to fixed income has been a never-ending source of headaches for multi-asset investors in recent times. After a long bull market, yields had reached the point where government bonds could no longer offer either of the key characteristics that they are typically expected to deliver: 1) income, and 2) diversification against risky assets. At one point, a staggering 90% of the global government bond universe was offering a yield of less than 1%, forcing investors to take on ever greater risk in extended credit sectors that had much higher correlations to equities. Low starting yields had also diminished the ability of government bonds to deliver positive returns that could offset losses during equity bear markets (Exhibit 8).

Exhibit 8: The proportion of government bonds that offered no income has finally receded

Source: Bloomberg, BofA/Merrill Lynch, J.P. Morgan Asset Management. Index shown is the BofA/ML Global Government Bond index. Past performance is not a reliable indicator of current and future results. Data as of 31 October 2022.

This year’s record-breaking drawdown has added to fixed income investors’ woes. Surging inflation, central banks desperately trying to play catch-up and governments that had seemingly lost their fear of debt, have all combined to trigger a brutal repricing. Markets have had to totally rethink the outlook for monetary policy rates and the risk premium that should exist in a world in which central banks cannot backstop the market. The drawdown in the Bloomberg Barclays Global Bond Aggregate in the first 10 months of 2022 was around -20%, four times as bad as the previous worst year since records began in 1992.

Crucially, while the correction in global bond markets has been incredibly painful, we believe that it is nearing completion. Further hikes from the central banks are likely in 2023 as policymakers continue to battle inflation. Yet with the market now pricing a terminal rate close to 5% in the US, around 4.5% in the UK and near 3% in the eurozone, the scope for further upside surprises is significantly diminished provided that inflation starts to cool. This is a key difference versus the start of 2022: this year’s problem has not only been that the central banks have been hiking rates aggressively, but that they have been hiking by far more than the market expected.

Looking forward, it is clear that the income on offer from bonds is now far more enticing. The global government bond benchmark has seen yields rise by roughly 200 basis points (bps) since the start of the year, while high yield (HY) bonds are again worthy of such a title with yields approaching double digits. Valuations in inflation-adjusted terms also look more attractive – while the roughly 1% real yield on global government bonds may not sound particularly exciting, it is back to the highest level since the financial crisis and around long-term averages.

What about the correlation between stocks and bonds? What has been so punishing for investors this year has been the fact that bond prices have fallen alongside stock prices. This could continue if stagflation remains a key theme through 2023. While our base case sees stocks and bonds staying positively correlated in 2023, we think this time both asset classes’ prices will rise together. If inflation dissipates quickly, we could see central banks pause their tightening earlier than forecast or even ease policy, supporting both stock and bond prices.

The potential for bonds to meaningfully support a portfolio in the most extreme negative scenarios – such as a much deeper recession than we envisage, or in the event of geopolitical tensions – is perhaps most important for multi-asset investors. For example, if 10-year US Treasury bond yields fell from 4% to 2% between November 2022 and the end of 2023, that would represent a return of c.20% which should meaningfully cushion any downside in stocks (Exhibit 9). Such diversification properties simply weren’t available for much of the past decade when yields were so low.

Given this uncertainty about inflation and growth, and the chunky yields available in short-dated government bonds, investors might want to spread their allocation along the fixed income curve, taking more duration than we would have advised for much of the year.

Exhibit 9: The reset in yields has boosted the diversification potential of bonds

Total return scenarios by change in US Treasury yields
%, return at end-2023 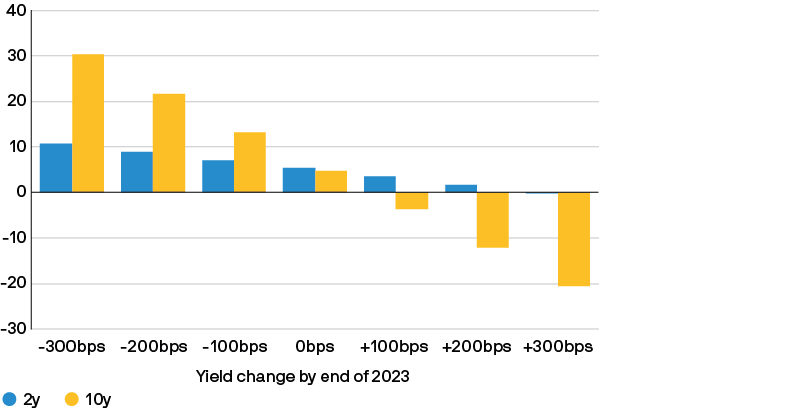 Source: Refinitiv Datastream, J.P. Morgan Asset Management. Chart indicates the calculated total return achieved by purchasing US 2-year and 10-year Treasuries at the current yield and selling at the end of 2023 for various year-end yields. For illustrative purposes only. Past performance is not a reliable indicator of current and future results. Data as of 31 October 2022.

Within credit markets, we believe that an “up-in-quality” approach is warranted. The yields now available on lower quality credit are certainly eye-catching, yet a large part of the repricing year to date has been driven by the increase in government bond yields. Take US HY credit as an example, where yields increased by around 500 bps in the first 10 months of 2022, but wider spreads only accounted for around 40% of that move. HY credit spreads still sit at or below long-term averages both in the US and Europe. It is possible that spreads widen moderately further as the economic backdrop weakens over the course of 2023.

The reset in fixed income this year has been brutal, but it was necessary. After the pain of 2022, the ability for investors to build diversified portfolios is now the strongest in over a decade. Fixed income deserves its place in the multi-asset toolkit once again.

We think equities in the developed markets will have positive returns in 2023. Our 2023 Investment Outlook details which types of stocks we think are most attractive.